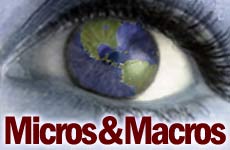 How do we face the challenges of these most significant days?

The famous question is asked: Why doesn't Yom Kippur ― the Day of Atonement, come before Rosh Hashana ― the Day of Judgement? Shouldn't we first be forgiven and then judged? And what's the difference between these two holidays, anyway?

The difference is that Rosh Hashana deals with general goals and commitments, while Yom Kippur deals with specifics ― i.e. meticulously examining every one of our actions. Rosh Hashana is determining what it's all about. Yom Kippur is taking the values that were expressed on Rosh Hashana and measuring our behavior against them.

Rosh Hashana must come first, because if you focus on details without first focusing on the big picture, your commitment to change will be petty. Only when you have a clear sense of direction can you view your actions realistically. Change only comes if there's a real "new you," and that new you is born on Rosh Hashana, the day humanity was born.

To properly utilize both holidays, you must take care not to confuse them. Don't think of the preparation for Rosh Hashana as "reviewing your actions and committing to being better." That's missing the point, and the liturgy of Rosh Hashana has very little mention of it. Similarly, on Yom Kippur you can't get away with doing Teshuva in general terms. Just like Rosh Hashana is only effective if you concentrate on a general framework, Yom Kippur won't do the job unless you focus on the details.

We spend the month of Elul preparing for Rosh Hashana. But when the big day arrives, it's not uncommon for people to behave in a way that's completely detached from all the preparations. This is because there's a natural fear when we imagine "God and judgment." Yet the Sages tell us explicitly that you're not allowed to confess on Rosh Hashana. Don't get scared and think of transgression, even though it's the Day of Judgement. Keep the confidence that what you need for a successful Rosh Hashana is a basic commitment to the right values.

The way to do this is to ask the question: "What am I living for?" It's not necessarily difficult to answer, but the hard part is you have to mean it. Are you really interested in changing ― or is this just lip service?

On Rosh Hashana we speak about making God our King. This means giving the Almighty a vote of confidence that life is beautiful even if it involves struggle. That's because the reality of God is that He will often bring us struggle in order that we should grow.

At the beginning of "Path of the Just," Luzzatto's classic work of Jewish ethics, he writes: "What is man's responsibility in life? To take pleasure in God."

Getting this clear is the singular message of Rosh Hashana. The one true aspiration of every human being is to get close to God. Remember that we're not forced into it. God isn't a tyrant. He rules as a popular King and we want it. (Though of course He cannot be deposed!)

The Sages teach that there is one true measure of man: How much "fear of Heaven" he has. This is the measuring-rod of a person's connection to reality.

What is this fear of Heaven? Look to all the diverse aspects of your life ― your personality, environment, knowledge and experiences. Even though every situation contains a different struggle, both in degree and kind, that's only superficially. In actuality, deep inside there's one point, one sensation that's all the same. This is what we call "fear of Heaven." It's the one point that ― regardless of where your particular struggles lie ― determines whether you're fighting or not.

The Sages say: "Everything is in the hands of Heaven, except for fear of Heaven." How do you work on fear of Heaven and acquire more of it? This is what Rosh Hashana is all about ― determining what it is you're living for and driving it home again and again and again. Energizing yourself and giving yourself more and more desire to fight and win, becoming more confident that you will win, building on the small victories. It's the basic commitment to fight and win, with no thought of surrender, whether the issue is part of your nature, or something beat into you by your environment and society.

If you've got the energy, you can take on anyone and anything. On Rosh Hashana you develop the energy by making God your King. It's a commitment to fight. It's joining the army, but with a difference: it's all one-to-one combat, for each of us has our own battles. That's the one point you have to work on during Rosh Hashana. Then you must apply it to the particular issues you identify with in preparation for Yom Kippur.

This time of year includes a great deal of formalized prayer. Even if one particular prayer doesn't have meaning for you, you're still required to say it. Of course, concerning the depth of feeling, everyone is an individual. Some prayers speak to you and others don't. The Sages say that when Rabbi "X" read verse "Y," he cried. Him and no one else. We each have a verse that deals with an issue that is vitally important to us.

Yet we pray as a community because we have to go beyond our own struggles. Although we have our individual battles, ultimately the battle is for fear of Heaven ― and we all share it. In terms of determining the fate of the Jewish nation, that one point is what will make the difference. Even though your friend isn't with you when you face your own issues, and the weapons and strategies you use will be different than his, we must recognize that we're all fighting a similar basic issue. The battle is to determine if we're soldiers or deserters.

If you understand it in these terms, you'll be there while others are fighting their battles. Are you part of the Jewish people or not?

This Rosh Hashana, let us make the commitment. Together we can win.

The Only Thing to Worry About on Rosh Hashanah
Should I Break Up, Get Engaged or Keep Dating?
Time Is Your Precious Commodity
A Constant World in Flux
Comments
MOST POPULAR IN The High Holidays
Our privacy policy