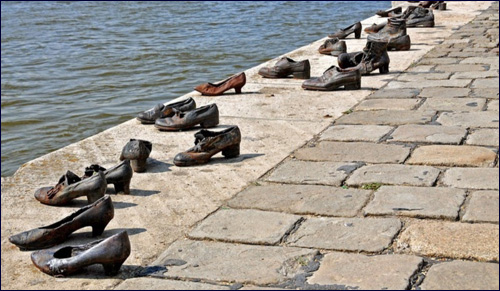 A moving sculpture memorializes Jews who were murdered in broad daylight along the river.

My husband and I recently took a trip to Budapest and visited a variety of Jewish sights. We were overwhelmed by the magnificence of the Dohany Synagogue, the largest in Europe. We wept outside the synagogue where monuments mark the bodies of several thousand Jews shot in the courtyard. The Holocaust Memorial Center recreated the rich culture and history of Hungarian Jews. Then the shadows of Jews marching to their deaths along the Memorial Center's long, dark hallways made us feel as if we, too, were headed for death. Ominous music played in the background and the effect was chilling.

But the Budapest sight which moved us the most was the smallest: "The Shoes on the Danube Promenade." 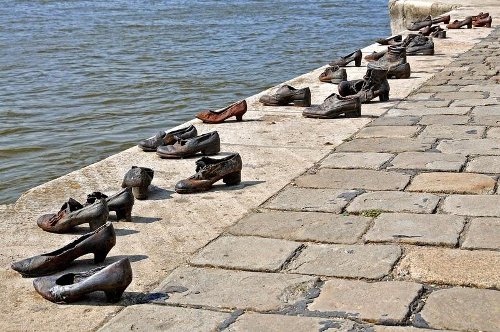 Gyula Pauer, a Hungarian sculptor, completed this work of art in 2005. It consists of 60 pairs of iron shoes to memorialize the many Jews who were murdered by The Arrow Cross along the banks of the Danube. These killings took place up and down the river, and the sculpture represents only one of the locations. The exhibit sits on the Pest side of the Danube near the Parliament Building. Three commemorative plaques (one in English, Hungarian and Hebrew) state: 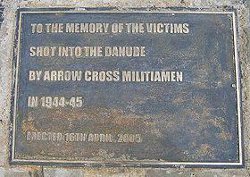 "To the memory of victims shot into the Danube by the Arrow Cross militiamen in 1944-5."

The experience of Hungarian Jews during World War II was unique. Although Hungary allied itself with Nazi Germany, its largely integrated Jewish population initially escaped much of the fate of other Eastern European Jews. But Germany began to fear that Hungary might turn and side with the allies, so German troops occupied the country in March of 1944. The Germans hoped to make economic use of Hungary.

And there were too many Jews to ignore.

The Germans legalized The Arrow Cross Party (the Hungarian version of The Nazi Party) and deported hundreds of thousands of Hungarian Jews to death camps during the spring of 1944. Sensing a weakening of government resolve, the Germans eventually put Ferenc Szalasi in charge. Szalasi was also the head of The Arrow Cross Party, and from October, 1944 until January, 1945, Arrow Cross militiaman terrorized and murdered Hungarian Jews. Many of these murders took place along the banks of the Danube. Jews were shot and thrown into the freezing river. Currents carried the bodies of the dead and dying downstream. This was ideal for The Arrow Cross. After all, they did the killing; let someone else deal with the bodies.

Shoes had black market value, and Jewish victims were ordered to remove them at the river's edge. The sculptural, life-like shoes are different shapes and sizes, a mix of men's women's and children's. Fancy shoes. Sporty shoes. Tattered shoes. They have one thing in common: they were all worn by Jews. 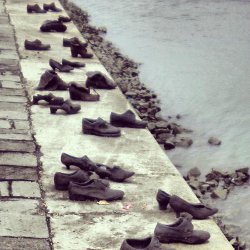 The shoes in the sculpture are not neatly lined up, for the actual victims yanked these shoes off surrounded by men brandishing guns. Some shoes are scattered. Others lie on top of each other. There are a few single shoes. Several shoes are missing a lace.

They were murdered in the open by people they knew, in the middle of a city.

Shoes are part of our identity. They make a statement about who we are or hope to be. They take us where we want to go. They give a person dignity. And when viewing this sculpture, it is difficult to avoid a heartbreaking, almost voyeuristic curiosity as to whom the shoes belonged to and the lives the owners might have led under normal circumstances. What did that man do for a living? Did that woman ever stroll along the riverbank with her sweetheart? How many years until that little boy's bar mitzvah? Did he laugh when he skipped stones in the river with his friends? What might he have become?

The sounds of the actual events were undoubtedly a tangled mess of gunshots and screams. Although "The Shoes on the Danube Promenade" is located in an extremely busy area, it evokes an incredible stillness. As my husband and I studied the sculpture, the noise of the city dissolved into nothingness, an echo. And when the sounds of the city returned to our consciousness – horns beeping, engines revving, people chattering, clocks chiming – my husband and I were struck by the most terrifying aspect of "The Shoes on the Danube Promenade": The open nature of the killing. 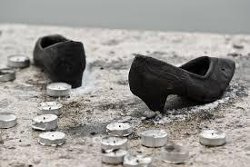 The Jewish victims on the riverbank were not blindfolded. They probably recognized some of their murderers amongst the ranks of The Arrow Cross. And no doubt the Hungarian bystanders, who either approved of these murders or did nothing to prevent them, knew the victims or members of The Arrow Cross. True, the wartime Budapest was less populated and not crammed with tourists, but this slaughter along the Danube still took place in a city. These Jews were not whisked off to the camps "in secret." They were not herded into the middle of the woods. They were murdered in the open by people they knew, in front of people they knew, and in the middle of a city. The shots were fired, the bodies floated down the river, the shoes gathered up and the Arrow Cross continued to hunt for more Jews to murder.

And the friends, neighbors, co-workers who stood around and watched? They walked away in their comfortable shoes.