Q&A for Teens: Lazy and Unmotivated 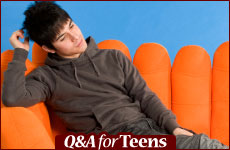 A lesson in alacrity from the Japanese.

I'm feeling lazy and unmotivated. I'm not sure what to do. I’d like to be more productive. Do you have any advice for me?

Do I ever have advice for you! It’s so perfect that I got your question now, because I just returned from a trip to Japan. And my advice is to train yourself, Japanese-style!

I didn’t see the new Karate Kid, but I saw the old one. In fact, the message of that film was so profound that my high school showed it to us for a school event. The message: you can train your brain and your body to be disciplined, focused, and capable. And a great way to do it is Japanese-style. Wax on! Wax off!

For those of you who didn’t see the film, listen to what I saw in Japan last week, and you’ll understand the mental and physical discipline I mean.

We took a series of car services to and from airports in Japan, as we traveled from city to city there. Each driver of the car service was the same: he would find us in the airport, escort us outside to the curb, wearing his proper, white button-down shirt, dark slacks, vest, and white gloves (!). Then he would say, “Please wait here a moment. I bring the car.” Then he would run to get the car, then gently lift and place each of our suitcases into the trunk. We tried to help with our bags, but he would just bow to us and smile, saying, “No, I do. I do. Thank you.”

Then he would drive sitting up straight, both hands on the wheel, quietly and gently and swiftly taking us to our destination. As my husband, the responsible worker that he is, said in amazement: "I don't think I've ever seen such a work ethic. In any country. Ever."

For a moment, let us compare those car service drivers in Japan to the car service driver we had in a certain other country. He presented as a lazy oaf, who communicated with a series of grunts, who threw our suitcases haphazardly and halfheartedly into his messy trunk, then drove with one hand slung over the wheel, one hand resting on the open window, listening to his loud music…

Now, get this: no porters or taxi drivers in Japan would accept tips. I was told about this by the flight attendants on our way there. And it was true! The attitude is: "This is my job, and I work responsibly and gladly." When I tried (numerous times) to extend generous tips, the response was always the same: bowing, smiling, hands up in denial, "No, thank you. No, thank you."

Everywhere I turned in Japan, I found the Japanese to be: responsible, decorous, industrious, calm, quiet, gentle, precise, organized, and spanking clean. And I absolutely believe these are all traits that can be cultivated and learned, not traits that are either inherently there or not. You can train yourself to become “more Japanese!”

Consider the training of Japanese children. Every day, Japanese children clean their school for half an hour. They have no janitors! They are responsible for cleaning their environs. Every day, they push back their desks and have a division of labor for sweeping the floors, scrubbing the floors, cleaning the bathrooms, dusting the shelves, putting away the books, cleaning the windows…. The Japanese are not afraid of work. And they are trained to contribute their efforts to the community.

The training children get is obvious all over the country: I have never, ever seen such clean cities. I even took a picture of the curb to show everyone how amazingly clean the streets were. There were no garbage cans anywhere on the streets or in public places. We asked numerous people about this, and they told us, “We take our garbage with us and deposit it at home.” Seriously, I could not find a speck of dust or dirt in the airports, in the subways, in the hotels, in the streets – and we were in many different cities and parts of cities! Even the open-air fish market was clean!

It’s all about training. Last year, a medical meeting took us to a certain foreign country. When we went to the tariff office to reclaim our sales tax expenditures, we found the door cordoned off, with a "Closed" sign hanging on it. The times in the "Open Hours" plate next to the door dictated that it should have been open, so we found an airport official & asked her when the office would open. She pulled away the cordon, and – lo and behold! – there was the tariff officer, reclining in his chair, smoking a cigarette, reading a book, his feet up on his desk and crossed at the ankles!!

That's not Japan. In Japan, I saw industrious men and women, quietly and conscientiously walking to work, briefcases in hand, posture erect.

I visited a department store, and noticed worker after worker bowing at the waist upon exiting or entering a certain hallway. I asked someone (after taking many pictures of the bowing workers!) what they were doing, and they explained to me, “They are leaving or entering the public domain, so they turn and bow to the people before they exit or enter.” That’s decorum training. I want you to know – I have never been bowed at so many times in my life! Anyone who did anything for me bowed to me as I approached them and as I left them, from the hotel clerks to the street vendors to the airline security staff. That’s respect-for-others training.

Another point for you, if you want to get into responsible, alacrity, productivity-mode: people don't do well when they’re tired. If you want to be at your “fighting best,” get enough rest. This lesson I learned not from the Japanese, but from myself and my own bad behavior!!

Here’s what happened: my husband told me I was being cranky and crabby. I responded very poorly, insisting that he was the one being unreasonable and difficult. (Sound familiar?) Then I went into our hotel room to get my sunglasses, said to myself, "Let me just sit down for a minute before I continue my touring," and proceeded to wake up seven hours later (!!!) much less tired and much less cranky! The very first thing I did upon awakening was apologize immediately to my husband, telling him how right he had been.

If you're having a bad day, or having a bad interaction with those near and dear to you, or if you’re not feeling as productive as you would like to be, consider taking a nap! You might wake up a different person than you were when you went to sleep.

One more point I noticed in Japan, and which might help you in your quest to be more productive and to feel less lazy, had to do with diet and exercise. In terms of their diet: instead of chocolates and candies for sale in the airports or on the streets, there were raw fish pieces for sale, some with a bit of rice and aduki beans, with shredded cabbage and carrots on the side. They don’t eat or drink on the street. They will sit in, for example, Starbucks, drink their small cups of tea there, then bow to the server and leave. Needless to say, the vast majority of Japanese people were thin and trim. I saw many elderly people walking sprightly along the street. In terms of their exercise: most of the Japanese I saw propelled their lean frames forward efficiently with completely erect posture. Some older Japanese people walked stooped, but most were spry and agile, even though their faces showed advanced age.

If we, too, would eat very little, stay calm, work consistently, stand straight, walk briskly, and eat fish and beans and unsweetened tea instead of chocolate, candy, and heavily sweetened coffee, we would probably age well, and have lots of extra energy along the way.

You ask how to feel more motivated and less lazy? As it says in Ethics of the Fathers, “Who is wise? The person who learns from everyone.” In this case, we would be wise to learn from the Japanese! Our sages teach that “outer actions create an inner feeling.” You can train yourself. If you act with alacrity, responsibility, industriousness, and decorum, your inner feelings, your motivations, will become full of alacrity, responsibility, industriousness, and decorum.

So: get a good night’s sleep. Clean and organize your workspace. Dress professionally. Sit up straight. Walk briskly. Respect the people around you.… Train the “laziness” right out of you, and the serene, calm, alacrity right into you.

How You Can Deal with Pain

Listening to My Parents?

Q&A for Teens: How Can I Change My Friend?

Q&A for Teens: Cliques
Don’t Believe in Other Gods Versus God is One
Seeing Without Eyes
Why Shouldn’t We Eat Whatever We Want?
Comments
MOST POPULAR IN Current Issues
Our privacy policy
Aish.com Is Looking for Great Writers