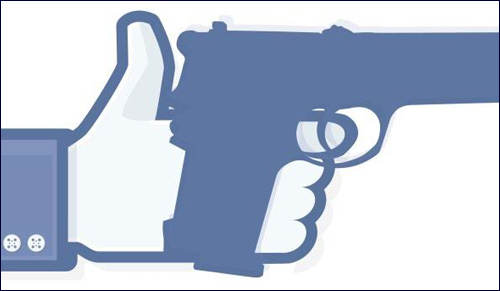 Social media has become a new frontline in the war on terror.

“Poison the Knife before You Stab.” “The Intifada Has Started.” “Slaughtering the Jews.”

Since the explosion in violence in Israel in October 2015, scores of terrorist attacks – using knives, using cars as weapons, and guns – have left dozens of Israelis dead and maimed.

As the violence has spread, so has online incitement, as extremists cynically manipulate social media to call for ever more attacks against Jews.

The “Knife Intifada” hashtag has featured tweets such as this one: “We are coming to slaughter you, just you wait”, alongside a picture of a Palestinian holding a knife.

Kuwaiti lawyer and radio personality Mashari Al-‘Ayada sent out a copy of a security video showing a terrorist stabbing three Jews in Jerusalem’s Old City – along with the message, "The settler pigs are banned from [passing] in the alleys of ancient Jerusalem. A Palestinian hero stabs three Zionists. [People] like him are our pride and our honor.”

YouTube is another site that features calls to violence. One typical video, uploaded by Hamas, featured actors dressed to look like Jews bullying children. The video then shows a Palestinian bystander getting fed up, finally "stabbing" the actor playing a Jew in the heart.

Facebook has also become a portal to incite violence against Jews and others. One picture posted on Facebook shows a Jewish stabbing victim, a knife still embedded in his neck with the caption “Stabbing operation… The Intifada has started…. There is nothing greater than a knife penetrating the heads of the Jews.”

Facebook pages such as “Palestine Now” – which has featured a picture of a man making a “victory” sign with his fingers, which are drawn as knives – and “Mobilize for the Third Palestinian Intifada” – which features a picture of a bloody knife and gun with the caption “The methods are different. The goals are the same” – are clearly designed to incite violence.

Facebook also recently allowed the parents of a baby in Gaza to tell the world they’d named their newborn son “Knife of Jerusalem” in order to encourage further terror attacks. A friend of the father’s explained that naming the baby was his idea – because he knew it would gain traction on Facebook. "It was my idea” the friend told journalists: “and I published the post on Facebook. I felt that this would gain lots of attention on the social media.”

Although posts like these clearly violate Facebook’s own standards against promoting hatred, they – as well as other social media sites – have been reluctant to take down posts encouraging people to attack Jews – even when they are willing to act more quickly against sites promoting other types of hatred.

In January 2016, Shurat HaDin – Israeli Law Center posted the results of their “The Big Facebook Experiment”. The group set up two identical Facebook pages: one called “Stop Palestinians” and one “Stop Israel.” They then uploaded increasingly hateful – and identical – content to each page. Finally, they reported both pages to Facebook. The results showed a clear double standard, with incitement against Palestinians considered out of bounds, while incitement against Jews was dismissed: the “Stop Palestinians” page was immediately taken down the same day it was reported, while Facebook allowed the “Stop Israel” page to remain up – with its hateful content intact.

It was only after a video explaining the experiment went viral that Facebook took steps to shut down “Stop Israel” and remove the inciting posts. Unfortunately, other pages – many with even more shocking content – remain up and active today.

In one case, a UN school’s official Facebook page featured a picture of terrorists ramming a car into crowds of Israelis, and included a play on words, superimposing the Arabic word for “run over” – “daes” – with “Daesh”, the Arabic term for Islamic State. One UN official used his title when he posted on Facebook that people should “stab Zionist dogs”. Another UN official uploaded an infamous video featuring a mosque sermon in which a sheikh urges people to murder Jews in the name of Islam. Mohammed Assif, a Palestinian pop star who is a UN “Youth Ambassador” used his UN title when he uploaded a video of himself singing a song that encourages attacks against Jews on his Facebook page.

The situation got so serious that, after local UN officials resisted repeated calls by Jewish groups to remove the offending pages from social media, UN Secretary General Ban Ki-Moon stepped in himself, suspending UN employees and docking pay to some. Many of their posts, however, continue to live on in the internet, inciting further violence.

Online Incitement is illegal – in the United States, where many of the leading social media sites are based – and internationally as well.

The US Supreme Court has ruled that “advocacy of the use of force” when “such advocacy is directed to inciting or producing imminent lawless action and is likely to incite or produce such action” is illegal. The International Covenant on Civil and Political Rights echoes this common-sense approach, prohibiting incitement: “Any advocacy of national, racial or religious hatred that constitutes incitement to discrimination, hostility or violence shall be prohibited by law” (Article 20).

We can also encourage social media companies to enforce their own rules against posted hatred and inciting terror.

20,000 Israelis are suing the Facebook, seeking them to implement their own guidelines and start shutting down page that encourage violence against Jews. “Facebook’s refusal to remove the flood of extremist videos, statements and cartoons being posted by Palestinians is encouraging imminent violence and fanning the flames of the terrorist attacks that have overwhelmed Israel in the past month,” the lawsuit declares.

Richard Lankin, a 76 year old Israeli-American, is the lead plaintiff. He was shot in the head and stabbed multiple times on a Jerusalem bus October 13, 2015. But other Israelis have joined him, as well, in the case. Facebook is putting them all in danger, they assert, by failing to remove incitement to violence. We “have been living in the crosshairs of a murderous terrorist rampage carried out by killers who attack people with knives, axes, screwdrivers, cars and Molotov cocktails for no reason other than that the attacker perceives the victims to be Jewish”, they explain in the case.

As online incitement continues, we can take to our computers – writing to parent companies, complaining about inappropriate content, and encouraging our friends to do the same. Let’s do our part and fight on this frontline of terror.

My Encounter with the Pope
Why My Iranian Mother Didn’t Want Me to Become a Religious Fanatic
The Jewish History of Prague
Why the Sexual Revolution was Bad for Women
Comments
MOST POPULAR IN Israel
Our privacy policy
Aish.com Is Looking for Great Writers