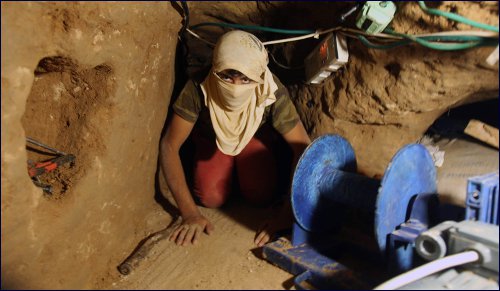 I am sick of apologizing for Israel when it is Israel that really deserves an apology.

I am sick of apologizing for Israel’s right to defend itself. I am sick of the word “ceasefire” when all that really means is “time for Hamas to build more rockets” while we stand by helplessly. I am sick of the UN calling this an Israeli-Palestinian War when all along it’s clearly been a prolonged terrorist attack that the IDF is courageously trying to stop. I’m sick of people criticizing Israel for killing innocent people when they have done more than any country to warn Gazans and have even brought the gunmen into their own hospitals. I’m sick of apologizing for being a Jew. For being part of a nation whose kindness and compassion shine through even on the battlefield.

Somehow the world is turning everything around. Turning the terrorists into victims. Turning the attacked into the aggressor. This is the anti-Semitism of today. A hatred and disgust with Israel no matter what we do. And now the FAA has put a ban on US flights to Israel, isolating us from each other as the rockets continue to fall.

Now I ask you. Who should be apologizing? The millions of Jews running for cover as rockets attempting to smash into their school yards and tear apart their homes come raining down? The parents of all the soldiers who have tragically died in this frustrating, dangerous ground war in Gaza, where every move is calculated and re-calculated to prevent the loss of life?

Should the soldiers apologize for risking their lives to fight terrorism while the rest of us shake our heads over the news? I am sick of apologizing for Israel when it is Israel that really deserves an apology.

Israel deserves an apology from the media for falsely portraying them as aggressors. From the anti-Israel demonstrators who would have never protested the fight against terrorists when it was their own country being attacked on 9/11. From the UN for blaming Israel for a war they didn’t begin. From the Jews who have turned their backs on their own people when they are needed most. From the terrorists themselves, for the constant panic and fear, for the horrific loss of life, for destroying our homes, for diverting our planes, for turning our lives upside down, and for putting innocent Arab lives in mortal danger. Israel deserves an apology.

And I also want to apologize to Israel and her courageous people. I am sorry for not defending you loudly enough. For not doing more to speak up against the staged newspaper photographs and the false criticisms. I am sorry for the hours in which I forget about the pain and the suffering that you are going through. I am sorry, dear parents of all the fallen soldiers. I am sorry for your aching grief and loss, sorry that you had to sacrifice your sons in this war for Jewish survival. Because they were not just fighting for Israel, they were fighting for all of us.

I apologize to all of you, who live in the only place in the world where every Jew is welcomed home, that you are not recognized on a daily basis for holding up the fort for all of us, for teaching your children to remain calm under fire, for sending your sons to guard our borders, for holding onto your faith when everyone around you is intent on taking it away.

And I also want to say thank you. Thank you to the Israeli government for not backing down in this battle for our survival. Thank you to the soldiers for giving up everything you have, including life itself, to keep us safe. Thank you to the people who live in Israel for continuing to build families and homes in our Land with rockets falling all around you.

Thank you, Israel, for being a shining light among the nations of the world. For being brave enough to stand up and fight against terrorism, even when the world prefers to close its eyes and shake its head. No more apologies.

We stand by you, Israel. We pray for you. We are proud of you. You are not alone.

Orphan No More
Lessons from the Book of Jonah
Where Are We? The Body, Brain, Soul Problem
Dr. Sheila Nazarian’s Escape from Iran
Comments
MOST POPULAR IN Israel
Our privacy policy
Aish.com Is Looking for Great Writers