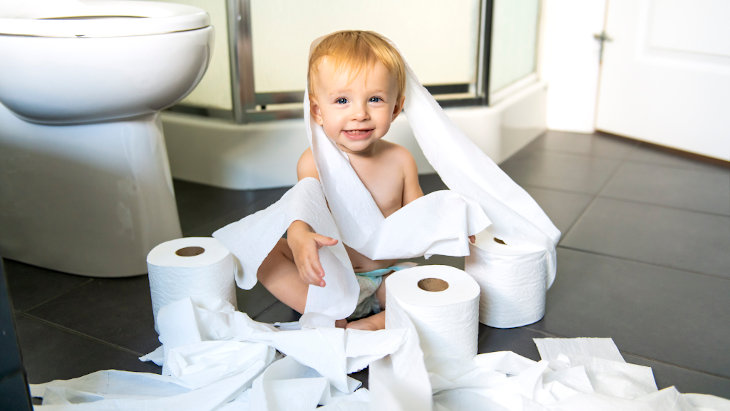 The scene: our two-bedroom with one bathroom, 4 kids under 7 and a newborn baby I just brought home. Today I tried to take a shower.

We've been enduring this quarantine with, thank God, four beautiful children ages 2, 4, 5, and 7. Last week, we were blessed to bring our newborn baby home from the hospital, exactly 24 hours after having given birth (due to new corona regulations). All of this in our two-bedroom apartment, on the fifth floor, with one bathroom!

Today I tried to take a shower.

About one minute in, my five-year-old came knocking on the door. She had been on her morning conference call when the phone died. I got dressed and helped her enter her access code from another phone line.

Take two. My two-year-old son waited about five minutes, and then, as if on cue, came to knock on the bathroom door. It was an emergency. He needed to use the bathroom. I got dressed and went to help him.

Exactly five minutes later, there was another knock on the bathroom door.

Not sure whether to cry or to laugh, I suddenly realized: I am Hillel!

The Talmud relates a story one man bet another that he could get Hillel angry. He waited until Friday afternoon, with the added pressure of preparing for Shabbat, and kept interrupting Hillel's shower to ask ridiculous questions. Hillel answered each query patiently. Ultimately, the frustrated man told Hillel that he had lost him 400 zuz. Hillel responded that it is better that he should lose the bet than that Hillel should become angry.

With the third interruption, I realized that God had recreated a similar wager to play itself out in our apartment. Would I be as patient as Hillel?

In fact, that wager has been playing itself out here for almost three months!

Could I be patient with a spouse trying valiantly to work from home despite the chaos?

Could I be patient with the Wi-Fi, the four simultaneous conference calls, and the technical troubleshooting?

Could I be patient with children who really could use a break from homeschooling and a chance to play in the playground?

Could I be patient with the people who could make it easier if they weren't so busy self-isolating?

Could I be patient with the tiny Lego pieces that we keep stepping on?

It hasn't been easy.

And I get to choose my own lines.

Today's aha moment was that with this coronavirus, I am being given a chance to recreate one of the Talmud's greatest stories about Hillel.

And today the opportunity was too obvious to miss. I kept my cool.

Let's see how I do tomorrow.

Slovie's Letter to Her Son on His Wedding Day