My Grandfather and Kristallnacht 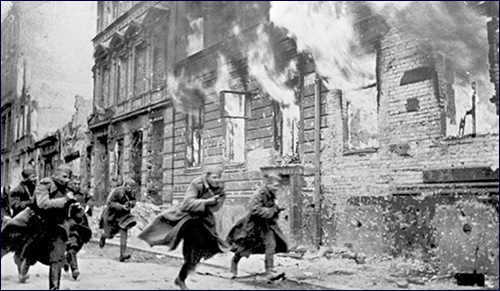 My grandfather woke up that morning in Berlin to see the synagogue engulfed in flames.

Kristallnacht marks the beginning of the end, leading to the destruction of European Jewry. It was a nation-wide pogrom of looting and beatings in which synagogues were destroyed and cemeteries desecrated. It was an event that shattered the hopes of a future for Jews in Germany and Austria, those who could then fled. It was a lot more than crystal that was shattered on that night. 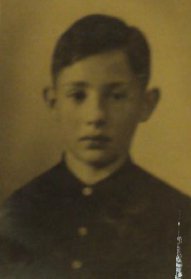 My grandfather as a child

My grandfather was born in Berlin in 1925, and named Norbert, or Natan. His father was a textile merchant, and his mother a housewife. They lived in a suburb of Berlin in an apartment opposite the Grunewald synagogue. In September 1938 he celebrated his Bar Mitzvah there. The warden of the synagogue, Isidore, whose daughter would go on to marry Norbert, had donated the Torah scroll that he read from.

On a Thursday morning, November 10, less than two months later, my grandfather woke up at 7 AM. He walked into the front room of his apartment and he saw the synagogue engulfed in flames. He ran to his father’s bedroom and shouted, “The synagogue’s burning!” His father immediately called the fire brigade. The fire brigade 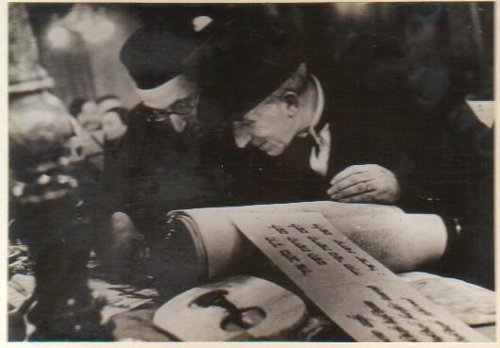 Isidore Dobrin looking over the Torah scroll he had just donated in Berlin.

responded that they were already informed, but had orders from higher authorities not to intercede. The synagogue was razed to the ground. In the 1950s the ruins were cleared and made into a residential building which still stands today.

But not everything was destroyed in the flames. When the caretaker of the synagogue noticed the fire he managed to save the Torah scrolls, wrap them up in blankets, and take them to Isidore’s house. A few days after Kristallnacht, at the risk of punishment, my grandfather managed to salvage a few prayer books from the charred remains as well.

My grandfather’s father had to hide in their maid’s house for over two weeks after Kristallnacht in order to avoid being sent to a concentration camp. He realized they needed to leave Germany.

Isidore was deported to Auschwitz and the fate of the saved Torah scrolls remains unknown.

Although they then managed to escape to Britain, the fires of Kristallnacht spread to consume millions of Jews in Europe. In 1943 Isidore, the warden, in whose house the Torah scrolls were hidden, managed to send his daughter on the Kindertransport, and she then married Norbert in 1963. However, later that year Isidore was deported to Auschwitz, where he perished, and the fate of the saved Torah scrolls remains unknown.

Seventy years later, Isidore’s grandson, my uncle, commissioned a Torah scroll to be written on the occasion of his son’s Bar Mitzvah, to ‘replace’ the one lost. Seven years later he took the scroll to Berlin and Auschwitz, before returning it back to Jerusalem.

My grandfather in old age

This story taught me that even though we have lost so much, we must strive to build what was lost. Like our sages state in Ethics of the Fathers, “It is not your duty to finish the work, but neither are you free to desist from it.” Although rebuilding everything we lost is impossible, we can never stop trying.

Seventy-six years ago the Germans pillaged and then set fire to our synagogues, burning them to the ground. But the only fire that continues to flicker is ours. The only flame burning in our synagogues is the eternal flame, the ner tamid, which stands over the Holy Ark, a fire that “will never be extinguished.”

P.S. Last year my grandfather, Norbert, attended a ceremony that marked the 75 anniversary of Kristallnacht. Attending it were 24 German-Jewish refugees, who had witnessed Kristallnacht with their own eyes. This year there will be only 23. My grandfather, who bore witness to the Nazi’s rise to power, is no longer in this world. He carried the burden of remembering his past; now we have the responsibility of carrying it forward to future generations to ensure it is never forgotten.

Gav Cohn is a 17-year-old student at Hasmonean High School in London.

Humanity's Litmus Test
The Power Of Prayer
Va’etchanan 5782: A for Effort
Can You Show Me This "God?"
Comments
MOST POPULAR IN Holocaust Studies
Our privacy policy
Aish.com Is Looking for Great Writers