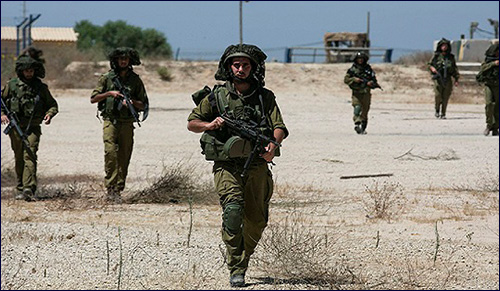 Married one month ago, my 20-year-old cousin is risking his life for Israel and the Jewish people.

Ben is from Portland Oregon. He’s only 20 years old, but he’s my hero.

Ironically, Ben used to look up to me. He’s my cousin. He was born when I was a teenager and I’ve watched him grow from a baby to a young man. I would often spend Passover with Ben and his parents Brian and Laurie, and I had fun hanging out with Ben and his brothers Will and Jon. I think they thought I was cool because I was the “big cousin.”

As Ben approached his graduation from high school, his friends were deciding which college to attend. But Ben didn’t choose Oregon State or an Ivy League school or even backpacking across Europe. Instead, he chose to spend a year in Israel at Bar-Ilan University. During his studies, Ben met a girl named Miriam from Denver, Colorado who was also studying at Bar Ilan. They had a lot in common: love of Judaism, love of Israel, and in time, love of each other. 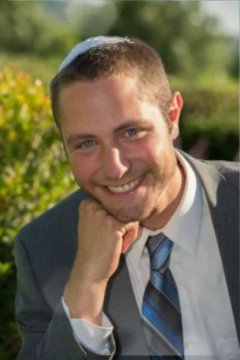 Ben at his wedding one month ago.

Ben looked back at his life in Portland and his new life in Israel. If life were a play, Ben felt that living in Portland was like sitting in the audience; living in Israel was like being on the stage. Ben, 19 years old, decided to make Aliyah to Israel. On his own.

Miriam also made Aliyah. She had some cousins in Israel, but Jerusalem is a long way from Denver, Colorado. After Bar Ilan, Miriam chose to spend a year in seminary enhancing her knowledge of Judaism that she loved so much.

And Ben, my “little cousin,” enlisted in the Israel Defense Force. When he could have been home in America going to frat parties or football games, he was in Israel putting his life on the line to protect the Jewish people. Now he was really home.

There’s an expression in Hebrew – a “bayit ne’eman b’yisrael,” a house built on the Jewish faith. For Ben and Miriam it was time to build that house. They got engaged and planned a wedding. Family and friends came to Israel to celebrate. Even cousin Richard.

At the ceremony the officiating rabbi said something poignant. He said that thousands of years ago, there was a song written just for Ben and Miriam. We have sung it countless times over the ages, in the many difficult times that we Jewish people have experienced. They sang: there will yet again be heard, in the hills of Judah and in the street of Jerusalem, the sound of joy and merriment, the sound of a bride and groom. Here we were at Ben and Miriam’s wedding, in the hills of Judah. There were sounds of joy and merriment. The sounds of the bride and groom. A boy from Portland, Oregon. A girl from Denver, Colorado.

Those of us who love Israel occasionally toy with the idea of living there. But we think of the many obstacles: our friends, our families, our jobs. It’s not possible. But simply and courageously Ben and Miriam demonstrated that it’s very possible.

Only a month after his wedding, Ben has been called up to fight for the Jewish people in the conflict in Gaza. Miriam has also enlisted in a non-combat capacity. I am in Canada thinking about where I should take my family on vacation and Ben, Miriam and the rest of the soldiers in the IDF are fighting for the safety of every Jew around the world. Make no mistake: what the current conflict has demonstrated quite clearly is that Jews around the world are identified with Israel. So no matter where we live, these young men and women in the IDF belong to each and every one of us.

Some people idolize athletes, others look up to entertainers. For me, it’s my cousin Ben. He’s my hero.

Please pray for the safety of Ben and all the Israeli soldiers presently risking their lives.

Not In Kansas Anymore
Is Grease the Word?
Dried Fruit Compote
Scientific Curiosity and the Divine Encounter
Comments
MOST POPULAR IN Israel
Our privacy policy
Aish.com Is Looking for Great Writers