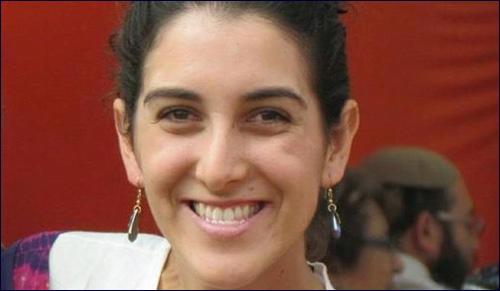 One year ago Dalia Lemkus was murdered. It’s important to remember as many victims as we can.

Following the murder, the bus stop was draped initially with Israeli flags and homemade signs declaring Am Yisrael Chai (the Nation of Israel lives) and Al Tira Mahem Ke Hashem Elokaicha Imach (do not fear them because God, your God is with you). Those signs are no longer there but in their stead stands a very tall menorah, perhaps symbolizing the great light that one Jewish soul had spread during her brief but meaningful life.

There have been so many terrorist attacks since the brutal murder of Dalia that it is difficult to remember each victim. But it is important that we remember as many as we can. Behind each terrorist victim there is an immediate family, relatives and friends who still mourn and who still ache from the gaping hole left in their hearts.

Monday afternoon, November 10th, 2014, Maher al-Hashlamun from Hevron tried to run over people at the bus stop outside of the town of Alon Shvut. He hit Dalia, stepped out of the car and then stabbed her repeatedly in the neck as she lay wounded on the ground. He proceeded to stab Yeshaya, a young man who came to help Dalia. Yishai Katz stopped his car and got out to bravely face the terrorist with his bare hands. He was stabbed in his jaw and later taken to Sharei Tzedek. The terrorist then ran back across the road to make sure that Dalia was dead.

Meanwhile a yeshiva high school girl ran up to the guard station at the entrance to Alon Shvut and alerted the guard, Eshbal Am Shalem a neighbor of ours from Rosh Tzurim. The girl was so traumatized that she couldn’t even talk; she just motioned with her hands. Eshbal ran to the scene of the terrorist attack. The guard shot the terrorist three times in his chest.

Resuscitation efforts by a passerby on Dalia failed. The terrorist was taken to Hadassah Hospital where he underwent surgery and hospitalized in a room next to Yeshaya, one of his stabbing victims.

Dalia was one of six children of Nahum and Brenda Lemkus. Her parents made aliyah 31 years ago from South Africa. For the past 16 years they have been living in the town of Tekoah in Gush Etzion. Nahum is an optometrist and he also volunteers for Magen Dovid Adom. Brenda works with the elderly.

Dalia loved to bake cakes with her mother. She also liked to help brides and would do their makeup for free before their weddings. She had just finished a degree in occupational therapy. She volunteered at Yad Sarah and was looking forward to marriage and raising a family.

Dalia had been wounded in a previous stabbing attack in February of 2006. She was standing at a bus stop at the Gush Etzion junction when she and another man were stabbed by a 28-year-old Hevron resident. An off-duty policeman got out of his vehicle and cocked his gun at the terrorist. The terrorist fled.

At Dalia’s funeral her sister Michal recounted a conversation she had had with Dalia. “After the stabbing attack in 2006, I asked you how you could continue to hitchhike and stand at the intersection where you had been stabbed at, and you nobly strengthened me. ‘You think I’ll let them beat me?’”

“I want to scream to everyone, to my nation, and especially to myself, ‘Don’t stop hitchhiking! Don’t give them the pleasure of successfully stopping us from living our lives, simply do not stop your life,’” said Michal.

Following the murder, soldiers have been stationed at a number of bus stops in our area. The mayor of the local city of Efrat, Lt. Col. Oded Revivi, says that security will only be achieved when incitement is stopped. “The security forces are trying to create a sense of security, but we know that it’s only producing a false sensation… Everyone understands that we have ruthless enemies who want to destroy us. There is no justification for the murder of a young woman or for three teenagers to be kidnapped and murdered at a bus stop.

“Leaders have the responsibility of acting responsibly, and I know that security services do much to soothe the area. On the other hand, Abbas decides if things will escalate or be calm. Now, though, he may understand that we too can be incited, so he is trying to calm the flames. We’ll see whether he can succeed.”

During Nahum’s eulogy for his daughter he said, “The terrorist murdered her because she was Jewish, because she is carrying on the tradition of the Nation of Israel. The terrorist did not understand that through the murder, he will not succeed in breaking us and our bond to the land of Israel.

“With your radiant face, your beauty and kindness of heart, you followed the path of Sarah our Matriarch. You helped us and the entire nation of Israel. You have merited to die al Kiddush Hashem, sanctifying God’s Name. Beloved Dalia, you join our holy matriarchs. May you sit in the shadow of the Divine Presence.”

One long, painful year has passed. Several months ago I watched a news video which showed Brenda and Nahum in the court room in Camp Ofer, north of Jerusalem, which houses the largest Israeli detention prison for Arab terrorists. Dalia’s mother demanded the death penalty for the terrorist, but the court, which never imposes the death penalty on terrorists, settled for two life sentences, and awarded the Lemkus family with NIS 4 million compensation to be paid by Hashlamoun.

On Tuesday, October 20th, 2015 IDF soldiers finally demolished the home of the terrorist who murdered Dalia.

Destroying the terrorist’s home is only a slight consolation for the Lemkus family, whose daughter Dalia did not fulfill her dream of marrying and building a home in the Land of Israel. May her memory be for a blessing.

Click here to sign the petition sponsored by Dalia’s family calling on the White House to act against Palestinian leaders who are inciting violence against Israel. If this petition gets 99,999 signatures by November 28, 2015, the White House will review it and respond.

We Will Remember
The Blue Beyond
Great Place to Live
Is Eating Supposed To Be Spiritual?
Comments
MOST POPULAR IN Israel
Our privacy policy