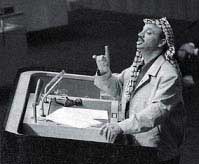 In 1974, the United Nations passed a resolution granting observer status to the PLO. This was the first recognition of the PLO by a major political body, and was seen by many as opening the door to eventual Palestinian statehood. The UN decision came nine days after Yasser Arafat addressed the UN plenary in New York. In the speech, with a gun holster strapped to his hip, Arafat compared himself to George Washington and Abraham Lincoln. By 1980, the PLO has been recognized by European nations, and by Israel in 1994.

This date also marks the death of Golda Meir (1898-1978), former Prime Minister of Israel. Born in Kiev, Russia, she was subjected to brutal pogroms and moved with her family to Milwaukee at age eight. It was 10 years later, while organizing an American protest march against these Russian pogroms, that Meir decided to make aliyah. Meir became involved in politics at age 24 and was among the signers of Israel's Declaration of Independence. Meir became Israel's first Ambassador to the Soviet Union, and served as Prime Minister during the tense time of the 1973 Yom Kippur War. She once said: "Peace will come when the Arabs love their children more than they hate us."

Nisan 17
The Power Of Prayer
Va’etchanan 5782: A for Effort
Can You Show Me This "God?"
Comments
MOST POPULAR IN Day in Jewish History
Our privacy policy
Aish.com Is Looking for Great Writers