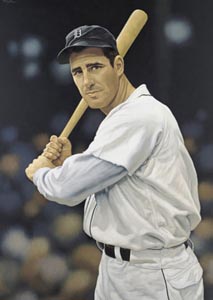 In 1938, Hank Greenberg of the Detroit Tigers narrowly missed breaking Babe Ruth's single-season home-run record of 60 home runs. Greenberg hit his 58th homer with two weeks remaining in the season, but several pitchers then intentionally walked him rather than give a Jewish man a chance to break Babe Ruth's record. (He led the league that year with 119 walks.) Though Greenberg disputes this motive, he did acknowledge being subject to the most vicious ethnic taunting seen in the sport since the days of Jackie Robinson in 1947. Greenberg testified: "During my first year in the big leagues, the remarks from the stands and the opposing bench about my Jewish faith made life for me a living hell." Greenberg grew up in an observant Jewish household, and did not play on Yom Kippur. In 1954, he became the first Jewish player to be elected to baseball's Hall of Fame in Cooperstown.

Adar 21
Near Death Experience Panel
The Western Wall: The Heart of the World
Ask the Right Question: Tisha B’Av
Comments
MOST POPULAR IN Day in Jewish History
Our privacy policy
Aish.com Is Looking for Great Writers