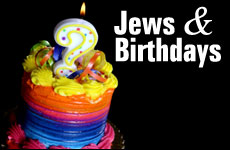 Why I won’t be celebrating my birthday.

Next week is my birthday, but I won’t be celebrating.

It’s because a few years ago I noticed something remarkable in the Torah that made me rethink the whole idea of giving special significance to the day I was born.

There’s only one time in the entire Bible that we read about a birthday party. The guest of honor, who in all probability planned it for himself? Pharaoh, the king of Egypt, whose birthday bash we read about in the book of Genesis.

Aside from this non-Jewish leader, whose lifestyle certainly doesn’t deserve to be emulated by us, there isn’t a single mention of a birthday celebration by any one of our people.

Why the strange neglect of what we would think is a significant day worthy of celebrating and rejoicing? Another occasion that Jews do celebrate yields an answer.

On the anniversary of the day of death of a loved one, the yahrzeit, it is our custom to share food and drink with others. It is then, with the passage of time, that we can reflect upon all that was accomplished by our departed as well as the legacy of their achievements. We have a right – as well as an obligation – to celebrate a life that we can now in retrospect acknowledge as having been well lived.

Related: Your Jewish Name and Birthday

But birthdays link us only to the day of birth. When we are born, we have as yet accomplished nothing. We have no more than potential, alive to face the challenges that will confront us but with no assurance that we will overcome them successfully.

Birthdays don’t really deserve applause because they commemorate nothing more than our first appearance on the stage of life. Voltaire put it well when he wrote, “God gave us the gift of life; it is up to us to give ourselves the gift of living well.” How we play our role is the great test of our character.

The 18th century rabbinic giant, Rabbi Moshe Sofer, known by the name of his major work as the Chatam Sofer, resolved a fascinating question by way of this insight.

The Talmud teaches that truly holy people die on their birthday. The rationale given for this seemingly harsh linkage is in fact to acknowledge a divinely decreed blessing. Righteous people are granted the gift of complete years. Whatever their lifespan, they live it out to the very last day.

It is a beautiful thought but the Chatam Sofer wonders how such a tradition could be maintained in the face of the knowledge that many saintly figures of the past did in fact not die on their birthday. Would that disqualify them from consideration as truly righteous in our eyes?

Every one of us has more than one birthday. The first is of course purely biological. That moment gave joy to our parents, but we really have no right to make any personal claims on its significance. We were born – but it remains for us to prove by the way we subsequently live our lives that that deserves rejoicing.

It is the other “birthdays” we have that deserve recognition.

The day I first learned to read the Alef-Bet, as my father wrote the Hebrew letters on a slate in honey, taught me how to pronounce them, and then allowed me to lick the sweetness of their forms and to absorb God’s script into my soul – that was the day I was born into Jewish consciousness.

The day I received my rabbinic ordination, my Smichah, was the day I was born to begin my life in the service of God and to devote all my energies to the benefit of our people.

The day I married was the day that, in the eyes of Jewish tradition, I became a complete person – until then being unfulfilled without my divinely designated helpmate.

The four days on which I was blessed with the arrival of each one of my children allowed me the joy of knowing that I would be able to pass on the legacy of our ancestors to a new generation I had a role in creating – and nine grandchildren that followed were a beautiful frosting on the cake God was kind enough to bless me with.

So why celebrate my own birthday – a day I had nothing to do with personally – when I have so many other major moments in life that far more deserve to be celebrated?

Click here to purchase Rabbi Blech's new book, The World from a Spiritual Perspective: A Collection of Insightful Essays from Aish.com