If You Could be Superman 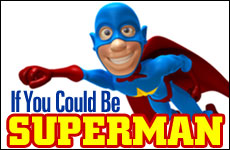 Which superpower would you chose?

The question caught me off guard, which doesn't happen often after 15 years in the classroom. "If you could have any superpower," asked Aliza, the 'reporter' for the school newspaper, "which would you choose?"

The question is more than a variation on the genie-in-the-bottle scenario. Three wishes make narrowing the field of possibilities much easier, and focus on what you want to have, as opposed to who you want to be.

Ironically, it was two Jews who brought the whole genre of superheroes into the collective consciousness of popular culture. In 1933 Jerry Siegel and Joe Shuster, two Jewish teenagers from Cleveland, responded to Hitler's rise to power in Germany by reinventing their comic character, Superman, as a defender of truth, justice, and the American way. The only time they couldn't work on their project was Thursday nights, when their "drawing board" was confiscated by Joe's mother, who used it to knead her Shabbos challah.

Batman, Spiderman, Captain America, and the Green Lantern were all created by Jews as well. For the not-yet assimilated Jew trying to find his place in gentile society, the invincible alter ego of the mild-mannered misfit was the perfect symbol of cultural ambivalence.

The biblical heroes of Judaism were real people who, through extraordinary dedication and self-sacrifice, achieved extraordinary things.

A proper understanding of these narratives requires an appreciation that the personalities in the Bible are not cartoon characters. Moses was infinitely greater than Charlton Heston could ever make him out to be, and the memory of Samson is poorly served by his common portrayal as a World Wrestling Federation caricature. The biblical heroes of Judaism were real people who, through extraordinary dedication and self-sacrifice, achieved extraordinary things.

THE RESPONSIBILITIES OF POWER

Nevertheless, there is a critical point in common between the heroes of Jewish tradition and the heroes of comic book fantasy: all recognized that their talents and abilities obligated them in service beyond individual self-interest. As Cliff Robertson says to Tobey Maguire in Spiderman: "With great power comes great responsibility".

The heroes of the Bible did not seek greatness. Moses tried to argue his way out of the yoke of national leadership. The prophet Jeremiah protested that he was too young and inexperienced to rebuke his fellow Jews. Samson's divine mission was prophesied before his birth. Yet each of them rose to the responsibility imposed upon him by the power with which he was endowed by his Creator.

Consider the structure of the Jew's daily prayer, composed by the sages to include every possible category of request. We ask for knowledge, so that we can know the difference between right and wrong. We ask for forgiveness, repentance, redemption from our problems, health, guidance, and for the arrival of the messianic era. In short, we ask for the Almighty to bestow upon us the resources we need to help bring His plan for creation closer to its fulfillment.

None of which requires superpower.

So what should one ask of his Creator? It is with this request that the devout Jew begins his day: Bring us not into the hands of careless sin or wanton transgression, nor into the hands of trials or disgrace; let us not fall under the dominion of the inclination to do evil, and distance us from wicked men and every wicked companion. We do not ask for super power to defeat our enemies, but for the inner strength and the divine protection to rule over ourselves.

The attraction of superhuman power and the mystique of superheroes springs forth from a romantic adventurism that renders ordinary life unsatisfying by comparison. We find our lives mundane and therefore long for the excitement of fantasy. We discard the value of the everyday and seek to live vicariously through the imagined and the unattainable.

It is noteworthy, therefore, that Biblical Hebrew contains no word for either romance or adventure. These are concepts of the modern world, both of them betraying the modern world's dissatisfaction with reality.

So what superpower would I ask for? I still can't say. And when I asked a group of my students, not one would commit to an answer. Perhaps our reticence comes from our innate appreciation that we are already supermen by virtue of the soul that resides within us. How else to explain the courage that compels human beings to battle daily against ignorance, prejudice, laziness, impatience, dishonesty, and deceit. To conquer those enemies, day after day and year after year, and to return to the fight when they have conquered us -- this is the measure of true heroism.

We don't need super powers to become extraordinary. Striving to fulfill the potential with which we were endowed by our Creator makes us the greatest hero of all.

8 Ways to be More Thankful

The Power of Self-Acceptance

Judaism, Astrology, and Fate
Olivia Newton John’s Grandfather was a Nobel-Prize Winning Jewish Physicist
Don’t Believe in Other Gods Versus God is One
Seeing Without Eyes
Comments
MOST POPULAR IN Spirituality
Our privacy policy
Aish.com Is Looking for Great Writers