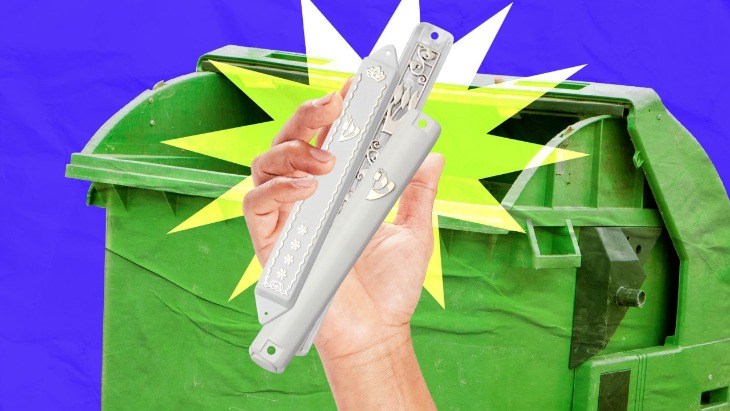 A painter accidentally threw our mezuzahs into the garbage.

Our painter, David C. Milke – from DCM Custom Painting, LLC – has painted many homes belonging to Jews, and he knows not to remove the mezuzahs from the doorposts. He appreciates that these sacred scrolls need to be treated with the utmost respect.

But while painting our home, one of David’s workers mistakenly threw a couple of the mezuzahs into the garbage. Without realizing it, at the end of the day David took the large black garbage bag (with the mezuzahs inside) and disposed of it in a commercial dumpster near where he lives.

Later that day, I was walking around the home and I noticed that a couple of doorframes were missing their mezuzah. My heart skipped a beat. I immediately called David and asked him if he had any idea where they were. He was quite apologetic and explained to me that the mezuzahs must have been in the black garbage bag he threw out earlier in the day. It was an accident, but I felt terrible. I should’ve been more careful. I should’ve watched the painters more closely.

It was an unsettling and uncomfortable feeling knowing that I was sitting in a warm clean home while my precious mezuzahs were in a cold, dark, and nasty dumpster.

But it was already later in the evening, I had no idea where the dumpster was located and David wasn’t answering his phone. Even more, David had told me that since it was a commercial dumpster it was illegal to go dumpster diving.

I went to sleep that night feeling frustrated and hopeless.

The following morning, at 7 AM, I received a phone call from David C. Milke. With enthusiasm and excitement in his voice, he told me, “I got them. I got the mezuzahs!”

My heart skipped a beat once again, but this time out of joy! I couldn’t believe it. He explained that he realized that these scrolls must be very special and holy. So he woke up at 3 AM, brought his ladder to the dumpster, and went dumpster diving in the dark until he found the very black garbage bag that he threw there the day before. Upon emptying the garbage bag, he located the missing mezuzahs.

I was blown away by David’s unwavering commitment and willingness to risk his job (by illegally jumping into a commercial dumpster) and go the extra mile to save those holy mezuzahs that are not even part of his religion.

He could he have come up with a hundred excuses not to retrieve the lost scrolls, but instead he woke up in the dead of the cold night, took an enormous risk and got filthy dirty hunting through garbage, all to do the right thing, an altruistic action – that will never be forgotten.

We are constantly faced with small moral decisions. Should I help this elderly woman with her grocery bags or pretend as if I didn’t see her? Should I snap at my child or take a deep breath and give him the love and attention he seeks. Should I bother getting dressed to go to a neighbor’s bar mitzvah or just blow it off and remain in the comfort of my home?

Each decision we make is another opportunity to grow as a human being and develop our character. And all these decisions add up and define the kind of person we want to be.

Doing the right thing is usually the harder option. I’m sure David didn’t feel like waking up in the middle of night to go mezuzah hunting in the garbage. But he did.

And in my books, that makes him a hero.

Rabbi Ori Strum is a passionate educator, a talented author, and the host of a popular weekly podcast called Torah Sparks. He received his Rabbinic ordination from the Dallas Area Torah Association (NCSY Semicha Program). Rabbi Strum is a Rebbe at a Jewish high-school and a Property Manager in Baltimore, MD. His favorite color is metallic blue.

One Drink Too Many: My Journey to Letting Go of Alcohol, Finding Freedom and Choosing Happiness
The Jewish Trader called “One Tongue” by Native Americans
Who was Two-Gun Cohen?
Why Really Everyone Believes in Free Will
Should Jews Support Ukraine?
The Jews of Cuba
Comments
MOST POPULAR IN Personal Growth
Our privacy policy