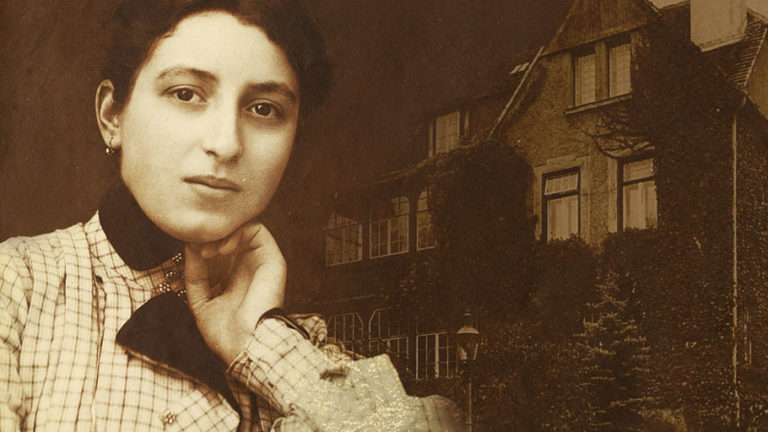 Elsa Koditschek hid under the noses of the SS family who’d stolen her home.

When Elsa Koditschek’s Viennese home was forcibly taken from her by the Nazis in 1940 and handed over to a senior SS officer tasked with rounding up Jews, Elsa went underground in the most unlikely of places: her own house. She spent much of the war under the noses of the very SS family who’d stolen her home.

Elsa’s remarkable story is now being told thanks to the auction house Sotheby’s, which is selling the one valuable painting that Elsa owned and broadcasting her incredible tale to the world.

Elsa Koditschek was married to a prosperous banker and together the Jewish couple built a three-story house in the Viennese suburb of Hietzing in 1911. Elsa’s husband died young, and she continued living in the house, raising her son and daughter as a single mother. Elsa remained in her house and rented out the second floor. Her tenant, Sylvia Kosminski, became a dear friend, and Elsa and her children called her “Aunt Sylvia”. As anti-Semitism increased around them, Elsa took the precautions of sending her children away to safety: her son moved to the United States and her daughter sought refuge in Switzerland.

Elsa wasn’t a major art collector but she did buy one important painting: Dammernde Stadt, by the Viennese expressionist painter Egon Schiele. Little did Elsa know that the painting would one day help save her life. 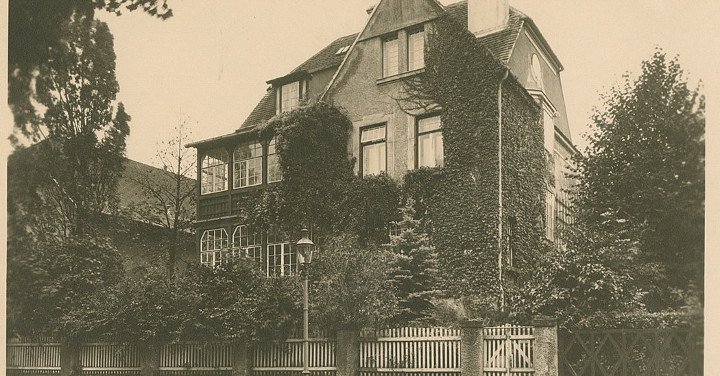 In 1938, Austria was annexed by Germany and strict anti-Jewish decrees began to go into effect. As many of her friends and relatives lost their jobs and couldn’t afford places to live, Elsa took them in, assigning different rooms in her large house to her new guests. Elsa moved into her music room, sleeping on a sofa, and hung Dammernde Stadt into her dining room. In 1939, she wrote to her son that she was now dependent financially on Aunt Sylvia, who was helping her and her many guests get by now that Jews were barred from most forms of employment.

In 1940, the Nazi party seized Elsa’s house, assigning it to local SS officer Herbert Gerbing and his family. Gerbing was charged with rounding up Jews in Greece and France and was noted for his extreme cruelty. Ironically, he allowed Elsa to stay in the house as a tenant living in an upstair’s bedroom for several months. Elsa wrote to her children that any time the Gerbings had a question about their new house, they’d demand that Elsa come to them and explain how things worked.

Their relations were so cordial that when Elsa received an order in 1940 to report to the Lodz Ghetto, she took it to Herr Gerbing and asked if he could do anything to cancel her order. The Lodz Ghetto was an overcrowded hellhole in which nearly 70,000 Jews were detained in inhuman conditions: starved, beaten, and eventually deported to Auschwitz and other extermination camps. Herr Gerbing knew all about the evil going on there, but he lied to Elsa, telling her he wouldn’t change her order and that she should expect life in Lodz to be pleasant. He also advised Elsa not to take too much luggage, knowing that she faced certain death and that anything she left behind would become his. 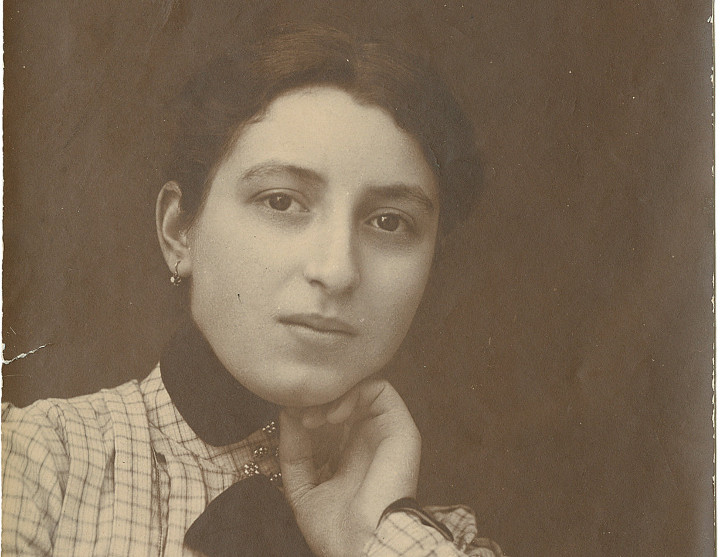 Elsa wasn’t reassured about Gerbing’s rosy portrait of life in Poland. She hatched a plan with Sylvia: Elsa would go and hide with a Christian couple she knew. If anyone tipped off the Nazis to her whereabouts, Elsa would flee. A network of friends would inform Sylvia, and she and Elsa would meet at a pre-arranged location to plot Elsa’s next step.

Elsa spent a year and a half hiding with a non-Jewish couple named Heinz. When the Heinzs were away, Elsa kept the lights off. For 20 months she stayed away from windows and only left their apartments a couple of times, always at night. She spent hours hiding in a crevice between a cupboard and a storage box. One night in 1942, Elsa heard Mr. Heinz come home early, accompanied by two Nazi guards who started searching the house. Elsa ran out of the apartment, wearing only a shabby housecoat and slippers, and hid outside for hours. Eventually, she made her way across Vienna to the rendezvous point she’d arranged with Sylvia, hoping that Sylvia would have heard what had happened.

Sylvia had not. She’d been out at a party and had no idea that Elsa was waiting for her in their secret location. When she did hear about the raid – Mr. Heinz had been arrested for selling jewelry on the black market and informants had told Nazi officials the couple was hiding a Jew – Sylvia assumed Elsa was dead. Surely there was no way Elsa could have eluded capture.

As the hours ticked by and Sylvia failed to appear, Elsa reached out to another non-Jewish couple she knew and asked them to relay the message to Sylvia that she was alive. Sylvia agreed to meet Elsa later that night several miles away, and Elsa travelled by foot to their meeting point, terrified that at any moment she would be spotted and arrested.

When she finally met Sylvia, the two returned to the only place they could think of: Elsa’s own home, now owned by the Gerbing family.

Sylvia sold off the last of Elsa’s possessions, including the painting Dammernde Stadt.

Sylvia installed Elsa in her own apartment in the house, and Elsa spent the rest of the war doing all of Sylvia’s washing up and mending. It’s ambiguous from Elsa’s letters just what sort of relationship she and Sylvia had, although it was clear that Sylvia now had the upper hand over her former landlady. Sylvia sold off the last of Elsa’s possessions, including the painting Dammernde Stadt, and pocketed the proceeds from the sale.

From her upstairs window, Elsa often watched the Gerbing family relax in the garden. Frequently, she observed crates of treasure arrive at the house containing plundered items that Gerbing had sent home from his trips abroad. She also watched a steady stream of Jewish slaves arrive at the house to perform maintenance, make repairs, unload deliveries and work in the garden.

By late 1944, Allied forces were getting closer to Vienna and were heavily bombing the city. The electricity and gas supplies to the house were often cut. Frau Gerbing received news that her husband had been murdered in Prague. On April 9, 1944, Easter Sunday, Frau Gerbing and her children fled the house, but Elsa was still too terrified to emerge from her hiding place.

The house was vandalized by Soviet forces who liberated the area and stole everything of value, even Elsa’s wrist watch and supply of candles. Elsa remained in the ruined house with Sylvia before eventually making her way to Switzerland where her daughter lived. Elsa died in 1961, her letters largely forgotten and unread even within her own family.

All that changed recently, when the current owners of Dammernde Stadt contacted Sotheby’s about selling the painting. Sotheby’s isn’t divulging any details about the owners, other than they are private European collectors. Aware of the painting’s complicated status, Sotheby’s worked with Elsa Koditschek’s descendants to trace the work’s provenance. Both Elsa’s family and the painting’s most recent owners will benefit from its sale.

Elsa’s letters were hidden for years in a relative’s basement and now they are being read and analyzed for the first time in decades.

For Elsa’s grandchildren and great grandchildren, learning about Elsa’s wartime experiences has been the real treasure. Her letters were hidden for years in a relative’s basement, and now they are being read and analyzed for the first time in decades.

Lucian Simmons, Sotheby’s head of restitution, explains the value of Elsa’s story: “It’s so unusual to have a victim of Nazi theft or expropriation who writes everything down. Usually you’re trying to join the dots, but the dots are far apart.”

Elsa’s grandson Ted Koditschek, a retired history professor at the University of Missouri, explains that for him and his relatives his grandmother’s letters are more personal. They’re “like a Rosetta Stone” for his family, helping them understand, at long last, their grandmother and the remarkable story of her survival under the very nose of the brutal SS guard who thought he’d turned her out of her home.

To Remain a Jew: The Untold Story of Luciano Camerino

12-Year-Old Jewish Hero of WWII
Should I Break Up, Get Engaged or Keep Dating?
Time Is Your Precious Commodity
A Constant World in Flux
Comments
MOST POPULAR IN Israel
Our privacy policy