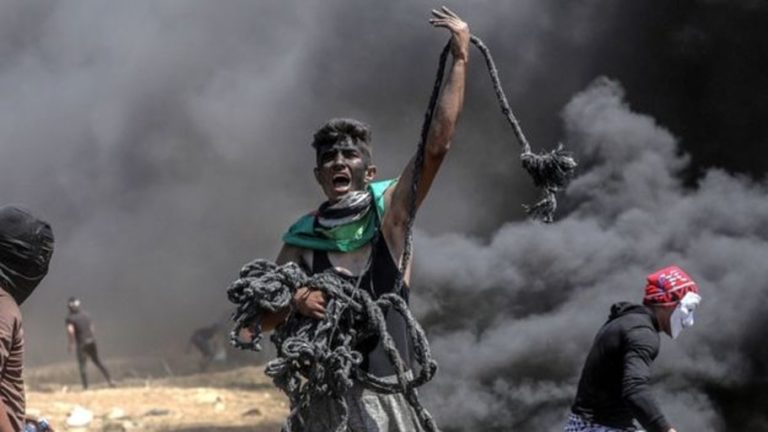 I’m just back from a speaking tour in Europe, where I was confronted with the challenge of justifying Israel’s actions on the Gaza border and even the country’s very legitimacy as a nation among nations.

The deep “psychological asymmetry” (as Dr. Irwin Mansdorf calls it) employed by Hamas and Fatah as a strategic weapon against Israel – is working. The Palestinians exploit civilians in order to meet strategic goals, by placing them in danger or condemning them to unending refugee life.

The ensuing misery gnaws away at the conscience of well-meaning and naïve observers around the world, and they find it hard to justify the “imbalance” in suffering between the Palestinians and Israel. The soft bigotry of low expectations (by Europeans of the Palestinians) excuses PA President Mahmoud Abbas and Izzadin Kassam Brigades leader Yahya Sinwar of any responsibility for their people’s predicament.

Then there is the radical progressivism that has captured much of mainstream political discourse in the West. This makes liberal people uncomfortable with the use of force by nation-states in almost all cases.

Israel’s “over-dog” position and its frequent recourse to military action to defend itself is then magnified and manipulated by malign and much less naïve actors to skewer the Jewish state.

On this particular trip I also encountered a growing proclivity to take refuge in a false, manufactured dichotomy between “good old Judaism” and “bad new Zionism.”

The ancient Jewish faith is something to be admired and commemorated, you see.

Jewish heritage is hip and Jewish history is interesting – all across Europe. (Perhaps this is the European way of awkwardly atoning for centuries of persecution of Jews).

But modern-day Jewish nationalism as expressed in the powerful State of Israel is a sin. Israel is a sinful country committing criminal acts against its neighbors and even against Judaism itself – I was told.

Only Palestinian statehood can redeem Israel’s rotten record, it would seem – even though there is no basis to believe that such a state will be anything other than one more failed, fractured and violent Arab country – perhaps radically Islamist – at war with Israel and its other neighbors.

Without admitting it, people speaking this way are deeply anti-Semitic in effect. The Jew they (claim to) like and (very belatedly) admire is a weak, cerebral Jew; a Diaspora Jew whose Talmudic literature is all-of-a-sudden filled with wisdom, and whose art and poetry is unexpectedly so very 21st century cultural.

But then there is the Jew they love to hate; the mighty and brawny Zionist Jew that wields the most formidable army in the Middle East and whose economy to just too damn overwhelming. That Jew is just too robust and zealous. Too vicious and potent.

That Jew needs to be cut down to size.

Beyond all the usual pro-Israel talking points and debate tactics with which I am well familiar, I found on this trip that there were five key strategies that had some impact on my interlocutors.

First, don’t play the victimhood game. People out there don’t care, alas, how many acres of fine Israeli agriculture have been burned by Palestinian incendiary kites, or how many Israeli women and children have been murdered by Hamas suicide bombers, or how many missiles Iran is giving Hezbollah to fire into Israel.

The recounting of Arab atrocities, no matter how egregious, doesn’t wash. European liberals simply don’t see Israel as the underdog.

Second, history matters. The Six Day War was not an act of Israeli aggression, but a defensive war, and the Arab side lost fair and square. There never was a Palestinian state. Settlements are not colonialist outposts but express a Jewish “right of return” to ancestral lands. Israel placed three full-scale peace proposals on the table over the past 15 years involving Palestinian independence and almost-complete West Bank dominion – yet Abbas rejected all offers and preferred to fight on.

Few care much about this history, but it needs to be restated because it isn’t known and it goes to the core of Israel’s case.

Third, you have to emphasize, over and over again, that Israel seeks conflict resolution, not jihad; that Israel wants to resolve conflicts through compromise, not end conflicts by annihilation of the enemy. Say that Israel wishes to live at peace and cooperate with its neighbors, not to conquer Arabic and Islamic nations from Tunisia to Indonesia.

No matter how ridiculously self-evident this seems, the repetition of this truth is extraordinarily important. It isn’t obvious to many Europeans.

Fourth, it is simply not enough to explain Israel’s security dilemmas or revisit Israel’s diplomatic generosity toward the Palestinians.

What’s needed is a much more basic restatement of Israel’s cause and purpose: Israel as a grand historic reunion of people and land, and as a just and moral actor in the medieval and violent Arab Middle East. Israel wins when you speak about justice and the Jewish nation.

Fifth, and most important of all, don’t be embarrassed by Israel’s strength. Admit to it.

As counterintuitive as this may seem, especially in contrast to the “outstretched hand for peace” narrative described in a previous paragraph, never apologize for using “disproportionate” force. Instead, articulate the reasons why and the circumstances under which Israel must use force to defend its homeland, and don’t be shy about it.

Largely, this means sharing Israel’s dilemmas with your audience. It’s okay to agonize a bit over the need to be a ferocious military power. Dwelling on this is truly Israeli and it is humanizing. But never ask for forgiveness or suggest that Israel will pull its punches just to win a nice guy award.

I have found that forthright, unashamed talk has salutary impact. Without being nasty or unfeeling regarding our adversaries, one can convey a deep sense of sincerity and believability by verbalizing Israeli redlines and enunciating core Zionist commitments.

People are forced to respect that, even if they won’t impute to you awe-inspiring humanity.

Grudgingly, even Europeans come to see that you have a point; a perspective that might be tough and gruff, but that also might be reasonable under the circumstances.

Differentiating between Demonizing and Critiquing Israel
Olivia Newton John’s Grandfather was a Nobel-Prize Winning Jewish Physicist
Don’t Believe in Other Gods Versus God is One
Seeing Without Eyes
Comments
MOST POPULAR IN Israel
Our privacy policy
Aish.com Is Looking for Great Writers