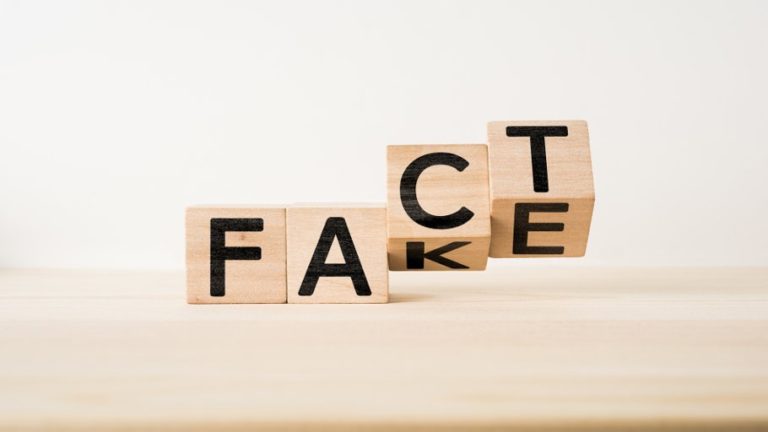 The headlines and social media posts sound terrible. A tiny helpless five year old from Gaza supposedly died friendless and alone, crying out for some pity, for company, for anyone to be with her as she lay moments from death in a Jerusalem hospital bed, ignored by heartless Israelis who cruelly prevented her parents from being with her in her final hours.

“Aisha Lulu is a 5 year-old beautiful princess from Gaza and she was taking chemical medication for her cancer in Jerusalem. Israel prevent everyone from her family to accompany her…” one human rights organization posted on their Facebook page on May 17, 2019, below a picture of a tragic looking girl swaddled in bandages in a hospital bed.

Palestinian news outlets supplied the outlines of this seemingly horrible story, albeit with key details varying from source to source. Gaza-based, Hamas-linked Al Quds News Network was the first to write about Aisha’s story, claiming inaccurately that she died in a hospital in “occupied Jerusalem” in great distress: “crying, unable to speak and alone (because) Israel refused to grant permission for any of Aisha’s family members to accompany her”.

Official Palestinian Authority news outlet WAFA reported the story differently, though no less heart-rending. According to the site, Palestinian Authority Health Minister Mai Alkaila asked “how can a little child travel alone through Israeli checkpoints without being escorted by her mother, father or brother to provide her with affection and psychological support during treatment? Aisha had to fight her disease alone, in a blatant disregard to international agreements, covenants and treaties on human rights…” 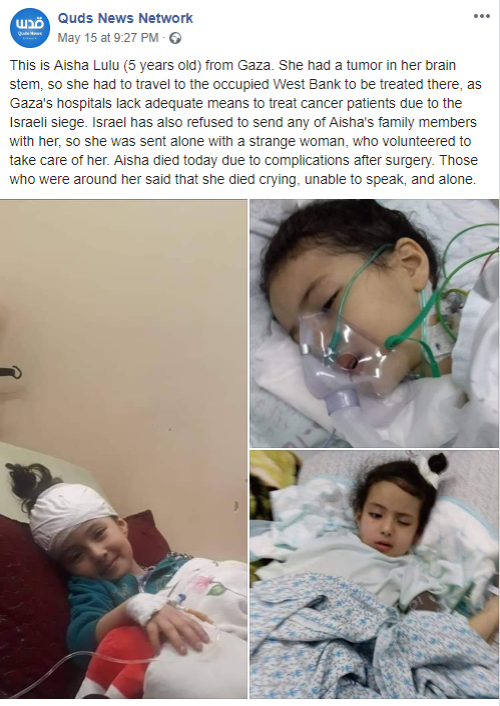 Israeli MK Ahmad Tibi added his own gruesome twist to the story, posting “After postponements and delays, she was rushed late for an operation in East Jerusalem. Alone. Her family was not allowed to accompany her, neither her mother nor her father….”

Except these terrible details are lurid inventions. Aisha Lulu was indeed a cancer patient from Gaza. She did travel to Israel for medical treatment, and sadly she did pass away in early May 2019. But there the similarities between her real life experiences and the lurid details about her that are being circulated on the internet ends.

Suffering from a rare form of brain cancer, Aisha and her family were granted permission to travel to Israel for treatment. As is required in such cases, Israeli authorities mandated that family members travel with Aisha. “We emphasize that CLA (Coordination and Liaison Administration) Gaza policy requires parents to escort their minor children for medical treatments, based on the understanding that children need their parents in moments such as these” Israel’s Coordinator of Government Activities in the Territories (COGAT) explained.

Aisha’s parents declined to go, signing declarations that they would not accompany their daughter and designating a family friend to accompany the little girl instead. “However in this case, Aisha’s parents did not wish to accompany her and therefore, in accordance with the DCL policy, they were requested to sign a declaration that they choose not to escort their daughter during the course of her treatment, due to their own choice, and request that another party on their behalf escort her” COGAT clarified.

Aisha received cancer surgery in Massaked Hospital in the eastern part of Jerusalem; unfortunately the operation was not a success. She and her caregiver returned to Gaza where Aisha died in early May 2019.

As these details came to light, some of the organizations and individuals who’d spread harrowing posts accusing Israel of preventing Aisha’s parents from accompanying her quietly took them down - while others doubled down on the lies about her fate

Jewish Voice for Peace is one group that has stood by the story, even after Israeli authorities released details about Aisha’s fate. On May 19, the group repeated the by now clearly disproven claims that Aisha “died alone in a hospital in the West Bank after...Israeli authorities prevented any of her family to accompany her. Those who were around her said she died crying, unable to speak, and alone.” Despite getting the date and location of Aisha’s death wrong, as well as misrepresenting key details about her parents, the group insisted on Facebook the story was true. Thousands liked, commented on and shared the post. “The victims of haulocust (sic) become themselves haulocust (sic) authors” one typical post claimed.

The story, with all its obvious inaccuracies and conflicting accounts, continues to reverberate on social media and will do so for years to come, poisoning the internet and providing false information for anyone reading about Israel online. At least one print newspaper has picked up the discredited story.

What’s to explain the insistence of some activists, journalists and politicians to repeat an obviously false story such as this one? One answer is that often we choose what to believe based on our pre-existing biases and beliefs. If a story sounds true, that’s often enough for it to be embraced, even by outlets that claim to value truth and the pursuit of knowledge. In one large-scale study, MIT researchers found that people share false and fabricated social media stories much more than real information. We prefer sharing stories that seem to confirm what we already think we know.

The prurient stories that have been made up about Aisha Lulu’s death feeds into widespread narratives of Israel and Israelis as unbelievably cruel - beliefs that tap into ancient Jewish stereotypes of Jews as uniquely evil and barbaric. These anti-Semitic lies foster hatred against Israelis and Jews.

Jonathan Swift once observed, “Falsehood flies, and the Truth comes limping after it.” In these days when lies can be spread throughout the internet with a simple post, that’s never been more true. We all have a duty to stand up and point out when false information is posted online and elsewhere the false, sensationalist reports about Aisha Lulu’s death demand our action.

Don't Equate Israel’s Targeted Self-Defense with Hamas’s Aggression
Don’t Believe in Other Gods Versus God is One
Seeing Without Eyes
Why Shouldn’t We Eat Whatever We Want?
Comments
MOST POPULAR IN Israel
Our privacy policy
Aish.com Is Looking for Great Writers