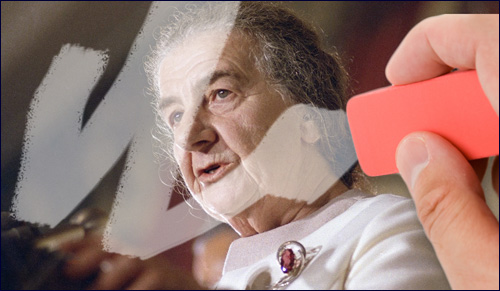 Standing up to anti-Israel sentiment on campus and around the globe makes a real difference.

The head of Kent State’s Students for Justice in Palestine was urging the erasure of Golda Meir's quote that adorns a wall on campus, along with other inspirational sayings.

Here's the offending quote: “Trust yourself. Create the kind of self that you will be happy to live with all your life. Make the most of yourself by fanning the tiny, inner sparks of possibility into flames of achievement.” – Golda Meir

The SJP student leader incorrectly alleged that Golda Meir was racist against Africans, that she instituted “ethnic cleansing” and that she created harmful “racist stereotypes” that today oppress students at Kent State and “contributes to a climate that makes us feel like we do not belong here”. According to the twisted logic of today’s anti-Israel activists, her quote should be erased.

University President Beverly Warren thanked the students for their concerns in a letter, promising to consider their request.

But on November 10, sanity prevailed. Kent State issued a statement that it would not remove Golda Meir’s quote; doing so “would be counter our core institutional value of supporting a diversity of cultures, beliefs, identities, and thought”. While the quote, along with others, is scheduled to be painted over in 2017, for the time being it remains, a testament to the power of speaking up in the face of attempts to slander and even literally erase mentions of the Jewish state.

Here are some other examples of attempts to erase Israel that have been overturned in recent weeks, thanks to willingness of Israel’s supporters to stand up and make their voices heard.

When National Public Radio (NPR)’s health and culture blog asked travelers to share their fears about visiting the Middle East in 2016, the accompanying map of the Middle East contained an interesting feature: Israel didn’t exist. The Jewish state, in addition to the West Bank and Gaza, was labelled “Palestine”.

Jewish NPR fans didn’t take the map’s erasure of Israel lying down. HonestReporting.com was among the first to notice the omission. Simon Plosker, its manager editor, pointed out, “It is completely unacceptable for NPR to publish an image that erases Israel from the map….” Soon, more troubled fans wrote in. Within days, NPR removed the map from its website and included an apology.

Passengers waiting for Air Serbia’s JUO 816 from Belgrade to Tel Aviv on August 29, 2016, got a shock when they heard “passengers for flight 816 with service to Palestine please come to gate C3.” Upset passengers spoke to the flight staff, explaining that Tel Aviv is in Israel. According to their accounts, the scene became confrontational with airline representatives repeating, “The flight is to Tel Aviv, not Israel” and announcing that the flight was headed to Palestine several times.

“I couldn’t hold back when I heard it,” one passenger explained. He approached the desk, and was joined by an Israeli man from Rosh Pina. “I asked them to announce that the flight was going to Israel and not to Palestine,” the passenger recalled. When the manager demurred, frustrated passengers asserted they wouldn’t board the flight if it was not announced as a flight to Israel or to Tel Aviv rather than Palestine and demanded that the announcement be repeated three times for everyone to hear. Finally, flight officials announced that the plane was going to Tel Aviv.

After the flight, Israel’s ambassador to Serbia, Alona Fisher-Kamm, pursued the matter with the CEO of Air Serbia, who expressed shock and remorse and assured passengers the incident wouldn’t be repeated.

Two months later, it seems that another airline erased the word Israel from a flight to the Jewish state. According to the website Middle East Monitor, Chinese Hainan Airlines surprised passengers flying from Beijing to Tel Aviv October 25, 2016 by omitting the name of their destination in the in-flight multimedia system. An in-flight map of Israel was mislabeled “Palestinian Territories” instead. After passengers complained, Hainan Airlines responded: “We thank you for contacting us and turning our attention to this regrettable technical mistake… The airline is working to fix the maps as soon as possible…”

Objecting to Slandering Israel in London

In some cases, mentioning Israel in derogatory ways can be just as bad as erasing its name completely. That was the message that visitors to the Geffrye Museum in Dalston, in London, conveyed in October 2016. Museum-goers who attended an exhibit on teenage bedrooms were shocked to see virulently anti-Israel posters adorning the walls of what were meant to be “typical” teenage bedrooms. Slogans included “Criminal Israel”.

After receiving a number of complaints, museum staff took down the offensive posters. “Having received feedback from a recent visitor,” a museum spokesperson explained, “we have now taken down the image.”

We need to be vigilant, speak up and demand action. In August 2016, the famous French filmmaker Claude Lanzmann (whose film “Shoah” chronicles the Holocaust) went public with an op-ed in two European newspapers with his experiences in a top Berlin hotel, the luxurious Hotel Bristol. Seeking Israel’s international dialing code from the hotel’s directory, Mr. Lanzmann realized Israel’s code had been removed.

The hotel later defended itself, saying, “There is no instruction on the part of the hotel management...to take the Israeli dialing code out of the telephone directory” and pointing out that not every nation’s dialing code was included.

Mr. Lanzmann, however, offers a different perspective. After noticing that Israel’s code had been removed, he asked hotel staff about the omission. According to Mr. Lanzmann, staff told him that Arab clients had asked the hotel to omit Israel’s dialing code from the list. “One cannot fight against Arab terrorism and at the same time allow Israel to be eradicated at one of the noblest and most important hotels in Berlin,” Mr. Lanzmann cautioned.

The McGill Daily, the student newspaper of the prestigious Montreal university, recently issued a startling proclamation: “The Daily maintains an editorial line of not publishing pieces which promote a Zionist worldview,” its editors explained.

This pronouncement came after the paper received a complaint of anti-Semitism. According to the editors, the newspaper reviewed the complaint and found it baseless, explaining that it did not consider anti-Zionist articles to constitute anti-Semitism. The McGill Daily acknowledged that it has no Jewish students on its board, though it asserted that “the broader Daily community contains Jewish voices”.

The paper dismissed Zionism as “oppressive” and illegitimate, completely outside the bounds of civilized discourse, slanderously mischaracterizing the right of the Jewish people to sovereignty like other nations as “a settler-colonial ideology”.

In a climate in which Israel and markers of Israeli identity are often at risk of literally being erased, it’s crucial to stand up and speak out at attempts to slander and demonize the Jewish state. When we insist that Israel be treated fairly, we make it harder for people to delegitimize Zionism or to promote a warped view of a world without Israel.

In the words of Golda Meir, still proudly painted on a wall at Kent State University: “Create the kind of self that you will be happy to live with all your life.” Don’t be afraid to stand up for what you believe in.

Beginning the Journey to Mount Sinai
Seeing Without Eyes
Why Shouldn’t We Eat Whatever We Want?
The Power Of Prayer
Comments
MOST POPULAR IN Israel
Our privacy policy
Aish.com Is Looking for Great Writers