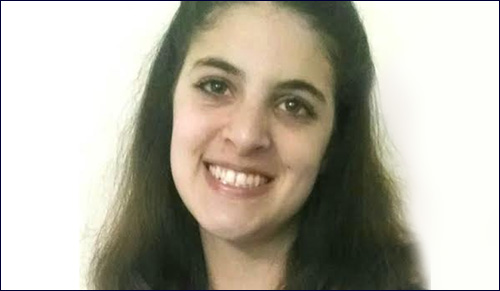 Despite her many challenges, she persevered and she endured.

Last night my wife, my daughter and I went to the home of Devorah Stubin to attempt to comfort her parents and three brothers.

As is often the case, I left with more than I came in with.

I never knew Devorah Stubin; why would I?

More than three decades separated us; we had no common friends, nor would anyone expect we would.

Her parents are not members of my Shul and with the exception of an occasional Mincha or Maariv and perhaps a short chat with her father here and there, we travelled in totally different circles.

One would never expect that the paths of a 22-year-old woman whose family is not a part of this rabbi’s Shul would cross.

Most probably if not for the events of last week, our lives would have never intersected.

Indeed, if life was predictable, I would never have known that a person named Devorah Stubin existed.

Life though, is not predictable.

And as I write these words, the entire Passaic, NJ community and beyond has heard of Devorah Stubin.

Indeed, all over the Jewish world the name of Devorah Stubin is known.

How is it that a young woman whose own father admitted to me last night that she had few friends and who was not by anybody’s standards a loud or boisterous human being, became the center of attention for tens of thousands of people?

Why was a young woman who seemed to live her life being content in residing in the shadows and quiet areas of this world was privileged to have the largest funeral I can ever recall in my  almost three decades of living in Passaic?

What is the reason that a woman who struggled so much of her life with social, physical and emotional challenges which impeded her social acceptance was so totally embraced by the entire Jewish community in a way which we have not seen before here in Passaic?

Perhaps, (and of course I stress, perhaps) the reason is precisely because she struggled.

Her father, simply and in a heartfelt way drew me a picture of the special person his daughter was.

Life was not easy for Devorah; she suffered from epilepsy, chronic fatigue and many more physical and emotional challenges. However, Devorah never gave up!

In her calm, unassuming way she persevered and persisted.

She went to college, she received her driver’s license and this Monday she was looking forward to starting a new job.

Devorah’s father related to me how even though she was forced to walk with leg braces, she was thankful that she was able to walk irrespective of the fact that others may have chosen cosmetic looks over the ability to walk.

In short, Devorah was everyone’s hero.

She was the person who was not born with a silver spoon in her hand; far from it.

She was like us except with far greater challenges than most of us.

As her father related to me she once commented, “Why do I have to have so much pain?”

Yet, even with all of her pain, she persevered and she endured.

In her brief stay in this world she taught all of us that with a determined outlook and with proper dedication, obstacles and can be overcome and success can be had.

I will never understand the true ways of God and how and why He pulls the strings; however, that being said, none of this would have been known if not for the tragic event which cut short her precious life.

No one except her closest family members and friends would have ever been privy to the remarkable and courageous life of this young woman.

Why God chose to make this lesson known in the way He did I cannot answer; however, once He has opened the secret of Devorah and her greatness, do we dare ignore the lesson?

Think about Devorah and about the hard and painful life she lived the next time you are ready to throw your hands in the air and give up.

Think about Devorah and her struggle to walk while wearing leg braces the next time you are upset because your outfit does not match just right.

And think about Devorah when you feel you just can’t go on.

Think about the 22-year-old woman who continued struggling and living in spite of the pain.

Think about her struggles and how she succeeded.

And then, perhaps, just perhaps, her life and tragic death will become just a little more comprehendible.

And then the world will be a slightly better place because Devorah Stubin was here.

The New Anti-Semitism
The Promise Of The Land
Which Chat Are You On?: Parshas Behar/Lag Ba’Omer
Do You Like Slow-Cooked Food? Thank the Jews
Comments
MOST POPULAR IN Jewish Society
Our privacy policy