Dating Maze #319: Over the Shoulder 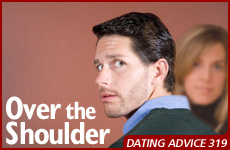 Maybe there’s someone better out there.

I’m a 30-year-old man and have been dating for the purpose of marriage for a few years. I recently met a really terrific woman and it seems there is great potential. We both have similar values and enjoy spending time together.

The problem is that I'm struggling to identify what distinguishes her as The One. Is it merely enough that she is interested in me, and that there is nothing objectionable driving me away? How much positive assurance do I need in making a lifelong commitment?

Besides this, a few other possibilities have now arisen – one woman in particular who I've had a crush on for a long time, even though we've never dated. We were recently assigned to work closely together, and I can't help thinking this is the perfect opportunity for me to try and connect. On the other hand, this may just be a case of “the grass is always greener on the other side.”

I would like to understand what sets apart the woman I'm currently dating, from other potential matches. What do you suggest?

Thanks for writing about a challenge that many daters are grappling with. You enjoy going out with this woman and think she has potential, but it's too early to know if she is truly right for you. Since it takes time to develop an emotional connection, you're starting to wonder if perhaps someone better is out there. In your case, that “better person” might be approachable because you're working together.

We call this the "looking over your shoulder syndrome." A lot of daters have it, and they don't realize how harmful it is. To explain, think of this scenario:

You're sitting with a date in a nice café, trying to have a conversation. However, every 30 seconds, your date turns her head and looks over her shoulder to see if anyone interesting has come into the café. Is she paying more attention to your conversation, or to what's in back of her? Are you two able to have a meaningful discussion? Of course not!

A man went to a singles event, in a club with mirrored walls. He approached an attractive woman and started a conversation. The usual pleasantries were exchanged. Stealing a glance, he noticed yet another attractive woman. Wanting to "trade-up," he mentally juggled a number of diplomatic exit lines.

The problem is that we live in an "instant” society.

We understand why you're entertaining the idea of looking into other prospects, even though you enjoy dating this current woman. It's because our culture has conditioned people to expect to feel intense emotions from the get-go. The majority of courtships that lead to marriage develop at a gradual pace. However, since we live in an "instant” society and aren't accustomed to giving things time to develop, it's not uncommon for someone in this early stage to wonder, "Shouldn't I have stronger feelings about her by now? Where are the fireworks? Maybe this means she isn't the one for me. Maybe I should hedge my bets by looking into someone else who is available."

The problem: This sabotages the courtship in the same way that someone looking over her shoulder in the middle of a conversation is not giving things the chance they need to succeed.

The solution is simple: Focus on the courtship you're in and don’t think about other possibilities. Your goal isn't to feel an instant rush (which in reality, will likely ebb away over time), but to find the right woman to marry and to build a lifetime together. In order to do that, you need to focus your best emotional energy. That means becoming exclusive, even at a relatively early stage.

One of the most crucial aspects of any relationship is what we call “emotional intimacy” – a feeling of friendship, closeness, trust, companionship, and wanting to give. Even people who are immediately attracted to each other do not have emotional intimacy – it has to build gradually, and develops on both a conscious and an unconscious level. If you're slowly building a connection with one woman, a second woman becomes more than a mere distraction. She'll probably keep you from being able to deepen the level of emotional intimacy with the first woman, so you'll never be able to discover the hidden potential of that first courtship.

The emotional energy is dissipated in another direction.

Even worse, what is likely to happen is that you'll lose both women, since you can't devote enough emotional energy to either of them. We have observed this time and again. (The same idea, by the way, is one key reason why adultery is so destructive – the emotional energy that could be put into building the marital relationship in instead dissipated in another direction.)

So while we suggest that you focus exclusively on the present relationship, you needn’t feel pressure into knowing if she's the One. You can't possibly know this so early in the courtship.

However, as long as you recognize that you have compatible values and goals, enjoy going out with her, and feel that you are making progress, keep going! Try to plan dates that have an element of fun, and at the same time give each date a purpose – that will likely expose some new area you'd like to learn about each other. Vary what you do on a date, and make sure that some of them allow for real interaction, rather than just being entertained at a movie or concert. This type of dating allows you to see many different aspects and, will help deepen your connection.

And now for the billion-dollar question: When will you know if the woman you're dating is right for you? We use the acronym PAIR to help remember what to look for. In addition to having compatible goals and values, you should have:

If these elements are present, then you have the ingredients for a great marriage.

Dating Advice #87 - Cold Feet
In the Shadow of David and Goliath
Where Do the Laws of Nature Come From?
Saadiah Gaon, Rashi and Maimonides: How Three Rabbis Revolutionized Judaism
Comments