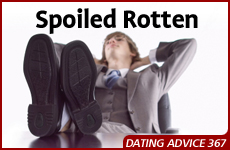 The man I’m dating lives like a 30-year-old adolescent.

After many years of being single and alone, with the occasional bad date and no serious prospects, I had almost given up on ever meeting someone. Then I finally did, quite out of the blue! We are both in our thirties and we’re both deaf, which is very important as we share the same language (sign language) and makes communication possible. We are so happy when we're together and he makes me laugh and smile so much. However there is one big problem...

He constantly takes me for granted and expects me to be responsible for everything. I am a full time student and also work. He lives at his parents' place and spends most of his time sleeping and playing computer games. I am working hard toward making a future for us, educating myself, saving, planning. He has told me that he is lazy so I will have to do all the housework and also all of the childcare, plus work to pay the bills when we are married.

He's willing to get engaged if I pay for my own ring.

To me, this is unacceptable. He says that being an adult means that he can do anything he wants because he doesn't have to listen to his mother anymore. If I nag him he eventually does things, but then jokes and complains to his friends about me nagging because he thinks that's what men are supposed to do. If I step back and say nothing, he simply leaves everything to me. He expects me to pay for him on dates (because I earn money, he doesn't) and has told me he's happy to get engaged whenever I can afford to pay for my own engagement ring.

I feel like he expects me to be his second mother! When we're apart, I get so angry and hurt by all the ridiculous and unreasonable things he expects. But when we're together I'm happier than I've ever been with anyone. It probably doesn't seem like it from this letter, but we do share all the same values – except for work ethic and division of labor in a relationship!

I really want this to work out, but I need him to stop acting like a spoiled child and start to pull his weight – get out of bed in the morning, find a job, and live life!

How can I encourage him to grow up without hurting his feelings? I can't take it any longer! I feel like he assumes I will just accept any behavior from him for fear of losing him, but I'm almost at the point of walking away from a man I love and respect (in other areas) because he doesn't appreciate me and assumes I will continue to take on the superwoman role so that he doesn't ever have to lift a finger.

People in their thirties shouldn’t be having the problem you describe. Unfortunately, we think that the man you’re dating will continue to act like a spoiled child until perhaps some day he has an epiphany and decides to grow up. The problem is that at the rate things are going, this will never happen.

By letting him live in their home and have absolutely no responsibilities, his parents have enabled his infantile lifestyle. They pay his bills, provide him with food, clothing, and entertainment equipment, and don’t expect him to do anything. If they ever did, they seem to have given up on their son at this point. He seems entrenched in his lazy, immature, spoiled lifestyle, and has made it clear to you that he envisions continuing it, at your expense, forever. And it seems that he is surrounded by friends who support his lack of drive and ambition – a welcoming audience when he complains about you to them.

If you stay with him and acquiesce because you are afraid he'll embarrass you in public, you’re letting him manipulate you – and thus you, too, are enabling his selfishness. If you stay with him and nag him all the time, you add fuel to your resentment and cause him to resent you as well. Neither of you will respect the other, and you'll be missing this very important cornerstone of a healthy relationship.

Your children will suffer severely from a mother who is drained from carrying the entire burden.

We understand that you are lonely, and that this man has a certain amount of charm and ability to enjoy life that makes you feel good about yourself. But you are missing a crucial element that a relationship needs to endure in a healthy way – a shared vision for the present and for the future. You envision a marriage where both of you are working together to support and raise a family, and he sees himself having fun, detached from all responsibility, having you take care of everything. You'll feel like a doormat and your children will suffer severely from a mother who is drained from carrying the entire burden of the home and family, and a father who is so selfish he will do nothing for them at all, cares little about their needs, etc.

In a healthy relationship, both partners want to give of themselves and know they are compromising for the sake of the relationship. The man you’re dating doesn’t seem to want to give of himself, or to compromise. What kind of a future would you have together? Moreover, it doesn’t seem to us that he's really interested in getting married to you. A man who wants to marry a woman is eager to do so, and to give her something nice even if he can’t afford a ring. He doesn’t tell her he'll get engaged when she buys one for herself. (And the next step, marriage, will take place when she saves up enough money to pay for everything…)

This is perhaps the most extreme example of selfishness and immaturity we've ever seen. We think that it's unlikely that anything you do or say will change this man's mindset. His motivation to change has to come from within, and from your description, he has little internal motivation. Dragging him to a therapist isn't going to help, because even if he agreed to go it would be to appease you, not because he wants to work on changing himself.

You can give him an ultimatum – grow up or you'll leave – and be clear that you are serious about leaving and moving on. If he wants you in his life, he may be influenced to become more serious about himself. We'd be genuinely surprised if he responded by getting out of bed and looking for a job (or a therapist). Instead, we think he will turn on the charm and try to persuade you to stay; or tell you that he doesn’t care, to see how you react; or make empty promises that he has no intention of fulfilling.

We hope you have enough self-respect to make the right choice – to become pro-active in trying to find someone who will be a true life partner. But that has to be your decision – and we know it will be a hard one to reach.