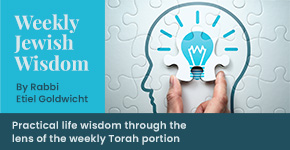 As a teen, I never understood why my school and parents cared so much about how I dressed. I thought it was the inside that counts.

In our youth, perhaps as a way of showing our independence, many of us pushed the boundaries of the accepted dress code. Society however, puts an emphasis on set attire, it’s everywhere we look: from police officer, doctor, and delivery man to fast food employees and the sanitation worker. There are uniforms for most jobs, even when we go to the office there is an excepted code of dress. What is the reason for this?

In Judaism, what was the relevance of clothing? Our forefathers were shepherds and as far as we know, they did not wear any special clothes, and neither did Moses. Yet in this week’s Torah portion, we are introduced for the first time to formal robes of office. “You shall make clothes for Aron your brother, for glory and for beauty”1

I thought that Judaism is not about external appearances, it’s about morality, humility and character, not formal attire of robes covered with gold and gems as external signs of glory?

The Hebrew word for garment is beged, which also means betrayal, as clothing are a reminder of the first great betrayal. The first time that clothes appear in humanity is after Adam and Eve go against the divine commandment and eat from the fruit tree in the garden of Eden. “Then the eyes of both of them were opened, and they realized they were naked, so they sewed fig leaves together and made covering for themselves”2 Before the sin, body and soul were one, both created and infused into one being by the creator himself, the body was just as much a source of honor and respect as the soul was.

This act of betrayal had its consequences: hence forth humans will forever want to wear clothes, as their body is now a source of embarrassment and shame. It was the bodily instincts that made the fruit tree desirable and a delight to the eyes3 which lead to this betrayal.

The Talmud4 teaches us that garments are also called Levush, which comes from the blend of two Hebrew words, Lo Bosh, not embarrassed. By wearing clothing, we cover up the body which betrayed God and the soul, and let only our face be visible allowing our souls to shine.

This is where clothes of glory come in as well. When we get dressed, which part does not get covered? Our face. The Hebrew word for face is panim, which also means inside, pnim. Our face is where our emotions, feelings and spiritually shine out to the world, it is the only body part that doesn’t bring embarrassment and does not need to be covered as it reveals our soul. By wearing a specific uniform, we allow distinct aspects of our soul and personality to shine. When a doctor wears his or her robes, he is now focused on saving lives and being there for his patient. When they come home, they take off that garb and are now a father or mother, allowing another aspect of their soul to shine.

Clothing can be used for deception, pretending to be someone that you are not. They can be used to betray, using them as beged, for betrayal. However, when used properly, which is what my parents always wanted from me, they can be used to highlight aspects of our inner strength and values. In this manner clothing are referred to as levush, no embarrassment, and the clothes take on a new role- for honor and beauty, as it allows our personality and soul to be brought to the forefront.

More Articles on Tetzaveh
MOST POPULAR AT Aish.com
The Meaning of Tu B'av
Our privacy policy
Aish.com Is Looking for Great Writers