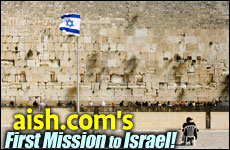 Participants from around the world fly to Israel to study and tour with Aish.com.

On October 24, 2010, Aish.com students from Canada and Spain, Oklahoma and Seattle and points in-between, arrive in Israel for a spectacular 8-day adventure of touring and studying with Aish.com.

The schedule features daily Torah study sessions with Aish.com favorites including Yaakov Salomon, Lori Palatnik and Sara Rigler – all in a classroom overlooking the Western Wall.

Plus there are exciting day trips with world-class tour guide Rabbi Ken Spiro, author of "Crash Course in Jewish History."

Check out Aish.com’s Facebook page throughout the week for live updates on the trip!

Highlights of the schedule are listed below.

Don’t miss out on the next Aish.com mission in 2011 – write to missions@aish.com for info. Next year in Jerusalem! 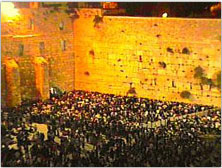 8:30 pm Visit the Western Wall
Begin our weeklong journey at the epicenter of the Jewish world, feeling the prayers of thousands of years and millions of Jews.

An awe-inspiring journey through time, transporting you to the heyday of Jerusalem during the era of the Holy Temple.

“The Layers of Jerusalem”

9:10 am Seven Wonders of Jewish History

Rabbi Yaakov Salomon is one of Aish.com's most prolific teachers and a noted psychotherapist. Brimming with wit and wisdom, his weekly "Salomon Says" video blog is an Aish.com favorite.

10:35 am How the Ordinary Can Achieve the Extra-Ordinary

Sara Yoheved Rigler spent 15 years practicing and teaching meditation and Eastern philosophy. She is now one of Aish.com’s most popular and insightful authors, whose books include the best-selling "Holy Woman," "Lights from Jerusalem," and the new "Battle Plans."

11:30 What Makes Aish HaTorah Unique? Exploring the Mission and Core Values of Aish

Aish HaTorah operates programs in 100 cities on 5 continents, and has been described as a "billion-dollar asset to the Jewish community." Get an inside understanding of what fuels this idealism and success.

Rabbi Ken Spiro - Explore astounding archeological excavations from the period of the First Temple. Rabbi Spiro is a highly sought-after tour guide and historian, known for his deep wellsprings of knowledge and endearing humor. He is the author of "WorldPerfect – The Jewish Impact on Civilization," and the recently-published "Crash Course in Jewish History,” based on essays written for Aish.com.

Enjoy a lamb lover’s feast at one of Jerusalem’s most popular dining destinations. 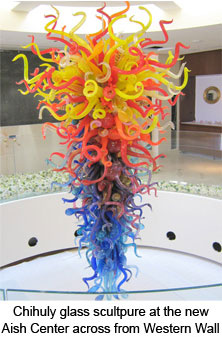 Lori is an author and Jewish educator who has appeared on TV and radio and has lectured on five continents, illuminating traditional Judaism for our contemporary world. She is known to Aish.com readers for her popular "Lori Almost Live" video blog.

10:30 am Changing Lives, One Click at a Time: The Impact of Aish.com

Join the directors of Aish.com in the Kirk Douglas Theatre and gain a deeper understanding of Aish.com's mission and the impact we are making around the world.

11:30am How to Get Your Prayers Answered

With Rabbi Ken Spiro - Journey through the biblical heartland of historic Israel, the land where Abraham, Isaac and Jacob lived and built the Jewish nation. Gush Etzion is a group of settlements south of Jerusalem, featured prominently in news reports about the peace process. Rich in pre-state history, it was the corridor into Jerusalem that held off the invading Arab armies during Israel's War of Independence.

3:15 pm Prepare Food for Soldiers
Here’s your chance to give something back to the brave young people who assist in guarding the Land of Israel.

4:30 pm Koby's Legacy, with Sherri Mandell
Hear the heart-rending, yet inspiring words of the mother of Koby Mandell, a 13-year-old boy who was murdered by terrorists while hiking near his home. Hear about the Koby Mandell Foundation which provides therapeutic retreats for Israeli victims of terror. Sherri & Seth Mandell were featured in Aish.com’s “Heroes of Israel” video series.

6:00 pm Tour and Dinner at the Gush Etzion Winery
Enjoy a delicious meal accompanied by a sampling of house specialties from the winery. 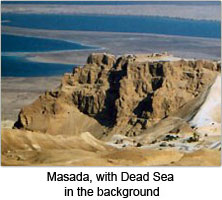 11:00 am Masada
Explore the ancient fortress of Masada – King Herod's mountain palace and site of the last stronghold where the Jewish zealots fought against the Romans. Join Rabbi Spiro in reliving this amazing time in Jewish history.

Ahava is world-famous for their skin-care products made of mineral-rich compounds from the Dead Sea.

Cap off this memorable day with a kosher Bedouin-style dinner, complete with native drums and costumes - all beneath the breathtaking, star-studded desert sky.

9:15 am Discovering the Real You: Understanding Yourself and Appreciating Others

Join the bustle as Jerusalemites prepare for Shabbat at this astounding and authentic Middle eastern open air market.

5:30 pm Shabbat Dinner at the Aish World Center
A Shabbat dinner like you’ve never had before, deliciously prepared by Aish.com’s very own Chef Hershel. Hear inspirational words of Torah and reach the heights of Shabbat joy – all with a direct view overlooking the Temple Mount and the Western Wall.

Enjoy the Shabbat mood with songs, stories and treats.

Hear the explosive inside story about media bias in the Mideast conflict from Shraga Simmons, Aish.com’s senior editor, former editor of HonestReporting.com and author of the forthcoming book, "David & Goliath."

Scrumptious Dairy Buffet at the Hotel

Dr. Gerald Schroeder has Ph.D's in Nuclear Physics and Earth and Planetary Sciences from MIT, where he taught physics for seven years. While a consultant at the U.S. Atomic Energy Commission, he participated in the formulation of nuclear non-proliferation treaties with the former Soviet Union and witnessed the testing of six atomic bombs. Dr. Schroeder is a featured lecturer at Aish Jerusalem, and is the author of several popular books, including "Genesis and the Big Bang," now in seven languages.

Enjoy free time and shopping in downtown Jerusalem, off Ben Yehuda Street where musicians, artists, tourists, students and locals all gather to shop, eat and shmooze.

5:30 pm Principles of Jewish Leadership
Rabbi Nechemia Coopersmith
Aish.com’s goals are more than just educating Jews about Judaism – we also seek to instill the value of taking responsibility to help others. Aish.com’s editor-in-chief explores the Torah’s tools for proactively making a difference in the world.

6:30 pm Final Farewell Banquet
This is not goodbye, but "la'hitra'ot" – see you again soon. A mission of memories is now yours. Bring it back, play it forward, and come “home” again soon.

Being British for 350 years
How to Become Immortal
Judaism and Mental Health
Jews and the Chocolate Trade
Comments
MOST POPULAR IN Israel
Our privacy policy
Aish.com Is Looking for Great Writers