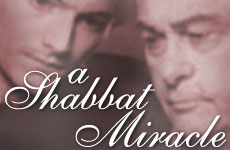 My father and I had nothing in common besides the long silences that would pass between us. Then a miracle happened.

My father and I have never shared much in our lives. In fact, almost nothing. We're so different that we marvel at the fact that we're related. Over the years we've agreed on one thing and one thing only: baseball. We can talk for hours about baseball, but only a few seconds on any other subject such as work, politics or (God forbid!) religion. That's the way it's always been and I always figured that, barring a miracle, that's the way it would always be.

Maybe it was a miracle that occurred five years ago one winter night.

My father never forgave me for two things: becoming a Republican and becoming an observant Jew.

My wife had just given birth to our first daughter and I wanted my parents, who are in their late 70's, to come to Los Angeles for the baby naming. But I knew this would be an issue. My father has never forgiven me for two things: becoming a Republican and becoming an observant Jew. And I'm not sure which one irks him more.

Still, I wanted him and my mom to be a part of our children's lives as much as possible. One thing I learned as I got a little older is that life is just too short for ridiculous things like family feuds, regardless of who "started it." So, somewhat reluctantly, they came.

Once they arrived at our home, my wife and I tried our best to make them feel comfortable in our "strange" religious world. That's when the first miracle occurred. For the first time my parents noticed that our house looked like most others they'd seen. The food we served tasted familiar too ― the chicken tasted like chicken and the bread tasted like bread. For the first time, they began to see us as people like them instead of some kind of misdirected religious nuts.

But the relationship between my father and me did not change. Still nothing in common. Still nothing to talk about. Long silences passed between us. Or worse ― my dad would lapse into one of his "golden oldies" ― lecturing me about what he thinks I should be doing with my life and what I'm currently doing wrong.

I asked my father if he wanted to come to shul with me. I told him that this was a special night as I had learned how to lead the afternoon prayer service in Hebrew in honor of the birth of our daughter and would be leading it for the first time. He agreed to come.

Leading the service went well. I felt exuberant that I had learned something that had earlier seemed impossible, having never learned Hebrew growing up. More than that, I felt tremendous joy and deep emotion knowing that my father was here to see it. He kept flashing in my mind while I was up at the bima leading the service. I so wished that I could tell him how much he meant to me despite all our differences, despite all the water under the bridge. I wanted him to know that my becoming religious wasn't a failure on his part, but a tremendous success. I wanted him to know that after all is said and done he's my dad and I love him and am proud of him.

After the service ended and the handshaking was over, my father and I left the shul and began the walk home. A palpable silence ensued. A wave of sadness overtook me thinking how I would probably never get to tell him all of those things that flashed in my mind while up at the bima. At least not in this life. Just as I was about to bring up how the Giants were playing better than the Dodgers these days, my father turned to me and spoke.

I was stunned. "Thanks, Dad. I did make a couple of mistakes, though," I replied. "Yes you did," he continued, "but overall, it was a fine job. I had no idea you could read Hebrew that well!"

The silence between us was suddenly broken and in a way it had never been broken before. We started talking about all the things we never talk about. He asked about how I learned Hebrew so well and I told him I did it pretty much on my own. He said he wished he had learned it better in his life. The conversation soared from there. We talked and laughed as we walked home. At times it felt like we were father and son who had everything in common and other times it felt like we were just two good friends enjoying a walk and conversation on a Shabbat evening. It was like nothing that ever transpired between us before.

But, as the saying goes, all good things must come to an end and as we approached my street, I knew that this good thing would, unfortunately, be no different. Once again sadness overtook me.

Just as I was starting to lament the impending loss of this magical time, my father turned to me and said, "You know, Ross, I don't agree with everything you believe in, but I think in the long run what you're doing, how you're going to raise your child and how you're living is the right thing to do."

We stood, eyes locked on each other, saying all those things we've always wanted to say to one another.

He looked down at the sidewalk. I sensed a melancholy in him as well. Perhaps a reflection on time lost, opportunities missed. All of those arguments between us that were such a waste of precious time. I don't know. Then, he looked up and smiled at me. I smiled back. There we stood ― eyes locked on each other, smiling. Somehow, that was all it took to say all those things we both wanted to say to one another. For once, it felt like we understood each other.

The Jewish sages say that the more you look for God in your life, the more He will reveal himself to you. And the more you look for miracles, the more you will see them. I saw one of God's miracles that night on the way home from shul. And I saw God's hand in the miraculous meeting of the minds that my father and I had that night, even if for a brief few moments. And for that, I will be eternally grateful.

My father and I had never had a conversation like that before nor have we had one since. But that fact that we did at all proves to me that God exists, that He truly loves us and that He can make anything happen at any time if you reach out to Him.

Make it on Sunday

Shabbos in Vietnam
The 21st President of the United States: Failure or Inspiration?
Hiding Their Jewishness
The Jewish Pope: Following the Questions Home
Comments