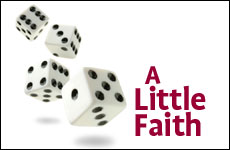 Sometimes I wonder if my non-observant mother is more religious than me.

When we decided to move to Israel and make aliyah over two years ago we did so with a wide range of emotions. We were picking up our family from the life we had always known in America, and were moving it 6,000 miles away to a foreign country with a language that at a bare minimum we could read and not much more.

We had planned and discussed our aliyah for months on end. Once our new apartment had been secured and the children were accepted into their new Israeli schools we had only one task in front of us prior to sending our lift: shopping.

We wanted to buy everything we would ever need for the rest of our lives and fit it into our lift. This included 10,000 Q-Tips, 100 bars of soap and a plethora of medicines that would definitely expire prior to being used up.

We were naive in our thinking that life without Walmart would be impossible. Once we arrived in our new homeland we saw that all of our purchases could have been made in Israel.

During our shopping excursions in the States I wanted to buy my two youngest boys new mattresses. It was toward the end of all the buying frenzies and money was running thin. So I bought them inexpensive mattresses that were cheaply made. Well, "you get what you pay for.".

My boys loved their new mattresses because they were "bouncy" and fun to jump on. The springs falling apart and their lack of support did not bother them in the least. It didn't bother me as well. I had made a mental note that when they would start to complain, I would buy new ones.

My parents felt differently. Each time they would visit they would discuss the mattress situation with me. At one point they even offered to buy new ones. I am stubborn and turned down their offer.

My parents recently came on one of their visits to Israel. A day after their arrival my mother fell and broke both of her ankles. Her stay was elongated by six weeks due to her lack of mobility and the blood clots that could develop if she flew too soon after breaking her ankles. My father returned back to the States shortly after the accident to take care of matters at home and my mother stayed on to recuperate.

My non-observant mother immediately took note that her accident was for the best. She did not complain about her lack of mobility or pain once during the six weeks. She only saw the bright side of her situation. She joked that if God wanted her to stay in Israel longer, there were easier ways for Him to have it happen than causing her to break both ankles.

I mentioned to her that there was a worthwhile organization in our community that was having a Chinese auction, featuring 80 prizes that were donated by local businesses. She thought it would be an enjoyable evening and encouraged us to go.

My mother hates the word "religious." She thinks it is misused.

As we looked at the collection of prizes my mother smiled when she saw the Grand Prize: two Sealy Posturepedic mattresses with bed frames that included ample storage. She bought a ticket and put it in the raffle box, joining the thousand-plus tickets already there.

She told me that I was going to be the proud new owner of two twin beds by the time the evening would come to an end. I thought she was out of her mind. "What makes you so sure that I am going to win?" I asked. She went on to explain that God knows how much my mattresses drive her crazy and that He only wants her to be happy and my boys to have healthy backs. Here was my unobservant mother pleading with her observant daughter to just have simple faith in God.

My mother has had a pet peeve ever since I became a Torah-observant Jew. She hates the word "religious." She thinks it is misused. She believes that although she does not keep many of the 613 mitzvot, she is as religious as anyone. She believes in God and talks to him throughout the day. "Religious" according to my mother is someone who loves and believes in God. "Observant" is someone like her daughter, a person who strives to keep as many of the 613 mitzvot as possible.

The evening at the Chinese auction was enjoyable, the food served was delicious, the speaker motivational and my mother seemed to be having a delightful time socializing with my friends. The hour was getting late and the time had come to draw the winning tickets from the 80 prizes being offered. The emcee started with the less expensive prizes in order to build up excitement as to who will win the grand prize. The event was longer than I had expected and I needed to go to work the next morning. I asked my mother if we could go home.

"Absolutely not! I want you to be here when they announce that you have won the grand prize of the evening."

I was tired but humored her. After all, both her legs were in casts, she was in a wheelchair and despite it all she was having a fantastic evening. I felt bad to cut short her fun.

Once 10:30 pm rolled around I told my mother that it was enough. I needed to wake up early for work.

She implored me to stay; they were about to announce the last 10 prize winners. They finally drew the ticket for the beds. Her faith was so great that I feared if they didn't pick my name she would lose all belief in God. I was praying that I should win the beds just for my mother’s sake.

When they announced that I had won the beds my mother immediately looked at me and smiled. It was clearly an "I told you so" smile. We walked out of the evening with me pushing the wheelchair up the ramp and her saying, "A little faith in God is all we need nowadays to know that everything happens for the best." I wasn't sure if she was referring to her ankles being broken, her elongated visit in Israel or the beds I had just won. What I did know was that her six weeks in Israel had changed both of us. She had strengthened her faith and as a result she taught her daughter to do the same.

One Drink Too Many: My Journey of Breaking Free from Alcohol
The Scandalous History of the Aleppo Codex
Who was Two-Gun Cohen?
Why Really Everyone Believes in Free Will
Should Jews Support Ukraine?
The Jews of Cuba
Comments
MOST POPULAR IN Heart of Matter
Our privacy policy