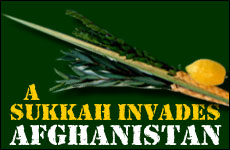 Could a Navy rabbi bring joy to a war zone?

Days after a deadly Taliban attack on a US military base in Afghanistan, a Navy rabbi arrived on a special mission. He was going to build something never before seen at this base.

"I had been preparing for this mission for months in advance of the target date," explained Rabbi Neal Kreisler, a Navy Lieutenant Commander sent from San Diego to lead High Holiday services. "It was obvious that we would need a sukkah.” 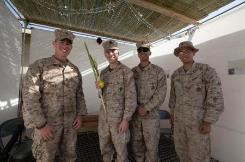 The first obstacle Rabbi Kreisler faced was getting a sukkah to Afghanistan. While the military could not purchase this religious item, it did agree to transport it. Next, Rabbi Kreisler turned to Yeshivas Pirchei Shoshanim, an endorser of rabbinic military chaplains, to locate a sukkah before the rapidly approaching shipping deadline. Founder Rabbi Fischel Todd of Lakewood emailed his contacts for help.

It was an urgent request.

"One visit to the sukkah can change a person's life, especially in a war zone," said Rabbi Todd.

Ari Werth, a community leader in New York, immediately recognized the spiritual opportunity. "In giving tzedaka, my priority is giving people the opportunity to perform mitzvot, commandments, who wouldn't have access to them otherwise," he said. "You can't get more unique than providing a sukkah in Afghanistan for Jewish Marines."

Werth sponsored the ten by ten foot sukkah, which was gifted by Pirchei Shoshanim to the US Marines. Sieger Sukkah in Los Angeles was able to provide a package deal for the cause and the sukkah kit boxes were airlifted to Afghanistan by the US Air Force.

After surviving that experience, Rabbi Kreisler headed to Camp Leatherneck, where a devastating surprise Taliban attack had just taken place, destroying $200 million worth of aircraft attack jets and taking the lives of two American servicemen. Providing spiritual strength during Sukkot was more important now than ever before. 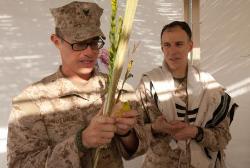 All was going according to plan until Rabbi Kreisler began assembling the sukkah. A missing box of parts brought everything to a standstill.

"We were in a pickle and a kosher one at that," quipped Rabbi Kreisler. He turned to the Seabees, the construction battalion of the Navy, who kicked into action and crafted the necessary replacement parts.

"Sure enough, as the Seabees were building the walls a Marine walks by and asks incredulously 'Is this a succah?' He was Jewish and came back to eat in the succah during the holiday week. There is no way to calculate the meaningful spiritual impact something like this can have on an individual.”

Approximately ten Jewish servicemen used the sukkah and many non-Jews, including the commanding general, came by to ask about its religious significance. The servicemen also enjoyed kosher wine and the lulav and etrog from the Aleph Institute.

"The Jewish sailors and Marines were so happy," reported Rabbi Kreisler. "This is a combat zone. You never know what will happen out here. But when you walked into that sukkah, you walked into a place of light and joy.”

The sukkah is now property of the Marines and will be deployed each year at a base somewhere around the world.

Ari Werth plans to help provide community sukkahs in other needed locations for next Sukkot and is looking for additional sponsors.

“The sukkah is a powerful way to attract Jews of all backgrounds to connect spiritually,” said Werth. “Every year we should raise the public profile of Sukkot a bit more and spread the joy of Judaism.”

Holocaust Lamentations
Evolution 2.0: The Coming Darwinian Revolution
Chukat 5782: Let’s Play the Blame Game!
The Sin of Moses: The Two Ways to Communicate
Comments
MOST POPULAR IN Israel
Our privacy policy