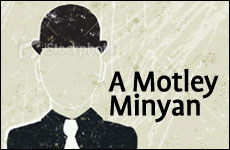 They’re frustrating and sometimes broken, but the men in my shul make services divine.

The people we see at shul get into our bloodstream. But still, try as one might, you cannot learn what is on a man’s mind or know too much about him just by davening next to him. But a glimpse you can get: Here is a man geshikt (put together), here a man tzu’brochen (a little broken), here is a man at odds with himself.

A week before Passover, I saw a man bent over a book of Tehillim – the Psalms, often read on behalf of a sick person. I asked for whom he was saying Tehillim – for his mother, his father, a member of his family? “For my wife,” he said with reticence, his voice getting progressively less audible. “I have a rough ‘shalom bayis,’” a lack of peace at home, he continued. “She is an erupting volcano before the holidays. I pray that it won’t be too bad this year.”

I thought he was joking, but then I looked into his eyes and saw a ghost-ship listing in the dead calm of the ocean’s middle. I couldn’t even hear a mayday or S.O.S . – I could only see a single, erratic flickering light, a ner tamid inside him that seemed to be kept by the synagogue’s soothing rhythm of the liturgy, the prayers minted long ago by the rabbis of the Talmud.

After Passover, I asked him how things went at home. “Best Yom Tov in years,” he told me. “We had a very nice time.”

“No,” he said. “Something changed in me so that I was able to be with her. A miracle.”

Tradition urges everyone to arrive early to synagogue, although surprisingly few do, surprising because the Talmud tells us that the man who gets there first receives the greatest reward of all, alone with the divine presence. There is such a man in my shul, successful, yet humble. He is there half an hour before minyan, morning, noon, and night, alone in the dark synagogue with his hands folded in contemplation, accumulating all the riches of the world-to-come while he waits for services to begin.

The leader of our chabura – my shul’s study group – has a face that radiates the wisdom of Torah and also, improbably, the kindness of motherhood. He gently spoon-feeds us the complex matters of the Talmud, smiling indulgently as we struggle – sometimes with a good question and other times, with klutz-kashyas (questions that betray our ignorance). He comes to shul, face broadened by Torah knowledge, features that look as if they were brushed lightly with egg, a broad Russian back that I place as having come somewhere from the Pripyat Marsh in the Russian steppes, like a genetic hiccup echoing through the generations. In short, he has a yiddisher panim. How can you not be a better person just by looking at his face?

It is not only the scholars, the leaders, who are beautiful. Even these broken ones are part of a whole – a minyan.

But it is not only the scholars, the leaders, who are beautiful. There are the broken ones, as well, often good and pious, but too often empty. But even these broken ones are part of a whole – a minyan.

One man in our shul dresses like a hobo; his hair is wild and shoulder-length, and I would like to scream at him: Get a haircut! I cannot bear when he is called to the Torah for an aliyah – I am often the Torah reader and it is irritating in the extreme to stand next to him as he makes his blessings. He makes a spectacle of himself: He reads together with me loudly and in a way that is thoroughly distracting; his spittle often winds up on the letters of the holy parchment. It is a relief when he steps down from the bimah, but he too must get an aliyah once in a while like everyone else. Doesn’t the Torah say the entire nation is holy?

One man davens three times a day at the shul, standing in the back and faithfully answering amen with devotion. Tall and prosperous-looking, he is a well-heeled professional, yet inexplicably he refuses to make a single donation of any kind to the shul. “I wish I could afford to,” he says with a laugh, before he gallops away with his tallis and tefillin, and then rushes off, presumably to his office. Why? I believe this man is looking for something in shul, and I am pretty sure he doesn’t know what it is. But I have a feeling the shul won’t receive a donation until he finds it. This, I think, is going to take a very long time.

Another man I know can always be found in shul, but never in the sanctuary. Instead, he is near the coffee machine, a sad sack who is forever injuring himself in one accident or another. He is moderately overweight, with a large body shaped like an anjou pear. One gets the impression that there is something about him that is out of whack. To be near him is to experience all manner of psychological and spiritual imbalance and disequilibrium. He dresses in garish clothes, and the way he walks and his bearing looks as though he were about to topple like an old tree. He reminds me of the Sholem Aleichem-type of Jew who is unsuccessful at everything except the winning of an odd lawsuit here and there. He is the kind of man I would like to throw out of shul. And yet, shul would not be shul without him.

After all, what is the Yiddish saying? Nine rabbis cannot daven together, but 10 illiterate shoemakers – a minyan they make. Perhaps in shul we come to terms with the broken-ness in all of us: the part of us that is out of touch, out of step.

For better or worse (and I think for better) the shul is my home. In these sacred precincts where odd bits of humanity and sacredness commingle – bits of light and loss, hubris and humility, the hobo and the prince, the schlep and the schlepped – I watch myself and my contemporaries grow old as we say amens and chant verses and see people and things that alternately torture and touch us.

Jerusalem United
Were Adam and Eve Jewish?
How I Learned to Love the Multiverse
10 Big Jewish Inventions
Comments