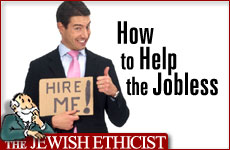 The letter of the law, and beyond.

Q. I have an employee who is quitting to look for a better job. In my jurisdiction I only have to pay severance pay if the worker is fired. Should I perhaps pay anyway to go "beyond the letter of the law"?

A. Your question regarding how to help your erstwhile employee raises two important issues of Jewish ethics, so I will divide the answer into two columns.

And you shall advise them regarding the laws and the instructions, and inform them of the way they should go and the deed they should perform.

The Talmud learns that the phrase "the deed they should perform", coming after the laws, the instructions, and the way, tells us that we should go beyond the letter of the law. It then continues:

So your desire to go "beyond the letter of the law" is certainly praiseworthy.

For example, in the above passage explains that Rebbe Yishmael beRebbe Yossi took on himself the responsibility for helping a workmen load a stack of firewood even though he was exempt. But the exemption was really a kind of technicality: Rebbe Yishmael was a distinguished and dignified figure who was exempt from concerning himself with firewood, even though an ordinary person would have been obligated. So this great sage went beyond the letter of the law and declined to take advantage of the exemption.

In the case of severance pay, this could be relevant in a number of cases. For example, some kinds of quitting are really de facto firings. Sometimes the law recognizes this in the form of "constructive dismissal". If circumstances made continued work unbearable for this worker so that he was compelled to quit, then treating him as if he had been fired would be considered "beyond the letter of the law".

But if the worker decided totally on his own free will to quit work, there is no technicality involved. So there is no issue here of "beyond the letter of the law". If you decide to help this person, it would be considered a kind of charity. An unemployed person is generally needy, and certainly it is a wonderful good deed to help a needy person with charity. Next week we will consider if the severance pay is the best way to provide aid to this needy person.

An Interview with Norman Lear

The Jewish Ethicist: Forgive and Forget?

The Jewish Ethicist: Avoid or Advise?
Who Was Josephus? The Controversial Backstory of the Famed Historian
Should I Break Up, Get Engaged or Keep Dating?
Time Is Your Precious Commodity
Comments
MOST POPULAR IN Current Issues
Our privacy policy