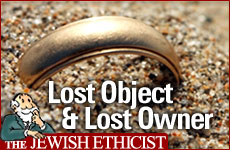 Q. A carpenter did some work for me and left his tools in my house, and I can't seem to contact him. I'm leaving town soon -- what should I do?

A. The Torah commands us to return lost objects to their owners:

When the Torah tells us "take it into your house and leave it there until your brother requests it," it means we must make reasonable efforts to restore objects to their owners. There is no obligation to make heroic efforts, or to spend money on returning the object; however, a purely perfunctory effort would be considered "ignoring" the object.

So the efforts you describe in your letter – trying to phone the man, mentioning the fact to his friends, leaving a note at his home -- would be considered part of your basic ethical obligation. But now responsibility for these objects is becoming a hardship rather than a minor inconvenience.

The mishna relates to such a case in the following instance:

Any thing which both produces and eats, let it produce and eat. But anything which doesn't produce yet eats, should be sold. As it is written, "Return it to him" -- see how it can best be restored to him. (1)

For example, a chicken which lays eggs should be kept for the owner; its upkeep can be paid for from the eggs. But if I find a horse, or if I have no practical way to exploit the eggs laid by a chicken, then the cost of upkeep will soon exceed the value of the object. In this case the owner would prefer to have the money, so we fulfill "return it to him", the kind of return the owner himself prefers.

In your case, you would be justified in selling the tools, if a reasonable valuation can be obtained for them. When the owner finally gets in touch with you, based on your messages to his friends and his house, you can just send him a check.

If the tools are not really saleable (even in the e-bay era), another possibility would be to find someone local who would fulfill the mitzvah in your place. You might ask someone, perhaps another carpenter or hobbyist, how much they would charge to store some carpentry tools. If you think they have given you a good-faith reply, then you may suggest that they hold onto the tools until the storage fee reaches the value of the tools; then they would be allowed to keep them. Perhaps someone who is a fellow carpenter may be inclined to show empathy towards the owner and keep the tools as a favor.

In all our dealings, it is a privilege when we are able to go beyond the letter of the law in terms of thoughtfulness towards our fellow man. In addition to all the specific commandments of interpersonal conduct, the Torah also commands us in a general way "Do the right and good in the eyes of the Lord" (Deuteronomy 6:18), and "Love your neighbor as yourself" (Leviticus 19:18.) However, we find in the Talmud that this kind of conduct is particularly encouraged regarding the commandment of lost objects. The Talmud tells the story of the sage Rabbi Chanina ben Dosa. A passerby once accidentally left some chickens in his yard. Rabbi Chanina took care of the chickens, sold the eggs, invested the earnings in livestock and so managed the man's earnings for years until the man finally ran across him years later, never expecting that his inadvertent "deposit" had been cared for.

In your case it is a hardship for you to take responsibility for the tools, so personally going beyond the letter of the law would be unfair to you. But it would be ideal if you could find someone who will take personal and not only professional responsibility to help return these tools to their owner. 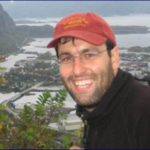 My Own Stroller5 min read