77 Years After the Holocaust, A Family Reunion 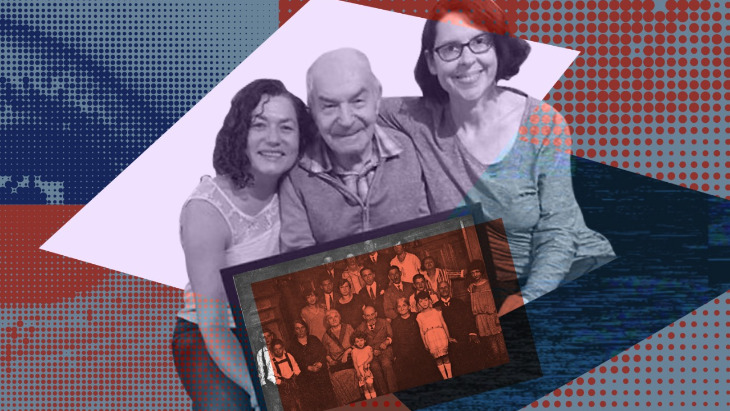 When Suzanne Hecker’s beloved grandfather Robert Weiss, a Holocaust survivor, died in 1993, she found a secret box he’d never shown his family: it contained old photographs and an Austrian passport stamped with a big swastika and the letter “J” for Jude – Jew. Suzanne’s grandfather survived the Holocaust, along with two of his sisters, but they’d never talked about their experiences or their life in Europe before the war.

Most amazing of all was a large, formal family portrait from the 1920s. “I recognized my grandfather and his sisters in the picture,” Suzanne recounted in a recent Aish.com interview, “but I didn’t recognize anyone else in the picture. Neither did my mother.” Suzanne had been very close with her grandfather and burned with curiosity about who these relatives could be.

“That’s when I started this quest,” Suzanne explains. Longing to know her relations, she embarked on what would turn into 25 years of intense genealogical research. 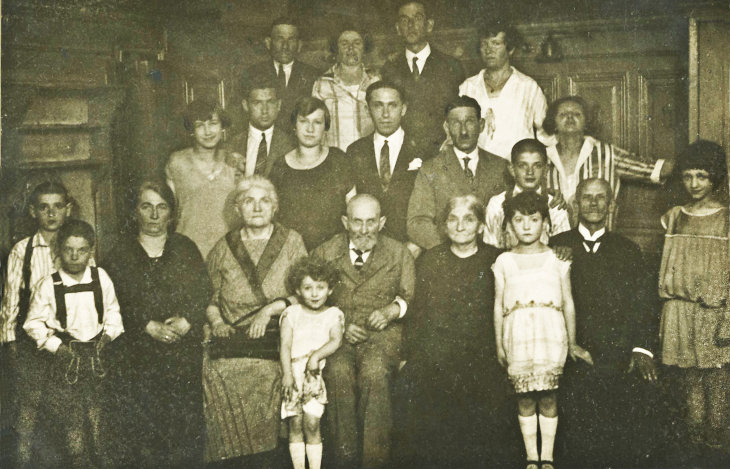 Suzanne began her research in a local Mormon church. As a Jew, she felt very awkward entering the building. “There was a big sign on the door saying there was no proselytizing in the library,” she recalls. “That comforted me somewhat.” (Mormon churches have encountered criticism for posthumously “baptizing” deceased Jews – particularly Holocaust victims – into the Mormon religion. The Church promised to stop this practice in 1995, but some instances have been recorded since then.)

Suzanne began with one photo from her grandfather’s box labeled “My uncle, Edmund Blau.” Blau was her grandmother’s maiden name, and she wondered if Edmund could be her great uncle. After years of painstaking research, Suzanne got her first clue: “I came across testimony from Yad Vashem that was done by the son of a man named Edmund Blau in Israel – the son’s name was Walter.” Could this Edmund Blau be her great-uncle and Walter her long-lost cousin?

Eventually, Suzanne managed to uncover more documents about Walter. “I found a Palestinian British police report with a mug shot of a teenage Jewish refugee named Walter Blau. He’d been caught trying to sneak into the land of Israel in 1946. “I had his birthdate and confirmation of his parents' names,” Suzanne explains, “so I knew it was the right family.” It was incredible to realize that one of her grandfather’s close relatives had survived the Holocaust, but Suzanne didn’t reach out at first. “I don’t speak Hebrew… I didn’t know where to go.”

In 2009, Suzanne and her mother took a trip to Vienna to do more research. When they reached the archives of the Israelitische Kultusgemeinde Wien, Austria’s officially recognized Jewish community organization, the staff at the front desk was less than helpful. After asking politely, Suzanne was shocked that the staff still refused to help. “I said these records don’t belong to you; they belong to her,” gesturing to her mother. Finally, the desk staff allowed Suzanne and her mother to view the precious documents in their archive. They found extensive records – but still couldn’t complete the puzzle of their family tree.

A few months ago, all of Suzanne’s research finally paid off.

“I was on a Jewish genealogy Facebook page,” Suzanne recalls, “and somebody told me about an Israeli genealogical Facebook page. I said I don’t speak Hebrew, and they said that is okay – most Israelis know at least some English.” Suzanne joined the group and asked if anyone could help her find a cousin in Israel who was a Holocaust survivor named Walter. “Within an hour I had messages and links,” Suzanne recalls in amazement. 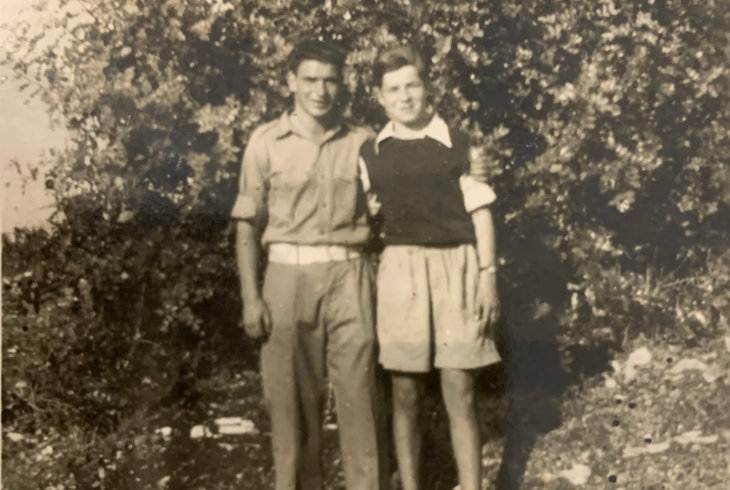 One of the links was to an interview on Israeli television with the Blau family. Some Israeli students had done a project in middle school on the Holocaust and interviewed Suzanne’s family. The names of Walter’s children bore the names of Suzanne’s deceased relatives.

Suzanne thought carefully how to approach her newly-discovered relatives and decided to send a group message over Facebook. “I believe we’re family,” she wrote. She wasn’t sure if anyone would write back.

“The response from them was immediate. It was a resounding yes, that’s definitely us. They were super-eager to be in touch.” One cousin who was fluent in English sent Suzanne the message she’d been awaiting for decades: “My father Oscar and my uncle Walter are the ones you’ve been looking for. They’re still alive.” They were 87 and 91.

Within just a few days, during Passover 2021, Suzanne, her mother and other relatives set up a Zoom meeting. “It seemed like a whole lot of people on the call,” Suzanne explains. Her cousins’ spouses and kids and grandkids all crowded into the screen. Finally, her 87-year-old cousin, Oscar, came on the phone. He described how he was born in Vienna and how he and his brother Walter were sheltered in an orphanage in Belgium during the Holocaust. “He kept saying this is a dream come true. My whole life my brother Walter and I thought we were alone in the world.”

“All I knew was both of their parents were murdered in Auschwitz,” Suzanne recalled. Oscar and Walter were able to fill in Suzanne’s gaps in family history, and she was able to tell them details about their own family too. “For example, they did not know that their father…was the youngest of eight children,” Suzanne explains.

Most moving of all, Suzanne was able to show Walter and Oscar a picture of their father. The brothers had a blurry copy of the same large family portrait that Suzanne had. They knew the people in the portrait were relatives, but they didn’t know their names. All their lives, they’d assumed that Suzanne’s grandfather was their father.

On the Zoom call, Suzanne held up the picture of Edmund Blau with whom she’d started her research decades before. This was their father, she explained. “Since the brothers got to Israel as teen-aged orphans, I knew there was almost no chance they had these pictures.”

Suzanne and her Israeli family spoke many more times, and they invited her to visit. Last November, Israel opened its borders to tourists. It wasn’t easy to take time away – Suzanne has a demanding job and her husband has some major health challenges. But the chance to finally meet her Israeli family seemed too good to pass up.

Within two weeks, Suzanne flew to Israel. Suzanne shared her excitement in a post on a Jewish genealogy Facebook page:

“After escaping Vienna in 1938, my grandfather never found surviving family. In March, after 25+ years of searching, I found his 1st cousins, who are 87 & 91, living in Israel. I Skype with them every week, but EVERY day, they ask someone when I’m coming. So my friends, TODAY I fly to Israel to meet over 30 members of my family – a reunion 83 years in the making. I am over the moon!” 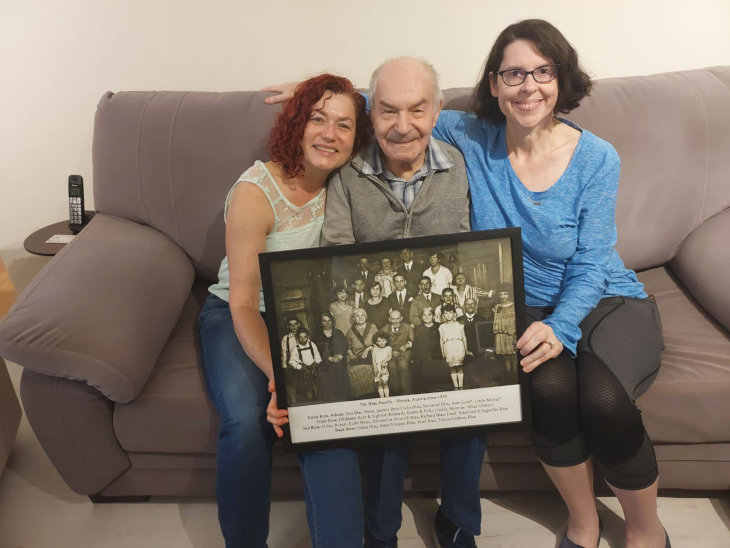 The evening that Suzanne’s plane landed in Tel Aviv, she had a brief moment of panic. “I just flew across the world to stay at the house of people I never met.” Any anxiety she had dissipated when outside the airport, two of her new-found cousins rushed to embrace her in a long hug. The connection they’d felt during phone calls was even stronger in person. Suzanne’s cousin told her, “My father wants to meet you tonight – he doesn’t even want to wait until tomorrow!’”

Suzanne went to meet her beloved grandfather’s cousin, Oscar: “When I saw him it was like looking at my grandfather.” 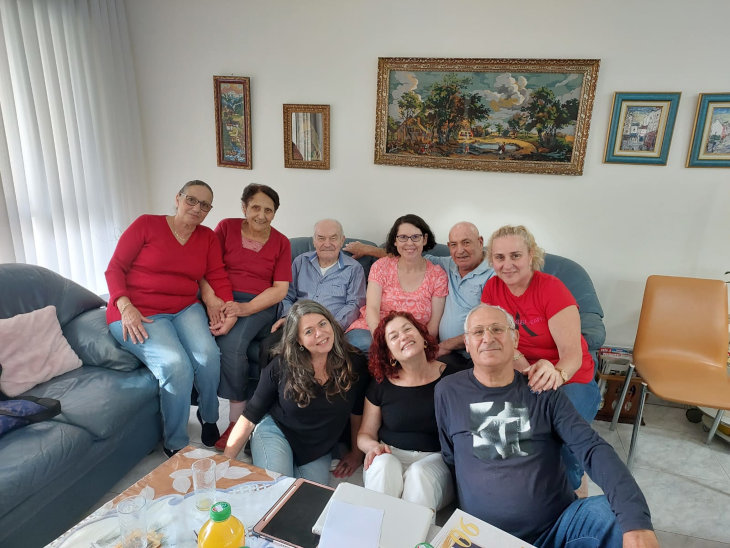 Oscar kept saying that this reunion was a dream come true. His daughter told Suzanne that this was no exaggeration. “My whole life he’s always been saying that. He’s always said he feels alone in the world, that he wished he had a bigger family.” His dream finally came true.

In Haifa, Walter’s 90-year-old wife prepared an amazing Israeli meal and they gave her a gift of Shabbat candlesticks. “They all wanted to sit next to me,” Suzanne remembers. “I broke down in tears; it felt like something out of a movie. It was a homecoming… For 25 years, I’ve been looking for family.”

“Thank you so much for finding us,” her Israeli relatives said.

Covid-19 and the Messiah

Covid-19 in the Shadows of the Holocaust