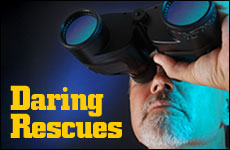 Remembering the most crucial mission of Danny Kellman’s life.

It is nighttime and a 6-year-old girl is lost in the Judean Desert, home to snakes, hyenas and jackals. She is exposed to the elements and is barefoot. She has no water, no food, no warm clothing. At first she cries hysterically, but after a while she no longer cries because she lacks the energy.

What began as a pleasant family excursion turned into a nightmare. Somehow the little girl wandered off from the others and 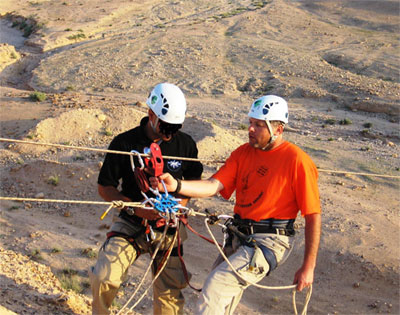 got lost. The frantic family searched in vain. A call was placed to the police. The police in turn called the Gush Etzion Rescue & Recovery Team.

Yehuda Birnbaum, the father of volunteer Pinny Birnbaum, describes: "My son Pinny was coming up the steps to the house after a hard day of work, and all he wanted was to rest. But precisely when he reached the last step, his beeper went off. Within minutes, Pinny, a former paratrooper, had taken his backpack, his GPS and his climbing equipment.

We always know by his face how each mission has ended.

"Tension encompassed our home. We tried to sleep, but we didn't succeed. Shortly after eight in the morning, the barking of dogs signaled his return home. He entered -- dirty and exhausted, but with a smile on his face. We always know by looking at his face how each mission has ended.

Pinny and his team found the girl at seven in the morning, right before the helicopters were due to arrive. She didn't have shoes and was suffering from low body temperature, but she was returned safely to her family.

The little girl was from the Arab village of Yetta in the Hebron Hills. According to historians, during the 8th century, the inhabitants of Yetta converted from Judaism to Islam. Still, for hundreds of years, they lit candles on Friday evening and only married among themselves. As a way of expressing their gratitude to the ones who saved their daughter's life, the family invited the Rescue & Recovery Team to Yetta and hosted them royally.

Also on that mission to find the young Arab girl was Danny Kelman who made aliyah in 1970 at the age of six from the UK. Danny joined the Nachal army unit in 1982. Always on the go, Danny studied karate and became a blue belt. He later worked as a police bomb sapper, and volunteered for Magen David Adom as a medic and ambulance driver. One time Danny was accompanying a man in the ambulance who had probably broken his leg. "He was in total agony. I rolled up a towel and placed it under his leg. He let out such a sigh of relief," Danny related. "Such a simple act made such a difference in this person's life.”

As a volunteer for Magen David Adom, Danny would frequently work alongside volunteers from the Gush Etzion Rescue & Recovery Team. One day he was asked to join their team, and went on to volunteered as a medic, as coordinator of manpower, and as head of the unit that does climbing, rappelling and extrication. 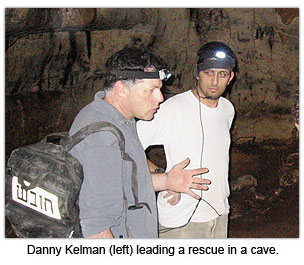 The Rescue & Recovery Team is comprised of 30-40 volunteers. How often do they get a call? "There is an incident about once every week and a half. Sometimes we can solve the problem with a phone call," Danny said. "One has to know how to ask the right questions.”

In the case of a missing person, the team will go to the family to ask questions and compile a profile: height, weight, eye color, skin color, clothes, who are his/her friends, etc.

Before each rescue, a front command room (ChaPaK - cheder pikud kidmi) is set up with medical and rescue equipment. Danny explained, "Let's say that two boys are lost along a river bed. We use a computer to plot their starting point. Using data such as the size of the hikers, the duration of time they've been lost, etc., a bubble-like map is produced which shows the furthest they could have gone in all directions. After deciding what equipment to take such as ropes, hot soup, etc., our team is sent to the highest point in the area in order to scout as much of the area as possible. Then the search begins."

Because the Rescue & Recovery Team is comprised of volunteers, they rely on contributions to purchase new equipment. They are currently hoping to obtain a tripod which sits on top of a cliff -- with a rope attached to the stretcher below -- which ensures that the stretcher does not bump into rocks on its way up. They are also seeking to obtain a titanium netted stretcher to use in evacuating victims from caves, tunnels and deep holes.

Did fear ever grip Danny before or during a rescue mission? "In a rappelling operation, going the first step off the edge is the scariest part. There is 100% reliance on the team. The guy at the top could be in charge of the rappelling equipment with five rescuers and a stretcher down below. There can be no mistakes."

Over the past few years, Danny’s family and friends supported him on the most crucial mission of his life: a battle against cancer which began in his kidney and metastasized to organs such as the lungs and liver.

On November 23, 2009, Danny Kelman passed away, leaving a wife and four children.

Danny had spent a lot of time thinking about why he was attacked by cancer. "If God wanted me to die,” Danny reflected, “He could have done it by having me blow up from one of the bombs that I have neutralized. So it must be there is a deeper message here for me.”

Danny’s relationship with God was greatly strengthened during his ordeal. He participated in a weekly Torah class -- whether arriving on his two feet or by being pushed in a wheelchair. Despite the ever-present pain and the pain killers which altered his thinking and concentration, he remained an active participant.

Seeing Danny at synagogue in his wheelchair profoundly impacted other people's prayers. This year on Yom Kippur, during the final Neilah service, the congregation reached the phrase, "Our Father, Our King, send complete recovery to the sick of Your people." The rabbi announced at that point the recital of a chapter of Psalms for Danny’s recovery. It was probably the most powerful communal prayer that the congregation has ever prayed.

May his memory be for a blessing.

To help purchase equipment for the Rescue & Recovery Team, please write to dannykelman@gmail.com

Hope for Life
Why Are The Prayers Of Yom Kipur So Repetetive?
Ha'azinu 5783: A Time for Unity!
Twisted Thinking
Comments