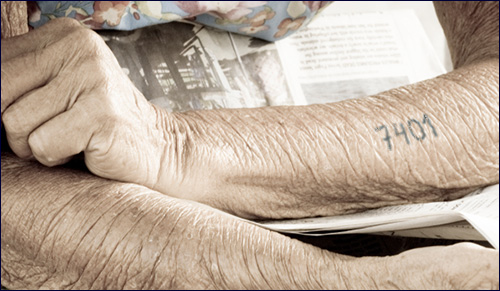 Tuvia Ariel’s amazing true story about a number from the Holocaust.

As a child growing up in the Bronx, the last four digits of Terry Noble’s phone number were 7401. Coincidence: When Terry was assigned a social security number, the last four digits were 7401. And years later, when he found himself as a volunteer on a kibbutz in Israel – where he now called himself Tuvia Ariel – he worked with a carpenter whom he respected. The carpenter was a wiry, solid man, dedicated, the silent type. Ariel learned that he was one of the few who had escaped Auschwitz and survived, that he then joined the Polish partisans, then the British Army. It sent him to Palestine, where he deserted to join the Palmach, the Jewish fighting force, and helped Israel win her independence in 1948.

Ariel had read the number tattooed on his arm. The last four digits were 7401.

But more than awe piqued Ariel’s curiosity about this survivor’s experiences in the Holocaust. Ariel had read the number tattooed on his arm. The last four digits were 7401.

“Don’t talk about it!” Ariel recalls the carpenter telling him forcefully, painfully. “I lost my whole family, my mother, my father; there was a brother in back of me, a brother in front of me – I’m the only one left. Don’t bring it up again!”

Tuvia Ariel is a man with many stories. In fact, he is a story: the man who was once a famous musician’s adviser and arranged for kaddish to be recited for an estranged Jewish radical; the man who put in a stint at Yale Law School and was a soldier in the U.S. Army in Israel during the 1956 Sinai war. He tore the “USA” from his uniform and, looking like an Israeli, hitched his way down to the Sinai Peninsula, ready to fight, only to find that the war had ended two hours before.

I was told in advance how colorful Ariel was, but nothing prepared me for the likes of a comment he made one hour after I met him on Friday afternoon. I knew he had a new leg. I knew it was breakthrough for him. But who gives thought to such things? Who wonders what it is like to be without a leg, or with a new one?

Praying in the synagogue on Friday, I sensed nothing unusual as Mincha came to an end. Suddenly, Ariel approached me, almost in tears. “This is the first time in my life I prayed the Shemoneh Esrei standing up. I have never been able to address God like any other Jew, beginning the prayer by taking three steps forward, ending it with three steps backward…”

He saved his life by cutting off his own leg as it got caught in a machine he operated on a kibbutz.

Ariel was raised in a non-observant home, in which the Shemoneh Esrei was not recited. Then he went to Israel to volunteer. In 1967, on the fiftieth anniversary of the Russian Revolution, he saved his life by cutting off his own leg as it got caught in a machine he operated on a kibbutz – a machine that sucked his leg into its grinder and from which the rest of his body escaped only by his quick and gruesome self-amputation. A little over ten years later he became a religiously observant Jew. By then he was rotating between a wheelchair, crutches, and artificial legs, which, however, could never keep him standing still long enough to pray the Shemoneh Esrei.

Then, that Friday, he did it. After walking home (only three blocks), he choked up again, “That’s the longest I’ve walked in 22 years.”

He was fitted with a new leg only shortly before – the day the Berlin Wall crumbled. He found his new leg innocently enough. Ariel was in the United States at the beginning of 1989 on a business trip. He saw an advertisement, featuring a new kind of plastic developed for spacecraft, also used for artificial limbs. The ad featured amputees engaged in vigorous basketball, not from wheelchairs, but standing up, running, passing, even jump-shooting. A regular game.

Not with people amputated below the knee, but above the knee.

Ariel thought to himself that seeing this was like seeing a grandmother, who had died long ago, suddenly walking down the street. When he lost his leg 22 years earlier, he never thought he would see himself live normally again – and here were people just like he was, playing basketball.

He inquired and was directed to an advanced prosthetic clinic in Oklahoma City. For above-the-knee amputees the old system had the stump rest on the prosthesis, which caused pain and circulatory problems and often did not work well, sometimes not at all. Using the new, flexible, rubber-like plastic, the new prosthesis grips the stump, which not only relieves pain and circulatory problems, but also better channels the energy and movement of the stump into natural, leg-like movements.

Ariel’s goal reached even beyond making the technology available in Israel. He aspired to establish a “Hebrew Free Limb Society” to provide a limb to the amputee as a loan, until – only a person like Ariel has the right to make this pun – “the amputee gets back on his feet.”

Strictly speaking, it is not idealism that motivates Ariel. It is something more – his sense that he has been designated as an angel of God before. He has reason to think this, and the way he sees it, his years of suffering now make him a messenger again – to help those whom the world forgets. Why is he certain he has been an angel once before, thus able to be so once again?

Ariel volunteered on two kibbutzim. The one where he lost his leg preferred that he leave the country. He was an embarrassment to the kibbutz. But Ariel would not leave Israel, no matter what. It took him about five years of various struggles to get into tourism schools; and somehow, between cars, crutches and artificial limbs, which kept him in pain and then went bad altogether, he remained a tour guide for 15 years.

Toward the beginning of his career, when he was low man on the totem pole, he was assigned to pick up tourists at the international airport in Lod and to bring them to the main office, whereupon an experienced guide would take over.

He yanked up his sleeve to show Ariel a number tattooed on his arm. Ariel looked, almost went into shock.

One day he picked up an American, ostentatiously wealthy, ostentatiously dressed and mannered. Even crude. Ariel could not bring himself to be friendly, so he was formal. Halfway from Lod to Jerusalem, the tourist, a perceptive man, yelled, “Pull over!” Ariel pulled over. The man barked, “You think I’m just a materialistic American tourist, don’t you? Well, I’ve paid my dues!” He yanked up his sleeve to show Ariel a number tattooed on his arm. Ariel looked, almost went into shock, and before he knew what was happening the tourist was saying, “I lost my whole family … a brother in front of me, a brother in back of me…” Ariel’s mind burned.

The man’s face was florid. Ariel calmed himself, saying simply, “Was your brother’s name Shimon?” The red face turned white. “We’re turning around, I’m not taking you to Jerusalem.”

Ariel made a U-turn and drove one-and-a-half hours to the kibbutz where he had worked with the wiry carpenter, near Afula. The psychic noise in the car was palpable. Finally Ariel reached the kibbutz and then the carpenter shed. He saw his former supervisor for the first time in ten years. Without introduction, he said simply: “Was your brother’s name Reuven?”

Ariel returned to the taxi, unloaded it, told his American tourist, “Come. I am bringing you to your brother.”

He led him to the carpenter shed, did not enter – did not want to infringe on the privacy of the moment – then made a U-turn and drove to the entrance of the kibbutz. He stopped, and wept.

When he had seen the number tattooed on the tourist’s arm, the last four digits were 7-4-0-2.

Does Being Religious Help You Get a Job?

Did I Lock the Door? Living with OCD
Extras In Our Own Epic
Evolution 2.0: The Coming Darwinian Revolution
Chukat 5782: Let’s Play the Blame Game!
Comments
MOST POPULAR IN Spirituality
Our privacy policy