Did You Ask A Good Question Today? 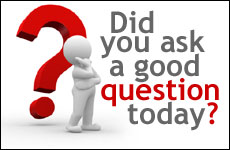 Judaism is a religion of questions.

Isidore Rabi, winner of a Nobel Prize for physics, was once asked why he became a scientist. He replied: "My mother made me a scientist without ever knowing it. Every other child would come back from school and be asked, 'What did you learn today?' But my mother used to say, 'Izzy, did you ask a good question today?' That made the difference. Asking good questions made me into a scientist."

Judaism is a religion of questions. The greatest prophets asked questions of God. The Book of Job, the most searching of all explorations of human suffering, is a book of questions asked by man, to which God replies with a string of questions of His own.

The earliest sermons usually began with a question asked of the rabbi by a member of the congregation. Most famously, the Passover Seder begins with four questions asked by the youngest child.

So I can identify with Rabi's childhood memories. When I left university and went to Israel to study in a rabbinical seminary, I was stunned by the sheer intensity with which the students grappled with texts. Once in a while the teacher's face would light up at a comment from the class. "Du fregst a gutte kashe," he would say (you raise a good objection). This was his highest form of praise.

Rabbi Dr. Abraham Twerski tells of how, when he was young, his instructor would relish challenges to his arguments. In his broken English he would say: "You right! You a hundred prozent right! Now I show you where you wrong."

Religious faith has suffered hugely in the modern world by being cast as naive, blind, unquestioning.

The scientist asks, the believer just believes. Critical inquiry, so the stereotype runs, is what makes the difference between the pursuit of knowledge and the certainties of faith. One who believes in the fundamentals of a creed is derided as a fundamentalist. The word fundamentalist itself comes to mean a simplistic approach to complex issues. Religious belief is often seen as the suspension of critical intelligence.

As Wilson Mizner once put it: "I respect faith. But doubt is what gets you an education." To me, this is a caricature of faith, not faith itself.

Questions testify to faith -- the universe is not impervious to our understanding, life is not chance.

What is the asking of a question if not itself a profound expression of faith in the intelligibility of the universe and the meaningfulness of human life? To ask is to believe that somewhere there is an answer. The fact that throughout history people have devoted their lives to extending the frontiers of knowledge is a moving demonstration of the restlessness of the human spirit and its constant desire to transcend, to climb. Far from faith excluding questions, questions testify to faith -- that the world is not random, the universe is not impervious to our understanding, life is not chance.

That, I suspect, is why Judaism encourages questions. On the phrase: "Let us make man in Our image, according to Our likeness," Rashi, the 11th-century biblical commentator, says: "This means, with the power to understand and to discern."

Critical intelligence is the gift God gave humanity. To use it in the cause of human dignity and insight is one of the great ways of serving God. When faith suppresses questions, it dies. When it accepts superficial answers, it withers.

Faith is not opposed to doubt. What it is opposed to is the shallow certainty that what we understand is all there is.

Exodus: What's the Big Deal?
Why Are The Prayers Of Yom Kipur So Repetetive?
Ha'azinu 5783: A Time for Unity!
Twisted Thinking
Comments