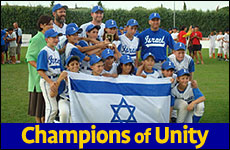 Fifteen boys see beyond their ideological boxes and win the gold.

Herbert Hoover, the 31st President of the United States, once remarked, "Children are our most valuable natural resource." The summer of 2009 has proven this statement to be true for the State of Israel.

Many months ago, a difficult process began as 11 and 12-year-olds from all over Israel were nominated by their local coaches to tryout for the honor of representing Israel as members of the national little league baseball team. In the end, 15 were chosen to travel to Europe where Israel has never won a baseball tournament at any level.

At first glance, this team seemed doomed for failure, simply based on the players' backgrounds. In a country polarized by the ideological boxes how could this group possibly succeed? The team was comprised of secular boys from kibbutzim, boys with national religious backgrounds, and even boys from more haredi leaning schools. Since, unity is required to produce the teamwork necessary to win at all levels, on paper this team seemed bound to repeat Israel's past failures to emerge victorious from baseball tournaments abroad.

They were Jews. They were unified as one.

Once all the labels and barriers were put aside, they went to Italy, dominated their games, and returned to Israel two weeks ago with the gold medal. 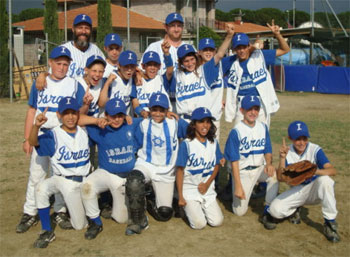 Fifteen 11 and 12 year old Israeli boys went to Europe and stood proudly in their blue and white uniforms and holding a large, Israeli flag as they were presented with the first place trophy. They were champions.

These children taught us how much we can accomplish if we would simply put our differences aside and unite as the Jewish people and as citizens of Israel, regardless of how we look externally and our level of religious observance.

It has not been an easy year for the Jewish people and the State of Israel. War. Terrorism. Poverty. Lack of water. Worldwide Anti-Semitism. A soldier in captivity. Widely publicized criminal acts. And more. We have no shortage of problems facing our nation with no realistic solutions in sight. But all Jews look to Rosh Hashana, the approaching new year, with hopes and dreams that our plight will improve.

Perhaps it is time for us to try a different approach and follow the example of "our most valuable natural resource" and internalize what our national little league team put on display during their recent championship run. Maybe we should try to stop focusing on that which makes us different and treat all fellow Jews with the dignity and honor they deserve.

If we begin to start acting like we are one unit and on the same team, we will set the Jewish people and the State of Israel towards accomplishments of championship proportions.

Meron: The Tragedy of Them – No, Us
The 21st President of the United States: Failure or Inspiration?
Hiding Their Jewishness
The Jewish Pope: Following the Questions Home
Comments