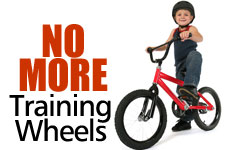 Rethinking the limits we set for our children and ourselves.

On a summer afternoon many years ago, I stood in my front yard and watched my neighbor teaching his four-year-old son how to pedal a new bicycle. The father hovered nervously as the boy tried to balance himself between his bike's rear training wheels. Just then a blurred figure whisked by – my own four-year-old son, riding confidently on his own two-wheeler, sans training wheels.

Was it? I hadn't thought so, even though I couldn't ride a bike with confidence until I was nearly 12.

My son wanted to learn. Who was I to stand in his way?

I'm not one of those parents who push their children to become hyper-achievers. Rather, it was my son's relentless petitions to remove his training wheels that had prompted me to reach into the tool box and retire that extraneous hardware to the back of the garage with so much other junk. I never consulted books or articles or experts about the age at which a boy is developmentally ready to ride a bicycle.

My son wanted to learn. Who was I to stand in his way?

It took some time on my part, and a good bit of huffing and puffing, gripping the back of the seat with white knuckles and running along beside him, first in the back yard and later in the street. But who ever said being a parent was easy?

In less than a week my son was tooling around on his own, a bit shaky at first, but more boldly and self-assured with each circuit around the neighborhood. By the end of the school year, he was still in only boy in his class who had learned to ride. It was hard not to be proud. Maybe my son really was amazing. Maybe he would excel in basketball or football as well as bicycling. Maybe he would win an athletic scholarship to UCLA or Ohio State, become a college all-star and a first-draft pick, break every professional record, and land a $50 million endorsement contract with Nike.

Or maybe not. Was I already turning into one of those over-zealous parents who live vicariously through their children and make them neurotic in the process? What if I pushed my son too hard and made him hate sports forever, or convinced him to set his heart on an unachievable goal? Wasn't it safer to take it slow and err on the side of caution rather than encourage him to reach for the sky and risk setting him up for anxiety or disappointment?

THE ROOT OF ALL FAILURE

For decades now, psychology and education gurus have been telling us that all our problems stem from a single root: low self-esteem. When we don't feel good about ourselves, we lack confidence in our own ability to achieve; without confidence, we can't motivate ourselves to try; unmotivated, we never do achieve, reinforcing our feelings of inadequacy and perpetuating a vicious circle of substandard performance.

By lowering expectations, by diluting standards, by broadening the definition of success to include effort and attitude and environment, we make it possible for our children to succeed and enable their self-esteem to flourish.

Kids are neither as shallow nor as fragile as its advocates would have us believe.

That's the theory. The problem is that it doesn't work, mostly because kids are neither as shallow nor as fragile as its advocates would have us believe.

If I have learned anything in my years standing in front of a class room, it is that kids can spot a phony a mile off – and certainly when it's standing only a few feet away at the front of the class. Students know whether they have had to work for their grades. And every student, no matter how grade-conscious or grade-indifferent, feels better about himself for having earned a B than he does for having been given an A. Even the student who fails because of laziness learns the consequences of inaction and, with a little guidance, learns that he can climb out of the hole he has dug for himself.

True, low self-esteem will produce a vicious circle of low achievement. But high yet realistic standards will create a virtuous circle wherein genuine achievement begets sincere aspirations to attain ever-higher goals. By sheltering our children from expectations that challenge their abilities, we steal from them the opportunity to experience the joy of meaningful accomplishment and condemn them to a life of complacency and mediocrity... as well as that bugaboo, low self-esteem.

King Solomon warned us, parents and educators alike: teach every youth according to his own way. Each child is a unique combination of talents, abilities, emotions, and desires. To help our children channel those qualities in the pursuit of excellence, to awaken in them the passion to reach for the stars – this is the greatest gift we can give them.

My son hasn't grown up to become an Olympic athlete. I'll probably never find his name in a sports almanac or see his picture on a box of Wheaties. But I'll always remember the expression on his face that summer's day as he zipped up and down the street, standing up on his pedals, shooting me a grin as he watched me watching him and recognized the pride I felt.

No one ever told him that four-year-olds can't ride bicycles.

On his next pass, he locked down his coaster breaks and skidded to a stop. "Will you teach me to ride with no hands?" he asked, eager to conquer his next mountain.

"Not today," I said with a smile. Understanding limits also builds self-esteem.

"Okay," he said. And, still grinning, he was on his way again. 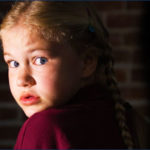 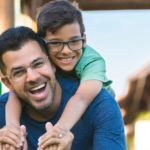 PODCAST: What Boys Need from their Dads1 min read