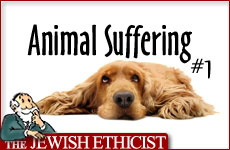 Animals and people are kindred spirits, but far from equals

Q. Is it forbidden to purchase products that were produced due to animal suffering, such as cosmetics tested on animal?

A. We have related to animal welfare questions before, but because of the importance of the topic this time we will discuss it at greater length, in order to express the underlying principles.

Animals have always been an important part of human existence; from the dawn of history until only a few generations ago, virtually every person from the poorest to the richest lived in the intimate company of domestic animals. So it is hardly surprising that the Torah devotes much attention to the place of animals in creation and to their relationship with mankind.

Indeed, following the creation of man the first thing God does is to define his place in creation. First we learn that only man is created in God's image; in the following verse He gives man "dominion over the fish of the sea, and the fowl of the air, and over every living thing that creeps upon the earth" (Genesis 1:26). Yet in the very next verse He qualifies: "I have given you all the herbs bearing seed on the whole face of the earth, and every tree bearing fruit giving seed, I have given you to eat." Man is meant to dominate the animals, but he is not allowed to eat them, indicating that the animal soul is worthy of consideration.

In the second chapter of Genesis, God sees that Adam needs companionship, "a help corresponding to him." First Adam seeks this companionship among the animals, but he doesn't find it there, but only with Eve, a human companion. Again we see that animals are in some sense kindred spirits to man, but they are not truly friends of companions.

Only two chapters later, we find an additional nuance helping us define the exact relative standing of animals and people. The brothers Cain and Abel both sought to bring a sacrifice to God; Cain brought produce, whereas Abel brought an animal sacrifice, "from the first-born and the fat of his flock" (Genesis 2:3-4). Given the meaningful standing of animals, we might have think that Abel's sacrifice would have been shunned, but we find on the contrary that specifically his offering was accepted. So while eating animals was not permitted, sacrificing them was evidently proper.

In chapter 6, we again find that man and beast have their fates interlinked; faced with rampant immorality, God decides to blot out "both man and beast." Subsequently, there is a noted change in the relationship; we learn that after the flood, mankind is suddenly allowed to eat animals. This could be interpreted to mean that man's status is suddenly elevated, but it is more likely the opposite: that given man's bestial behavior before the flood, man needs a sign of his status to remind him that he is distinguished from the beasts.

As mankind's holy mission is renewed on Mount Sinai at the giving of the Torah, animals are again not neglected; already in the Ten Commandments we find the commandment to give beasts rest on the Sabbath Day. (Exodus 20:9, Deuteronomy 5:13.)

Later we find a host of commandments mandating humane treatment of animals. These include: helping to unload an overburdened draft animal (Exodus 23:5); not muzzling an ox as he helps in threshing the grain. (Deuteronomy 25:4.)

We also find a limitation on the post-diluvian permission to eat meat, as the children of Israel are permitted only certain animals, only after humane slaughter, and without consuming the blood. Many commentators view this is a sign that the giving of the Torah marks the turning point in man's evolution, and sets him back on a path of ethical advancement returning to his exalted status at the time of creation.

Next week we will continue with an explanation and elaboration of the role of animals in Jewish tradition, but the starting point is the statements in the Torah that we have seen today.

On The Brink in Ethiopia

The Jewish Ethicist: Is Business Ethical?

The Jewish Ethicist - Price Fixing
The Blue Beyond
Great Place to Live
Is Eating Supposed To Be Spiritual?
Comments
MOST POPULAR IN Current Issues
Our privacy policy