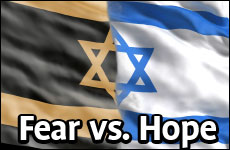 Israelis' anguish is too little acknowledged.

''I know that the Arabs working here are all good Arabs," says my grandson Oze. We're sitting together at a dinner in a hotel in Tiberias. I'm surprised and saddened that he's somehow become conscious that the waiters are Arabs. We've vacationed at this hotel many times before. The waiters haven't changed. They've known Oze's father as a boy, and have happily greeted the arrival of the newest generation of guests. No one has mentioned the waiters' ethnicity, but somehow Oze knows and cares. Because he's heard so many times in his short childhood that "there are good people and bad people, good Jews and bad Jews, good Arabs and bad Arabs," he's worked out that these must be the "good Arabs."

Amid the sunshine in this city on the Sea of Galilee, the cold memories of winter return. Last December, the radius of rocket fire expanded to include the farming community where Oze's family lives. He turned pale and slept poorly, attending nursery school underground. The living room window was boarded up for lack of a safe room, and in the playground he would race for shelter at the sound of the sirens. It was his first experience of war. But then, he only now just reached five years old. 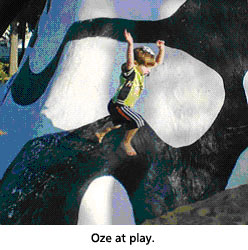 Oze's new nervousness around the waiters is germane to the thought-provoking questions asked recently by the Washington-based, peace-seeking organization Search for Common Ground, which has called for papers from laypeople and professionals about fear and its impact on the conflict (to be published on the organization's multi-language Web site). Asks Search for Common Ground: "What are the underlying fears that drive our conflict and how much of an impact does the day-to-day reality have on people's fear levels? Does fear override hope? If so, how can one use hope to override fear?"

There's an introduction to the Call for Papers to prime the well of thought. "Israeli fear is associated with a profound 2,000-year history of Jewish persecution culminating in the trauma of the Holocaust and fears for the continued existence of the State of Israel amid reports of growing anti-Jewish and anti-Israel actions worldwide."

The assumption that our lachrymose Jewish history is the cause of our fears seems fundamentally wrong to me. Personal experience is far more powerful than historical consciousness.

The primary reason for our fear is the up-close and personal experience with frightening events.

On Passover we attempt to vicariously enter the sandals of our foreparents who personally experienced the Exodus from Egypt. When we sing to a rather cheerful melody that "in every generation, someone rises up against us to destroy us," it's easy to hope that we are members of a privileged new generation immune to such experiences. But waiting out a missile attack in a bomb shelter, dodging rockets or shrapnel, alters such sensibilities. Persecution of Jews throughout our history has indeed heightened our sense of vulnerability, but the primary reason for our fear is the up-close and personal experience with frightening events.

The past decade began with the exploding buses and blasted bar mitzva parties of the intifada in every major city and many villages. In 2006, rockets rained down on the North, while they were already falling in the South. These experiences make us in 2009 different from and more cautious than those who began the decade with a majority approving the compromises of Camp David in 2000.

The anguish on the Israeli side - not of the Holocaust but of the past decade with the Palestinians and Hizbullah - is too little acknowledged. The most egregious example is the pilgrimage of visitors to lament the destruction in Gaza during Operation Cast Lead without reference to the 5,700 rockets and 4,000 mortar shells shot at civilians from post-disengagement Gaza. This blindness to our experience and fear compounds our anxiety about the trustworthiness of those who urge us to take additional risks for peace.

What many would-be peace brokers seem unable to understand is that our fear is not a struggle with post-Holocaust psychosis - something that can be soothed with reassuring dialogue and psychotherapy - but an ongoing protective reaction to ongoing threat. Despite their parents' attempts to shield them from demonic rhetoric, Oze and his classmates know that enemies exist who vow to kill them, along with mommy and daddy, and grandma and grandpa, too. Fear indeed tempers the risks we're all willing to take for peace.

Those outsiders who minimize the peril are often those least vulnerable to the threats.

As we have long noted with a certain amount of understandable cynicism, those outsiders who minimize the peril are often those least vulnerable to the threats. (Take, for example, the irony of a world leader traveling in the bullet-proof popemobile recommending removing protective barriers.)

Can hope indeed overcome fear? We are a gregarious people with a religious tradition of optimism. Our central prayer concludes, "God will grant us courage and peace." The Hebrew for courage is oze, for which this very grandson has been named. But hope isn't enough. Trust building is the best antidote to fear. Show us through words and deeds that our fears are irrational and we'll find the courage to overcome them. Let those who want to pool talents and find the way to use our mutual resources for good please step forward.

Yes, that takes courage, too.

The waiters are indeed good Arabs, good people, friends, I tell Oze. The first time he fills his plate at the kids' buffet across the dining hall, I go with him. But by the time he wants seconds, he goes alone, returning with a plate piled high with hot dogs and chips, grinning in triumph.

A Soldier and an Old Woman
Is Grease the Word?
Dried Fruit Compote
Scientific Curiosity and the Divine Encounter
Comments
MOST POPULAR IN Israel
Our privacy policy
Aish.com Is Looking for Great Writers