Beauty and the Greeks 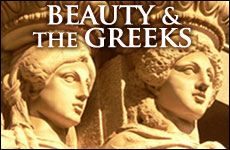 What was the underlying conflict between Jewish and Greek philosophy?

The ancient Greeks were obsessed with aesthetics and held beauty above all. The Greeks also championed the potential of the mind, and the works of their philosophers remain required reading at universities to this day. Far from keeping this idea to themselves, the Greeks spread their value system to every culture they conquered. In an astounding military campaign in which Alexander the Great conquered large swathes of the world and remained undefeated, the Greeks created a vast empire through which they broadcast their message.

Yet when Greek culture and its way of life reached the land of Israel, it met with incredible resistance from the rabbinic establishment. For the two centuries leading up to the story of Chanukah, years during which the Jews were exposed to Greek culture, the rabbis maintained their relentless opposition to the Greek way of life.

Things came to a head when Antiochus the Greek finally outlawed the most essential practices of Judaism. The rabbis refused to back down, and were willing to risk everything to preserve the Jewish way. The resulting conflict became the miraculous story of Chanukah, the Jewish triumph over the Greeks, and the establishment of an independent Jewish government in Judea.

The underlying conflict between Jewish and Greek philosophy begs explanation. What was so bad about the beauty that the Greeks extolled? Are aesthetics dangerous? Why were they so vehemently against Greek culture even before it outlawed the practice of Judaism?

In a similar vein, what bothered the Greeks? They had political control and what appeared to be clear military superiority. Their culture dominated the world. What was it about the stubborn band of Jews in Judea that so irked them? What pushed them to go so far as banning another people's religion?

Why didn't the rabbis embrace a thinking culture that appreciated physical beauty?

The answer cannot be that Judaism frowns on beauty. The Beit Hamikdash, the Holy Temple, was replete with gold and silver. Designed and built according to prophetic instructions, it was known as one of the most beautiful structures in the world, and the remnant of the complex that survives to our day hints to its grandeur. Jerusalem itself is called the epitome of beauty in the Book of Lamentations. The Torah commands us to beautify our fulfillment of commandments with physical beauty, and have a beautiful sukkah, shofar, and more. The Torah itself emphasizes how some of our holiest ancestors, Sarah, Rivka, Rachel and Yosef were extraordinarily beautiful people -- physical beauty noticed by the most powerful monarchs of the time.

What, then, was wrong with the Greeks? Why didn't the rabbis embrace a thinking culture that appreciated physical beauty?

The answer lies in the core definition of beauty. Classical beauty, the conception of aesthetic that survived the millennia, stems from harmony. Without harmony, we tend to find visual stimuli either boring and bland or chaotic and overly busy. One example of harmony is found in symmetry; an image which is perfectly balanced is appealing. The Greeks were obsessed with the human physique, itself a marvel of perfect symmetry. We also find harmony in sharp contrasts such as in the sight of a deep valley against the backdrop of a tall mountain.

Even for the less artistic among us, perception of color illustrates this idea. We see beauty in the use of analogous colors, colors which are adjacent to each other on the tertiary color wheel, a progressive arrangement of 12 colors ordered according to their wavelengths. Yet we also see beauty from contrasts, particularly from complementary colors which are directly opposite each other on a color wheel. Both reflect harmony that unites the colors of the medium, either through contrast or complement, and presents one with a balanced visual medium.

With this background, we can understand the real war between the Greeks and the Jews. While the Greeks understood the harmony in physical beauty, they missed the point. The ultimate harmony is the union of the spiritual and physical worlds. It creates a beauty like no other, an effect so powerful that any attempt to imitate it is an insult to the notion of beauty.

Jerusalem is the essence of beauty, the point where heaven and earth kiss.

There is no greater harmony than the connection between material things and their spiritual source. Jerusalem is the essence of beauty in Judaism; it is the point where heaven and earth kiss, a bridge between two realms, one side of a symmetrical phenomenon. According to Jewish tradition, the physical energy that sustains every part of the world flows from Jerusalem. King Solomon understood how Jerusalem connects every corner of the earth to its spiritual source, and was even able to plant in Jerusalem things indigenous to other parts of the world because he understood where each channel of energy stemmed from Jerusalem and extended across the globe. Jerusalem below is the physical counterpart of the spiritual energy that flows to the world, creating the perfect harmony between physical and spiritual.

The beautiful people in the Torah were living reflections of harmony between the physical world and the spiritual. Joseph, for example, was so handsome that the local women would climb the walls just to get a glimpse of him. Instead of letting physical pleasure dominate him, Joseph stood up to the test when tempted by Potiphar's wife, and did not let his physical beauty sever him from the real harmony of living a spiritual life. Our ancestors described as beautiful were individuals whose physical attractiveness lived in perfect harmony with their spiritual essence.

The Greeks traded real harmony between heaven and earth for the cheap harmony between different aspects of the physical world. In fact, it is often physical beauty and temptation that stands in the way of one's access to real harmony. The Greeks abused beauty because they flaunted something that was only externally beautiful and ignored the pursuit of genuine harmony. From their perspective, only things that man can perceive and understand exist, and harmony with something transcendental would be impossible.

The rabbis immediately spotted the threat in Greek culture, and fought against replacing real beauty with a superficial imposter. In turn, the Greeks eventually realized the threat that the Jews posed to their own philosophy and how our idea of beauty makes theirs meaningless. They therefore went on the offensive.

The temptation prevails to this day, and the lure of all that appears pleasing, especially during the commercial "holiday season," is overwhelming. Chanukah calls to us, asking us to seek real beauty, the harmony that can only come from connection to a higher realm.

How Is Suffering Fair?

Matzah: Running Out of Time

World of Love #7 - The Possibility of Evil

Torah with Morrie 11: Learn How to Die; Learn How to Live
It Takes A Lot Of Faith To Be An Atheist
How Instagram Brought Back This Nostalgic Soup
What Makes Eli Run?
Comments
MOST POPULAR IN Spirituality
Our privacy policy