Wheel of Fortune: A Purim Story 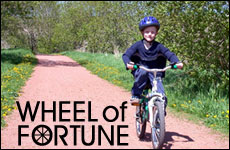 Sometimes things that seem bad are really God's hidden ways of giving us something good.

A big lesson of Purim is that sometimes things that seem bad are really God's hidden ways of giving us something good. In the Megilla, the Purim story, things looked really bad for the Jewish people. Haman, a terrible anti-Semite becomes the king's prime minister and plans to kill the Jews. Then Esther is forced to leave her home and marry the disgusting and wicked king. But as the story unfolds we see how all these things were really parts of God's hidden plan to bring us great good.

We each have our own private 'Purim stories' going on in our lives and can take heart that even when things look dark, God is really giving us hidden good. In the following story, a kid goes on a 'Purim trip', but not the kind he planned.

I felt the thud, thud, thud of the flat tire, and I couldn't believe it. How many things could possibly go wrong for one person in one day? I got down off my bike, whipped the spare inner tube I always carry out of my pack, and got to work. I was upset but not really surprised, because it had just been one of those of days, you know the kind when you get up on the wrong side of the bed and you never find your way back.

Actually the day started out really good. I got a call from a couple of buddies and we made up to go into the city and catch the big high-tech expo at the science museum. It was supposed to be amazing. Mr. Shapiro was going to drive us all in his van. The only catch was that we all had to meet at Sam's house because his father didn't want to make a hundred stops, and they were leaving exactly at 2:00 whether we there or not.

No big deal, I thought. My dad's really cool about these things and I was sure he wouldn't mind driving me across town to where Sam lived.

Well that was my first mistake. My father felt really bad, but he had an important meeting already lined up then and wasn't going to be home.

It was a problem, but not so bad, since I still had plenty of time to get there by bike. But even that didn't turn out to be as simple as I thought because while my bike was securely locked to the lamp post in front of my house, I had no idea where I had left the key!

I finally found the key -- in my kid sister's dollhouse of all places! I was late and had to hurry, but I'm in good shape, so it was doable.

I kissed my mom goodbye and took off down the road that would get me straight there the fastest way. The only problem was the road was closed! Just my luck, just that day, they decided to repaint the stripe running down the middle of the road for the first time in years. I was mad, but when the big traffic cop pointed me to take the detour I wasn't about to argue.

It was 1:45 pm, and making it to the van on time was becoming a real long shot. I sped as fast as I could along the winding, bumpy, detour road. Maybe I'd make it after all, I thought. That moment I got the flat.

Well between my old leaky hand pump, and the rusty wheel rim, changing the tire took me almost an hour! It was all over. No way would Sam and the gang still be there. I turned around and started riding home -- what else was there to do? Everything was just plain going wrong!

I got back to my street and could see my house. Hey, why was my dad's car back in the driveway -- what happened to his meeting? -- and why were he and my mom were rushing out of the house like that?

Then my mom saw me coming, and she and my dad started running fast my way. "Mark! Mark! I can't believe it. Are you really all right?"

I didn't get it. How did they hear about my flat tire? Mom looked like she'd been crying. I mean I was pretty disappointed about it myself, but it wasn't SO bad. I tried to calm her down.

"It's okay mom, I just got a flat and missed my ride. It's just a little bad luck…"

She looked at my dad and gave me a big hug. "Bad luck?" my father said. "Mark, do you know what happened?"

I shook my head.

My mother spoke slowly. "Mark, the van got into an accident."

"Your friends were pretty shaken up, but thank God they'll be okay. Everyone else's parents had heard from their kids already, but when I didn't hear from you, I…I didn't know what to think. So your father rushed home from his meeting and we were just on our way to the hospital to look for you. But now I see we've had a miracle!"

Wow. I was too blown away to even speak. The whole time, all the 'bad luck' I was having was really just God's way of keeping me out of the accident! You can bet I'm going to pay extra attention when they read the Purim story this year. After all, how many people get to live out the story first hand?

Q. How did Mark feel at first when he missed the van ride?
A. He was upset and thought everything had gone wrong.

Q. How did he feel in the end?
A. He felt grateful when he saw how what he had thought was bad luck was really God making him miss the ride so he wouldn't be in the accident.

Q. What do you think Mark learned from what happened that day?
A. As he was trying to meet up with his friends and ran into so many obstacles he had viewed what was happening as something negative. He learned that negative things can really turn out for the good and saw how God was taking care of him and helping him live out his own private Purim miracle.

Q. Should we ever get upset when things go wrong?
A. Although it's hard not to, we should at least try to also remember that deep down what's happening is just a Purim story with a happy ending that some day in some way we'll be able to see.

Ages ten and up

Q. Which kind of a miracle do you think is greater, one that is obvious to see or one that is disguised to look like coincidence or 'luck'?
A. The first kind is certainly more dramatic, but really the hidden sort of miracle is even deeper, because when we have one we can use it to remind us that God is with us in our everyday lives and become inspired to be better and more spiritual people.

Q. Even though Mark was saved from the accident, his friends were not. Why didn't something good happen to them too?
A. Sometimes the good in the events of people's live is not readily apparent. In the case of Mark's friends, the good was hidden even deeper than it was with him. Perhaps something even worse would have happened to them later if God hadn't let them get into the minor accident, or perhaps the experience will lead them to make big positive changes in their lives. We can never know for sure what, or why but we can trust and know that nothing falls outside of God's custom-made plan for each of us, and everything will ultimately turn out to be for our eternal good.

For Kids: Make Your Own Purim Grogger

Dr. Mitzvah - Purim
Why the Mezuzah is Placed on a Slant
Faith: the Axis Upon Which the Wheel of Science Turns
Love - Not Just About Chemicals Anymore!
Comments
MOST POPULAR IN Purim
Our privacy policy