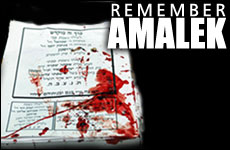 A lesson on Divine Providence in memory of the fallen Torah students of Mercaz HaRav, hy"d.

I was in my rabbinical class finishing the evening prayers as the sounds of automatic gunfire rang out through the Yeshiva. We were in the classroom above the Library which turned out to be the killer's target. As we lay on the floor, bracing furniture against the doors, we could only imagine the horror he was wreaking in the rest of the Yeshiva. We were unarmed and could only wait and pray that help arrive as soon as possible. We called the police, but it was only thanks to a man named Dadon and an off-duty officer named Shapira who neutralized the killer. When the security forces finally arrived, they searched the building and found us sitting on the floor in the dark.

As they whisked us out of the building, we gained a first hand glimpse of the horror the killer had wrought. We were spared only because we were delayed in finding a tenth man to make our minyan. Had we finished praying one minute earlier we would have found ourselves in the path of the killer.

As I was driven home by my daughters, the gnawing question of why bad things happen to good people was now magnified by the fact that murder was perpetrated against young Torah students learning Torah in a Torah Academy. I offer this essay as an attempt to come to grips with this dilemma.

"The Torah is a tree of life to those who grasp hold of it." And yet eight Torah students, learning Torah in a Torah Academy, were mercilessly gunned down by a raging beast called Amalek.

How can we reconcile the special Divine providence extended to those "grasping hold" the Torah, with the bloody reality to which we bear painful witness? The answer lies in the date of the attack: Rosh Chodesh Adar.

Rosh Chodesh is a time of joy in that the new moon symbolizes renewal and rejuvenation. Yet it is also a time when the moon is not visible, and consequently, is a time of darkness symbolizing evil.

Adar is a month of great joy for we celebrate the victory of good over evil. Yet it is also a month of fasting over the evil designs of Amalek. Indeed it is in this month that we remember Amalek by reading the "zachor" Torah portion. We remember that "God's war against Amalek is from generation to generation."

The ability to exercise a choice between good and evil demands the existence of evil and by extension, people who purvey that evil.

Rabbi Shimshon Raphael Hirsch explains that the battle against Amalek is really a battle over whether Man will obey God or the dictates of his own rationale. Man expresses his freewill by deciding to act either according to his own definitions of right and wrong, which devolve to his own "might and power," or according to God's definition of morality.

The ability to exercise a choice between good and evil demands the existence of evil and by extension, people who purvey that evil. Those people are known as Amalek. And though Amalek was a specific people, the verse commanding their destruction states: "blot out the memory of Amalek". Consequently, Hirsch explains that the memory of Amalek, of people who glorify the sword, must be blotted out. For as long as their memory is glorified others will follow the path of evil and reject the path of morality.

Although evil, necessary for freewill, is part and parcel of Creation, it is seemingly nevertheless a stain on a loving God who wants only good for his creations. So much so that God, as it were, offers a "sin offering" as atonement on none other than Rosh Chodesh, when light is diminished and evil reigns supreme. God can do little more than offer a sacrifice in atonement, lest he remove from Man the very task He entrusted to him: to be a partner in creation, to complete creation, through his own efforts.

Nowhere is this paradigm of existence more pronounced than in the story of Ester read on Purim. The Megilla tells of Amalek's plan to annihilate Israel where he obtains the King's seal on a decree to that end. The Jews fast and pray that Esther's efforts to annul the decree succeed. However they are told, "The decree of the King cannot be annulled." Since when can't a king issue an annulment?! The answer is that this refers to not just any king, but the King of Kings. The decree that cannot be annulled is God's decree of Creation, the decree of freewill, the decree that evil must have free reign.

The Jews obtained only the permission to fight back -- this was God's answer to their fasting and prayers.

The Jews obtained only the permission to fight back -- this was God's answer to their fasting and prayers. And as they fought evil, so too must we. Real evil will not go away with appeasement and peace negotiations.

The Megilla ends with the celebration of the victory of the Jews. We rejoice however, not at our own strength, realizing that victory would be for naught without God's hidden help. Indeed it is this knowledge, that God works behind the scenes to guarantee our success, which is the source of our joy.

It is only the guaranteed assistance of the Creator that can explain Israel's continued existence in the face of evil perpetrated by the Amaleks of the world. But that guarantee extends only to the nation as a whole and not to individuals. No individual can confidently assume a protected existence - not even a Torah scholar, learning Torah, in a Torah academy.

So what of the promise that "grasping" the Torah offers special Divine providence? Perhaps, though the Torah does provide a path to righteousness and life in general, there are times that are beyond man's comprehension. At such times we must lament: "Difficult is the death of the righteous in the eyes of God."

As such, the Zohar provides a succinct theological response in the form of prudent advice: "A man should not confidently affirm - God will deliver me or will do for me this or that - but rather he should endeavor to fulfill the precepts, walk the path of truth, and put trust in Him that He will help."

The victory of this fight is embodied in the Holy Temple, symbolizing God's dwelling amongst mankind upon acceptance of His will. In the Megilla, Haman sought to derail the building of the Temple. Today, Amalek attacked our small Holy Temple, the Yeshiva, center of Torah learning, whose purpose is to bring God's will, God's peace, to mankind.

And so it was on Rosh Chodesh Adar, a time of good mixed with evil, that our rejoicing was mixed with tears. We cry bitterly over the loss of our holy Torah students at the hands of Amalek. But we rejoice in the Divine promise that no matter what designs the evil Amaleks of the world will conspire, they will never destroy the nation of Israel. In the words of Haftarat Zachor: "Netzah Yisrael Lo Yishaker" -- The eternity of the people of Israel is guaranteed by God.

Rabbi Mois Navon is a Computer Engineer and received semicha through the Mercaz Harav Yeshiva's Rabbi Aharon Soloveitchik Semicha Program. His writings can be accessed at www.divreinavon.com

Now You See God, Now You Don't
In the Shadow of David and Goliath
Where Do the Laws of Nature Come From?
Saadiah Gaon, Rashi and Maimonides: How Three Rabbis Revolutionized Judaism
Comments