Judaism and the Environment 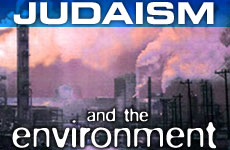 Judaism has a balanced and reasoned approach to environmental issues that could be a source of pride to Jews and a source of inspiration to the non-Jewish world.

As a boy of six I was walking to shul with my father one morning and I unthinkingly tore some leaves off the hedge we were passing. In disapproval my father told me the Chassidic tale of Rabbi Yosef Yitzchak of Lubavitch. As a young boy he carelessly ripped a leaf of a tree and was told by his father that God had his intention for that leaf and he was not to damage it unnecessarily.

The Torah proscribes wanton destruction even at a time of war (Deut. 20:19). Rabbi Aaron Halevi of Barcelona writes, This is the way of the devout and those who seek good deeds… they never destroy even a grain of mustard, and are upset at any destruction they see, (Sefer haChinuch, 529).

Scriptural writings are full of natural imagery and are steeped in respect for nature, while biblical and later rabbinic law provide comprehensive legislation on issues such as conservation, animal welfare, species preservation, sanitation and pollution.

The Torah orders the creation of green belts around cities (Numbers 35:4), and the laws against grafting diverse seeds and cross breeding animal species (Leviticus 19:19) can be understood in modern terms as concern for biodiversity. Shabbat is a weekly rest for humans, animals and the natural world. We are called upon in Jewish law to offer blessings for all manner of natural phenomena (rainbow, lightning, shooting stars, the first blossoms of a tree, etc.). A most dramatic ecological gesture is Shemita, the seventh year rest for the environment, when all fields lie fallow. Maimonides declares that meditating on nature is one of the key ways a person can fulfil the commandment to love God with all your heart… (Mishne Torah, Yesodei Hatorah 2:2)

There are dozens of exhortation in rabbinic writings to learn self-improvement from natural phenomena and non-human life. Cruelty to animals is repeatedly prohibited in the Torah and the Talmud and later codes -- and is considered one of the seven Noahide Laws incumbent on all humankind. Hunting is seriously frowned upon in Judaism, while sensitivity to animals is a frequent motif in Talmudic and Chassidic literature.

Justice and fairness, especially towards those vulnerable, is a theme running through scripture. Every seven years all debt would be cancelled -- an interesting model for the issue of Third World debt in our era.

Two thousand years ago the Talmud (particularly Baba Batra chap.2) extensively covers the regulation against atmospheric, water and even noise pollution, and arising from Deuteronomy (23:12) issues of waste disposal.

We may therefore ask why Judaism, which comes with first-class environmental credentials, appears in many instances to be lagging behind in ecological consciousness.

At conferences and in rabbi's sermons environmental issues are rarely on the agenda. While most Jewish people I have spoken to understand the problem of Third World debt and appreciate the fundamentals of fair trading, there doesn't seem to be a clear, never mind vocal, Jewish response on the issue.

A moral consciousness based on Torah values would surely see merit in the argument for ethical investments, to ensure that monies are not invested in companies that use child labour, create environmental degradation or are socially irresponsible. After all, Justice, justice you shall pursue (Deut. 16:20).

While Judaism does not endorse animal 'rights' it comprehensively legislates for animal welfare. While we need to vigorously combat any efforts to ban shechita, ritual slaughtering of animals, we also need consider the moral legitimacy of intensive farming practices. If shechita, as the Rambam and other leading authorities insist, is legislated out of compassion to animals, doesn't that raise a question of battery-farmed chickens? And shouldn't that afford rabbis a clearer line on the undesirability of the fur trade in our fair climates, now that its cruel practices are public knowledge.

The basics of environmentalism are Torah law. Psalms declares, To the Lord belongs the Earth and all it contains (24:1). Yet it is not often that I am informed by a Jewish organisation of their environmental policy. So says a Midrash: When a fruit-bearing tree is chopped down, a voice is heard from one end of the world to the other but it is not audible (Pirkei D'Rabbi Elazar, 34). Should this not make us conscious of undue waste of paper products and other natural resources that are being rapidly depleted?

As a rabbi I feel guilty for not doing more to present an authentically Jewish perspective on matters such as reforestation, recycling or globalisation. In a raft of 'Green' issues Judaism has a balanced and reasoned approach that could be a source of pride to Jews and a source of inspiration to the non-Jewish world. More importantly, it could lead to positive action.

I think part of the reason is that in the minds of many people environmentalism has been hijacked by 'eco-fascists' such as Earth First! vigilantes who absurdly endanger human life in furthering natural life (Joni Seager, Earth Follies). Animal welfare is discredited in the eyes of many Jews for its hostility to shechita, denying basic human rights even as it champions those of animals. But these objections, while correct in my view, don't delegitimise the fundamental morality of environmental responsibility and compassion towards animals respectively.

Rabbi's can raise the issue in sermons, communal organisation could adopt environmentally friendly policies, Jewish charities can invest ethically and individual Jews can buy with a social and ecological conscience. These things, among others, would make a difference.

Judaism, with its rich heritage and history of respect for nature and non-human life, is in a perfect position to articulate a better-adjusted and more balanced environmental ethic. It would be in keeping with our tradition to do so. We would be tuning a blind eye to our own values if we choose to say 'not my problem'.

This article is published as part of a Tu b'Shvat Learning Campaign, coordinated by Canfei Nesharim ( on the wings of eagles ).

Rabbi Ives is the rabbi of the Richmond Synagogue in London. His Hebrew work on mysticism, called Seder Hishtalshelut (Chain of Creation) in being published in Israel, after which he will begin work on an English edition. He is also in the process of writing a book on social issues titled The Price We Paid, which addresses the “social dimension” to environmental concern.

The Relevance of Tu B’Shvat: Towards a More Fruity Existence

From Stagnation to Liberation

A Renewable Light Unto the Nations

View from the Trees