These Lights We Kindle 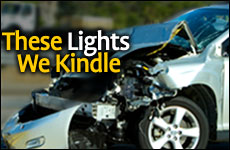 I was at work when the call came in. "Mr. Busch?" a stranger's voice inquired in a tone that made me tremble.

Please God. No! This can't be happening, I silently pled, recalling a similar call from several years before, when my son Ben died in a traffic accident.

"Yes, this is Mr. Busch," I acknowledged reluctantly.

"My name is Ann and I have just left your daughter Kimberly," she said calmly.

"Kimberly! Is she alright? Is she hurt? Tell me where she is!" I nearly panicked.

"Mr. Busch, she is fine. Really! We're about an hour south of Chicago at mile marker 80'. Kimberly was involved in an accident, but she isn't hurt, not a scratch."

"Kimmy in an accident! Not hurt! Thank God!"

"Yes, that's right. She's fine. I've already left the scene, but I promised her I'd call you as soon as the police arrived."

Two hours earlier Ann pulled off the interstate to help out after she had witnessed a collision on her way to Chicago. That's how she ran across my daughter Kimberly whom, we later learned, had lost control of her steering wheel while trying to pass a truck when its driver unexpectedly shifted into the passing lane. She was forced onto the shoulder and across the grassy median into oncoming traffic, whereupon she struck a van.

"Listen Ann, thank you from the bottom of my heart. You can't imagine how much your news means to me."

I immediately called Kimberly's mother. "Jan, hi. It's Alan. Sorry to call at work but it's urgent," I said with as much calm as I could feign.

"What is it?" she asked haltingly.

"Kimmy's been in an accident, but she's fine, completely unhurt," I hastened to emphasize.

"Kimmy! What? An accident? No, not Kimmy!" she cried out, her voice choked with emotion.

"Listen hon," I interrupted, addressing her with an old term of endearment. "Kimberly is safe and not hurt. She'll tell you everything later. I'm leaving to get her right now. Talk later," I said, gathering my things and running out.

IN THE DRIVER'S SEAT

I found Kimberly waiting for me in front of the service station that had towed her car. She was anxious to leave immediately, but I needed a few minutes to wrap my head around this. I walked over to Kimmy's car. The entire front end looked like an accordion. The collision crushed the front end of the car within several inches of the dashboard. I grasped hold of the driver's side door. To my amazement, it opened cleanly.

I sat in the driver's seat, gaping incredulously at the place where my daughter could have died that day.

I sat in the driver's seat and put both hands on the steering wheel. I slumped down, nearly in tears, gaping incredulously at the place where my daughter could have died that day.

"Dad, are you ready?" Kimmy asked with the slightest bit of impatience. For her, the moment was something from which she wanted to flee.

For me it was the scene of the reenactment of my son Ben's fatal injuries in a car crash several years before. I "saw" Ben's unresponsive body lying atop the surgical table.

"Yes sweety," I replied, struggling as best I could to avoid an emotional breakdown in front of my daughter. I was overwhelmed.

We drove home mostly in silence. Kimmy was understandably skittish, gasping every time I braked or switched lanes.

I dropped her off at her mom's house. I wanted to have more time with her, but I knew her mom anxiously awaited her arrival. My heart sank but here she was ... safe and sound.

Why was Kimberly saved? I can't answer that question any better now than I could before when I wondered why Ben had not been.

The following Friday, Kimmy came over for dinner. My younger son Zac was there too as was my fiance. A beautifully set table awaited us, its candles aglow for each of my three children. We gathered around the table.

"Kimushkele," I turned to my daughter, my voice cracking as I tried to articulate the words of a short speech.

"Yes Dad," she responded laughingly while drying a few tears.

"This Shabbat is extra special. I am so thankful to have you by my side."

I lifted the kiddush cup. A slight tremble animated my right hand. I let a moment pass during which not a peep was uttered. Ben's candles seemed to flicker more brightly at that instant, illuminating the serpentine path of a single drop of wine running down my hand.

As I chanted the blessing over the wine, I thought back to that moment sitting in the driver's seat of my daughter's car and realized that a great miracle had happened there.

My Mom
Don’t Believe in Other Gods Versus God is One
Seeing Without Eyes
Why Shouldn’t We Eat Whatever We Want?
Comments
MOST POPULAR IN Family
Our privacy policy
Aish.com Is Looking for Great Writers