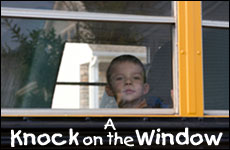 Sometimes it's the small gestures that penetrate most deeply.

My eleven-year-old daughter, Chassia, who has Down's Syndrome, was accepted to new school for special children. Our family was thrilled that she was to have this opportunity to learn in a classroom like other "normal" children, and the school was a convenient short bus ride from our home.

On the first day of school, I stood with Chassia and my anxious thoughts, waiting for her bus to arrive. While I was grateful she had this tremendous opportunity, I was also nervous and afraid. Would she make friends? Would she be able to keep up with the rest of the class? Will the teacher understand her needs and help her through her frustrations? How can they possibly know just how precious my daughter is?

Knowing that all beginnings are difficult, I turned my worries into prayers that Chassia's transition would be an easy one.

The bus was late, and the extra time gave me a treasured few more minutes with her. Finally, the shiny 12-seater van pulled up at the curb. Chassia, her younger sister Avigail who had joined me for the send off, and I were drawn to the row of faces inquisitively returning our studying looks through the large bus windows.

There was an air of excitement among the children who were peering to see what action this new addition and her attending escorts would bring. Only one boy, sitting up front next to the driver by the door, didn't bother looking up at all. His head bent and eyes cast towards the floor, he sucked purposefully on his thumb. I gave a playful knock on his window, ready with a smile, but he kept his pose and did not look up towards my waiting grin.

As the van pulled away from the curb and traveled down the long steep hill, Avigail and I called out, "Goodbye, Chassia!" waving enthusiastically. I continued smiling and waving until the van disappeared around a bend. I wondered if she even saw me bravely smiling through my tears.

How long can a person persist in doing something that doesn't evoke the desired result? By now, my friendly rap on the window of the boy sucking his thumb had become a daily ritual, although he never once raised his head in notice. And every morning I made it my custom to wave goodbye to Chassia until her van moved out of sight. She rarely turned her head to see me, yet I did it just the same, just in case. Because when she did occasionally glance back and see me still standing at the curb smiling and waving, oh, how happy she looked! Adding just a little more joy to the day of a special child makes an immeasurable difference in her life (how true in anybody's life).

Suddenly I heard an urgent knocking on the glass. I looked up to see the boy in the window.

One Spring morning, a different vehicle pulled up to the curb and took us by surprise. It was an older model, a little battered. The rusty van door opened slowly and the friendly attendant smiled at Chassia, directing her to a seat farther back from her usual spot. The aisle was narrower than the other bus and it was difficult for Chassia to maneuver with her knapsack between the close rows. After helping to wedge her into her new seat, I carefully stepped back out of the van. In that moment I realized I had missed my few seconds with Mr. Sad-Faced-Thumb-in-the-Mouth.

Standing there on the sidewalk, waiting to perform my routine send off, I suddenly heard an urgent knocking on the glass. I looked up to see the boy in the window -- yes it was him! -- waving vigorously at me, an intense look of recognition upon his face.

It had taken many months, but I finally knew I had forged a connection. The reward was long in coming, and it was worth every second.

Chaya Malka Abramson is a dedicated wife and mother of 10, the author of Who By Fire (Feldheim), inspirational speaker, and founder of the Chaya Malka Burn Foundation raising funds for burn victims. She lives with her family in Jerusalem on Mount Zion, just outside the Old City walls. Contact her at chayamalka18@gmail.com.

Summer In the City