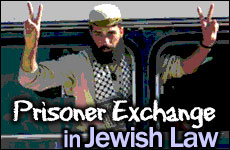 The State of Israel is faced with a difficult dilemma: To release terrorist prisoners in exchange for captive soldiers, or not. What does Jewish Law have to say?

The Sages of the Mishna teach: "Captives should not be ransomed for more than their value, for the sake of the general welfare." The enactment of such a law was necessary, lest kidnapping become a lucrative trade. The Rif (Rabbi Yitzhak Alfasi), the Rambam (Rabbi Moshe ben Maimon), the Rosh (Rabbi Asher ben Yechiel), and the Tur (Rabbi Jacob ben Asher) all rule accordingly, as does Rabbi Yosef Karo in his authoritative Shulchan Arukh (see Yoreh Deah 252:4).

Yet, regarding a situation in which the life of the prisoner is at stake - i.e., his captors threaten to murder him if they do not receive the ransom they desire -- Torah authorities are divided: Some say that it is permissible under such circumstances to pay more than the captive's value, because a Jewish life is at stake; others, though, maintain that such a deal is forbidden out of consideration for the general good, for if an agreement is reached, the terrorists will simply step up their efforts to take additional captives.

The Maharam of Rothenburg

Rabbi Meir of Rothenburg (1215-1293 c.e.), known as the Maharam, was one of the greatest of the early Jewish codifiers. At the age of seventy he was taken captive and placed in the Ensisheim prison in Alsace, France. Emperor Rudolf I proceeded to demand an exorbitant sum for his release.

In order to understand the full significance of this act it is important to realize that almost all of the rabbis and leaders of the Jewish communities in that generation were the Maharam's students. Even the great rabbis of the generation that followed were greatly influenced by the teachings of the Maharam. The most famous of his students was Rabbi Asher ben Yechiel, known as the Rosh, whose rulings are cited extensively in Rabbi Yosef Karo's Shulchan Arukh. Because the Maharam was such an important a figure, Emperor Rudolf I hoped to extort a huge ransom from the Jewish community. Indeed, the emperor's evil scheme nearly succeeded. The Maharam's students and admirers were prepared to raise the sum necessary to free their master. They felt that though the law forbids paying more for a captive than the accustomed amount, when the captive at hand is the leading Torah scholar of the generation, and the entire community is in need of him and his Torah wisdom, it is permissible to pay any fee.

The Maharam succeeded in preventing a dam from breaking open.

But the renowned Maharam would not permit it to be paid, for he understood that such an act would only encourage the enemies of Israel to imprison other rabbis in the future and demand huge sums for their release. As a result, Rabbi Meir of Rothenburg spent the final seven years of his life in the Ensisheim prison -- and it was there that he died.

By virtue of his greatness of spirit and his self-sacrifice for the sake of the general good, the Maharam succeeded in preventing a dam from breaking open: He saved the Torah leaders of future generations from captivity, and the Jewish community from gigantic expenses which may well have caused their complete financial ruin.

The Law Regarding Prisoners in Wartime

Although, as we have said, there are opinions that when the captive's life is at stake it is permissible to pay even more than the generally accepted amount, in wartime it is forbidden to give in to any such extortion whatsoever. The rule is that in times of war one does not submit to any of the enemies' demands. In fact, even in a case when the enemy only stole some straw and hey from a border village, the response must be a strong military one. For, as soon as one gives in to them regarding a small matter, they will gain confidence and increase their efforts to strike at us (see Eruvin 45a).

Therefore, if an enemy of Israel takes even a single hostage, we must go to battle against them in order to save the captive, for if we allow them to succeed in taking one hostage they will gain incentive and step up their efforts to strike at us. To this effect we find in the Torah (Numbers 21:1): "And when the Canaanite King of Arad, who lived in the Negev, heard that the Israelites were traveling along the Atharim Highway, he attacked them and took some captives." According to the Sages, they took only a single maidservant. Yet, in order to save her, Israel did not suggest negotiations, but went to battle against the Canaanites. An additional example can be brought from King David: When the Amalekites attacked the town of Ziklag, taking the women captive, King David did not sit down at the negotiating table, but went to war against them and saved the prisoners (Samuel 1:30).

In a case where Israel lacks the military capacity to engage the enemy in battle it is permissible to exchange prisoners in the generally accepted fashion, but any more than that is forbidden. This is all the more true considering that today, we are in an ongoing state of war with surrounding countries and terrorist organizations, and that every concession is interpreted by them as a sign of weakness. Such submission merely leads to more attacks and more attempts to take hostages.

As a result of our receiving one Israeli hostage, scores of other innocent Israelis have been murdered.

What's more, as a result of our willingness to free large numbers of prisoners for one or two Israeli hostages, the terrorists fear us less, for they figure that even if they do get caught, they most likely will be freed eventually in a prisoner exchange deal. It should also be noted that many of the terrorists who have been released by Israel in the past simply returned to their terrorist activities, murdering more Israelis. Therefore, as a result of our receiving one Israeli hostage, scores of other innocent Israelis have been murdered.

It is important to realize, though, that at the end of the war, when a final cease-fire agreement is reached between the sides, it is permissible for Israel to release all of the enemy prisoners in its possession in turn for all of our own captives being held by the enemy -- even if we have taken many captives. The reason for this is that such exchanges are recognized as accepted practice at the end of the war and therefore not considered acts of extortion. Unfortunately, though, we do not foresee such an end to war and terrorism arriving anytime in Israel's near future.

May we merit seeing the fulfillment of our Rosh Hashana prayers, that "all wickedness will disappear like smoke when You remove evil's domination from the earth. Then You, God, will reign alone over all Your works, on Mount Zion, the resting place of your glory, and in Jerusalem, Your holy city."

Rabbi Eliezer Melamed is the Dean of Yeshiva Har Bracha and a prolific author on Jewish Law. Parts of this article were translated from his popular series "Pininei Halacha." His book "The Laws of Prayer" is due to be published in English by Sukkot. This article also appears at the web-site Yeshiva.org.il

Things Life Has Taught Me About Judaism