The Jewish Ethicist: Charity from the Poor 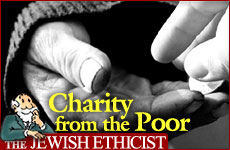 How much do the poor have to help the poor?

Q. Our family lives on a very tight budget, but we are managing without any outside assistance. Are we obligated to give charity from our meager income?

A. Giving charity is one of the most important commandments. The Torah expounds on the great blessing that accrues to one who is generous in this mitzvah (Deuteronomy 15:10):

Surely give him, and don't let your heart be grieved when you give to him, for because of this thing the Lord your God will bless you in all your deeds, and in all you set out to do.

Normally, a person should give at least ten percent of his income (after tax) to charity. This practice is called maser kesafim, a tithe of money, and is analogous to the agricultural tithes that were given by Biblical command from produce in the land of Israel.

Mar Zutra stated, even a poor person who is supported by charity must [himself] give charity. (1)

The Talmud then goes on to say that even for a charity recipient, giving charity to others can help rescue him from poverty.

However, a poor person does not give ten percent of his income, but rather a token amount. Regarding larger donations, the great early sage Rav Saadiah Gaon wrote, "A person must give precedence to his own support before that of others, and he is not obligated to give charity until he has enough to support himself, as it is written, "Let your [needy] brother live with you" – your life precedes the life of your brother. (2)

Exactly what is the poverty line? In the time of the Talmud, it was considered that a person could subsist for a year on an income of 50 zuz (an ancient coin). Therefore, someone who had a regular income at this level was not eligible for public support. But Rabbi Yaakov ben Asher, a 14th century authority, commented that this figure itself included other forms of public support besides charity, including agricultural gifts. He adds:

Nowadays, when we don't have all this, a person is eligible to accept [charity] until he has sufficient resources to support himself from his income. . . We see that everything is according to the situation. In those days perhaps the cost of living was very low and perhaps it was possible to live comfortably on an income of fifty zuz, but nowadays it is impossible. And everything is according to the place and the time. (3)

The amount of income needed to be able to qualify for some degree of public support nowadays is far above what was considered "subsistence" level a generation ago. For example, years ago a washing machine was a luxury, but today it is a necessity -- there are virtually no Laundromats left.

So if you are at or below the level where you are obtaining or at any rate eligible for means-tested assistance, then you should be giving a token amount to charity. If you are making more than that, then you should strive to give ten percent to those needier than you, as long of course as this does not drive you back below the modern-day subsistence level.

Even if you find that you are exempt from giving a substantial amount of charity because of your limited means, you should still give a token amount in order to remain in the habit of helping others.

The Jewish Ethicist - Snitching to the IRS
The Softball Player
How This 6 Generation Bread Baker Brought Back Israel’s Ancient Grains
Olivia Newton John’s Grandfather was a Nobel-Prize Winning Jewish Physicist
Comments
MOST POPULAR IN Current Issues
Our privacy policy
Aish.com Is Looking for Great Writers