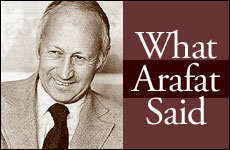 Was it only in my imagination that I was smarter than my father?

It was 1982 and I was in the backseat of my parents' rented car. As my father, Saturday Review editor Norman Cousins, wedged his way into the left-hand lane turning onto Sderot Herzl, my mother, in the passenger seat up front, turned around to confide in a low voice: "And you know what Arafat said?"

My parents' visit to Israel, as usual, was doubling for my father as a diplomatic mission of which he would speak only vaguely, if at all. It must have been my dark dread of whatever my mother was about to report, and the bitter cynicism which had already seized me, and my instinctive wish to escape, which at that moment drew my eyes sharply out the window. As a result, the conversation which was about to take place is saved in my visual data base as a rush-hour traffic jam on the Jerusalem-Tel Aviv Highway: three long lines of honking cars stretching away into the distance under a pinkly glowing sunset. The pale, ancient hilltops that encircle Jerusalem were drifting on the horizon, as yet unmarred by the massive construction projects that would soon accommodate the capital's impending population explosion.

The "government" had flown my father by helicopter on a secret midnight mission to meet with Yasser Arafat, somewhere in Lebanon.

My mother had been telling me where Daddy disappeared to so suddenly last night. The "government" -- it stirs me now to realize that this must have been during Yitzchak Rabin's reign -- had flown my father by helicopter on a secret midnight mission to meet with Yasser Arafat, somewhere in Lebanon, in a hidden underground bunker. The goal, she explained, was to convince Arafat that a cessation of terrorist incursions into Israel would be in his own best interest.

"Fat chance!" I muttered, thinking acidly: Arafat doesn't care what's in his own best interest. Or his people's interest. What interests him is killing Jews. Here we were just a few lines into her story, and my bloodstream was already circulating the old, peculiar potion which always shot through me at moments like this, when my fervent, hidden pride at being my father's daughter mixed with so many other equally potent, buried emotions. It was my assumption (which I would one day realize was mistaken) that I knew better than my naive, liberal, humanitarian father about the Arab proclivity for deception. To whatever extent possible for any American in that pre-9/11 era, my father understood quite well what he was dealing with, without any help from me. After all, it couldn't have been for no reason that he was trusted by one American President after another to negotiate with one despot after another. But sitting behind him now in the back seat -- unable to see his expression but with a good view of the rising tension in that eloquent jaw-line which I knew so well -- I was swamped by a sense of helplessness: How could I convince Daddy not to innocently project his own good faith and truthfulness onto the cunning murderer with bloody hands, the man whose fondest wish was to destroy us in my newly adopted country?

But there was another emotion, too: the underlying one that had always been there, long before I moved to Israel, long before the instant enlightenment later afforded me by his fatal heart attack at the age of seventy-five...The simple love of a daughter, and reverence, for a father as sweet, kind, and wise, as you could ever hope to find.

The vivid mental movie I retain from my mother's account – there's no way, anymore, to check its veracity -- goes like this:

My father is whisked dramatically under cover of darkness to Arafat's secret hideaway. With one heavily armed, mustachioed, keffiyahed guard at his rear, and another heavily armed, mustachioed, keffiyahed guard ahead of him, leading the way, my father steps cautiously along a dark underground tunnel. One electronically operated door after another opens, then clicks shut behind them, as they continue making their descent. These guards pass him to others, who in turn pass him on to others – all of them gliding like shadows from one dark chamber into another, in sinister Arab fashion. An opening... the dank cave air...and then, bingo! The brute himself, seated behind what I visualized as a large desk not unlike the one in my father's UCLA office. The primitive stone walls are flickering roughly in the candlelight, throwing up shadows. (This last embellishment must be culled from all the publicity surrounding Arafat's candlelit sojourn in Ramallah some years back, when he was under siege by the Israeli Army and they cut his electricity.)

Daddy and Arafat discuss whatever they're supposed to discuss, then Daddy changes course, to ask the question he puts often to those with whom he conducts negotiations. "Who are your heroes, Chairman Arafat?"

"And you know what Arafat said?" said my mother.

"He told Daddy that his hero is Abraham Lincoln."

I had an impulse to smash through the window or at least leap out into traffic, but there was a little child on either side, and an infant in my arms. "Abraham Lincoln!"

No answer from up front.

"Daddy!" I felt like screaming. Maybe I was. "You don't believe that, do you? That's ridiculous!"

"Abraham Lincoln! You must be kidding!"

Could I have said, innocent American? Or something worse, such as, stupi-- ...

Let it not have been...something worse.

My father -- his profile only partly visible from where I sit, who has uttered not a word -- is staring determinedly ahead at the road, gripping the steering wheel, his knuckles white with pressure. My mother, too, now, is facing front, abashed, realizing her mistake.

"Ha! What a joke! Abraham Lincoln! He's just smart, Daddy! The liar! He just knows what you want to hear! You don't believe it, Daddy, do you?"

I recall that jaw-line, clenched now with frustration, and the lips shut tight. Could it be only in my fearful imagination that I was smarter than he? He had secrets he was bound to keep, which he did, until the day he died.

He turned abruptly into the Hilton parking lot.

"What Arafat Said" is an excerpt from a story in Sarah Shapiro's book "Wish I Were Here" [Shaar Press/Artscroll]
Like What You Read?  Give Jews around the world the chance to experience engaging Jewish wisdom with more articles and videos on Aish. It would make your mother so proud and as a nonprofit organization it's your support that keeps us going. Thanks a ton!

Me, A Zaidy?
Olivia Newton John’s Grandfather was a Nobel-Prize Winning Jewish Physicist
Don’t Believe in Other Gods Versus God is One
Seeing Without Eyes
Comments
MOST POPULAR IN Family
Our privacy policy
Aish.com Is Looking for Great Writers