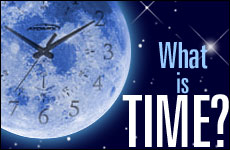 As spiritual beings, we are responsible for actualizing the potential holiness that God imbues in each moment.

We measure time's passage by hours, days, months, and years, but what is the elusive reality that we are measuring? A physicist would answer that time is the way that we measure the rotations and revolutions of the heavenly bodies.

But while the movement of the heavenly bodies is circular, the human sense of time is linear. On the physical level, the earth turns around today just like it turned around yesterday. On the deepest level, however, we know that yesterday should not be just a repetition of today, and this year should not be just a repetition of last year. We understand intuitively that our lives must move not in circles, but in spirals, with every rotation higher than the preceding one.

We also know that time runs out, and our bodies can endure only a certain number of years before they perish. This subconscious awareness of own mortality also colors our relationship to time and its passage.

Every day and moment has its own gift in terms of its particular constellation of energy.

The Arizal, the almost legendary mystic scholar, pointed out that the rotations and revolutions that physically mark the passage of time have a spiritual parallel. Every year is in terms of its potential, as is every month, every day, every hour.

Thus no two prayers are ever the same. A prayer recited this year can draw down spiritual forces that could not have been drawn down last year, or ever before in history. Every day and moment has its own gift in terms of its particular constellation of energy. We can either utilize that gift or spurn it.

The Hebrew words that describe time's passage reinforce this message. The Hebrew word for "year" is shanah, which shares its root with the word shoni, which means "change." The word for "month" is chodesh which shares its root with the word chadash which means "new." The passage of time is supposed to change us in significant ways. How can we develop a meaningful relationship to time?

Sanctifying time by the ritual called "Rosh Chodesh," the new moon, is the very first commandment that we were given as a nation. This commandment reveals how Judaism relates to time.

Let us first look at the historical background of this mitzvah. On the eve of the Exodus, the Jews in Egypt were ready to begin their lives as a nation. Slavery taught them never to willingly serve an earthly master, nor to let themselves fall into the role of oppressor. They also saw great miracles that revealed to them God's presence, devotion to His people, and ability to change the rules of nature.

Up to that point, the Jews were passengers on a journey not of their own choosing. God was now giving them a commandment that would move them from passivity to active self-definition. They were told to sanctify time.

A fascinating clause in the law is that the new month does not begin until the judges actually proclaim it. For example, if on the 30th day a delay takes place preventing the witnesses from arriving on time or preventing the judges from taking their testimony until nightfall, no matter how many people saw the new moon, the new month will begin on the 31st day and not before.

This is no mere technicality. From the standpoint of Judaism, time is not a mechanical physical reality, defined by the movement of the heavenly bodies. Rather, time is defined by human beings, as declared by the Jewish court. This means that we are going beyond just noticing physical changes in the sky; as spiritual beings we take responsibility for actualizing the potential holiness that God imbues in each moment.

The new moon is a time of spiritual and moral rebirth of our inner selves.

Each time the moon finds the sun again and receives its light once more, something profound takes place. God wants His people (as represented by the witnesses and the court) to find Him again, and to rediscover His light, even though it is often obscured by periods of darkness and spiritual concealment. Therefore the new moon is a time of spiritual and moral rebirth of our inner selves.

The flow of spiritual force that descends each month is called mazal, which literally means, "that which flows." The mazal of the month is actually the conduit through which we can experience God.

Each of the 12 months has an astral sign which maps out its mazal. In ancient times astrologers were able to read the astrological signs the way we read a map today. Obviously the fact that I can pick up a map and find Chicago does not mean that I caused Chicago's existence. In the same sense, astrological information doesn't in any way alter reality. It just maps it out.

An interesting failing in human nature is that we subconsciously confuse our ability to describe things with our ability to control them. Astrology, or knowing the "map" of how mazal alters our lives, can become an obsessive pursuit. The Torah tells us to walk with God in simplicity, and to let time unfold on His terms. We don't practice astrology, fortune telling, or any illusory means of wresting control from God by divining what the future will bring.

The Jewish holidays are "times of meeting" between us, with all of our limitations, and God in His unknowable infinity.

One way to tap the energy of each month is through the celebration of the Jewish holidays. The holidays are not meant to celebrate past events. Rather our awareness of the past informs us about the forces that are at hand for us to use to make our present and future fit God's ever unfolding plan.

There are seven central holidays that are mentioned in the Torah. That means that they are an integral part of God's blueprint of time, mazal, and the world's destiny. In the mystic literature the holidays are described as times of ratzon, which literally means "will." These are days in which God's will, which is usually hidden, can be seen with far more brilliance and luminosity than at any other time.

In the Torah the holidays are referred to as moadim, which means "times of meeting" between us, with all of our limitations, and God in His unknowable infinity. The bridge that we cross to meet God is made by the spirit of the particular time itself, as well as the events that took place in history that give us insight into both the time and the Creator of time.

Each holiday is distinct and irreplaceable. They act as lamps that give us the ability to see far beyond the ebb and flow of existence.