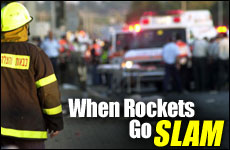 In Israel, nobody expects miracles, but everybody takes them for granted.

ASHKELON, ISRAEL — Setting foot into the southern Israeli coastal city mall hit four days earlier by a Palestinian rocket, the natural expectation was to see ravaged shops and smashed kiosks. There were none.

Stepping out of the elevator into the health clinic on the third floor, however, all around was a tangled mess of plaster, broken tiles, shattered glass and exposed wiring. And this was after four days of nonstop clean-up efforts by more than 20 people.

That no one died in this attack is no ordinary miracle. So many factors coalesced — from the exact location and timing of the impact to one doctor's smoking habit — that even slightly different circumstances could have produced far deadlier results.

Minutes before 6 p.m., as President Bush was meeting with Israeli Prime Minister Ehud Olmert in Jerusalem, a Grad rocket slammed into the mall's roof — roughly 20 feet away from where an obstetrician was examining her patient. The roof instantly came crashing down on them. Though trapped underneath the rubble, Dr. Mirale Sidrer, 52, was able to reach a phone and call her husband, Moshe, also a doctor. But because of the quick medical response, she and her patient had already been evacuated by the time he had arrived just minutes later.

The first words out her mouth were, "How is my patient?"

Moments after he saw his wife at the hospital, Dr. Sidrer fell into a coma. When she regained consciousness two days later, the first words out her mouth were, "How is my patient?" This concern helps explain why she was trying to tend to her patient even as the paramedics were attempting to transport her from the scene.

Her patient, a 24-year-old Orthodox Jewish woman, has been married one year and she and her husband are trying to get pregnant. The young woman suffered severe internal injuries — in and around her stomach. Doctors cut out part of her abdomen and liver.

Just as miraculous was the survival of a young mother and her 2-year-old daughter, who were in the waiting room, just 10 feet from where the rocket hit. Both had shrapnel in their heads and were airlifted to Sheba hospital just outside of Tel Aviv, some 50 miles away.

The medium-range Grad rocket with approximately 40 pounds of high-powered explosives smashed into perhaps the ideal spot: the roof's support beam. Had it entered the building even a few feet lower, it almost certainly would have gone through the floor and into the crowded shopping areas below.

Given the early evening hour, stores were doing brisk business with people just off work — and the health clinic was not nearly as full as it had been just hours earlier. A doctor who worked near the one directly hit was actually outside smoking at that very moment. With typically dark Israeli humor, that doctor has been heard by many quipping, "Who says cigarettes kill?"

Most remarkable is Israeli resilience. The health clinic was set to reopen within just one and a half weeks. Dr. Sidrer plans to return to the clinic once she is healthy, though that won't be anytime soon. The husband of the young mother injured in the waiting room was quoted in Ynet News expressing his determination not to abandon Ashkelon.

Anger with Israeli Prime Minister Ehud Olmert is palpable on the street and in cafés, as ordinary Israelis feel that their leader, who is in enmeshed in a very serious corruption probe, is doing far more to save himself than to protect them.

But in the Barzilay hospital in Ashkelon, the victims and their family members are just trying to grapple with the physical and psychological trauma that won't soon fade away. Absent is any bloodthirst or desire for revenge. Not from the victims, nor from their loved ones. Not from the broader Israeli public, either. CNN referred to the rocket attack as part of "tit-for-tat violence," but Israel didn't respond by hitting a Palestinian medical clinic or any other civilian target, for that matter.

In the very same Ashkelon hospital, in fact, there are many Palestinian and Israeli Arab patients, treated side-by-side with Jews. Barzilay treats Gazans unable to receive adequate care locally, meaning everyone from cancer patients to victims of Hamas violence. One 30-something Palestinian man just down the hall from the victims noted, "There is no difference between how doctors here treat Arabs and Jews. There are no politics in the treatment."

A little overwhelmed that none of the women or the little girl in the immediate area of the rocket strike died, hospital spokeswoman Lea Malul resorted to quoting the late, great Israeli playwright and satirist Ephraim Kishon. "Israel," she said, "is a country where nobody expects miracles, but everybody takes them for granted."

This article originally appeared in the Washington Times.

Mr. Mowbray is an investigative writer based in New York City.

Coming Home from Gaza
Why My Iranian Mother Didn’t Want Me to Become a Religious Fanatic
The Jewish History of Prague
Why the Sexual Revolution was Bad for Women
Comments
MOST POPULAR IN Israel
Our privacy policy
Aish.com Is Looking for Great Writers