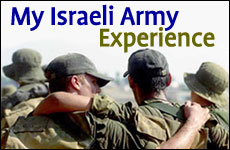 It's been a just over a year since I joined the Israeli army and I never thought I would enjoy anything as much as this. The thrills, and excitement, the ups and downs, everyday is nothing like the previous.

Throughout high school I wanted to join the American army. I was a patriot; the Star Spangled Banner always brought a tear to my eye. My parents were not too excited about the idea. After many talks, I had an epiphany. I'm a Jew and by joining the Israeli army, I'd be defending my people in our homeland. No matter what type of Jew you are, we are all part of the great Jewish nation. We are family, brothers in arms, and this is truly the land of the free and the home of the brave.

So I joined the IDF in March 2007, and I was completely unprepared. How could I be? All the movies and TV shows I've seen about what happens in the American army portray a very intense and abusive lifestyle, so that's what I was expecting. Luckily my experience was far from that.

Our commanders and officers sat us down on the first day and told us all that the only way we would succeed was to love and respect one another. With the support of your fellow soldier you could do a lot; hop the wall, crawl under barbed wire, and climb up and down roofs. But with the support of your commanders and officers you could do anything; bust smugglers, capture escapees, and arrest terrorists.

Training was hell. There was the obstacle course, the weeks spent in the field, learning how to shoot, where to hide, where the enemy hides, you get the drill. There were the 3 a.m. wake-up calls, especially torturous after not being allowed to go to sleep until 1:30 a.m. There was the tear gas tent where you were forced to run half a kilometer, do 30 push-ups while wearing a mask, then enter a tent filled with tear gas and remove the mask to see how long you could last, while being detained inside by the officer inside (who is wearing a mask).

We had many, many, many hikes. We covered many, many, many kilometers. But they weren't just simple hikes; we would walk 20 kilometers over mountainous terrain before pulling out three or four stretchers, loading the lucky few on top (somehow it was always the same people), hoisting a couple more upon our shoulders and continuing on. All the time getting yelled at by our commanders – about how we were weak, and have to continue and no giving up. 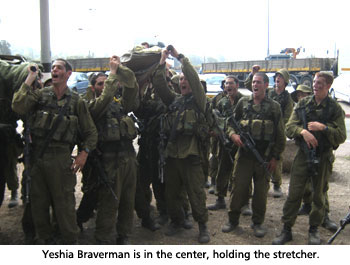 But back to that support and love. Everyone was working as a team although every once in a while we had races and competitions to see who was better and where everyone was health wise.

One of the races was to complete 86 sit ups followed by 75 pushups, after which you had to run two kilometers in under nine minutes. If you didn't pass, you were embarrassed and would have to take it again until you succeeded.

During one of the runs I witnessed one of the most beautiful, unselfish acts. We had just finished the first circle and were coming around for the second when I noticed a couple of people falling back, exhausted. I thought to myself, What a shame. They're going to have to do it again. Then I saw the lead runner and his best friend stop, turn around, and start running in the opposite direction. They had gone back for the laggers and started running alongside them, cheering them on and basically luring them back into the race.

They didn't end up passing, but they didn't mind – they had achieved something else: they had showed everyone else what's truly important. That's when we started creating a loving friendship between all of us. And that's what got us through all the training.

The day before we were released for a short vacation for the High Holidays, one of our main officers called the entire company together for a talk. This was in middle of training and there is this sort of distance between you and your commander. You are not allowed to talk to him without his permission, and even then only with great respect, you have to always remember that you are just a private and he is a first or second lieutenant. He told us to have a good holiday and then he said something which no one could believe.

On behalf of all the officers and commanders, he asked us for forgiveness. He told us that all the times they had yelled at us or talked down was just for our benefit and was never anything personal. If any of us had been insulted he just wanted to say sorry and to clarify that it came from the heart, for our own good. He made it clear that we were all in this together – as Jews, as brothers, as part of Klal Yisrael, the Jewish people. And then he wished us "Good Yom Tov."

I was beginning to realize this really is an army like no other.

A Wedding for the Jewish People