The Jewish Ethicist - Thou Shalt Pay 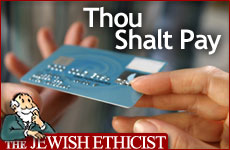 Payment is not only a right of the creditor, it is also the duty of the debtor.

Q. I gave a check to a local merchant, but it hasn't been cashed in months. Probably they lost it. Do I have to tell them?

A. It should be obvious that there is an ethical obligation to pay for merchandise. One way this obligation is reflected in Jewish law is in the Talmudic dictum, "It is a commandment for the debtor to repay".

Here is the passage in context:

Rav Cahana said to Rav Pappa, since you say that it is a mitzvah for the debtor to repay, what if he says I'm not interested in doing a mitzvah?

Rav Pappa replied that just as a person can be punished for transgressing a negative commandment, he can be compelled to fulfill a positive one. It makes no difference if it is a ritual commandment like making a sukkah or taking the lulav on Sukkot, or a commercial commandment like paying a loan. (1)

Rav Pappa is teaching us that a loan is not merely a right of the creditor to collect; it is a positive religious obligation of the debtor to pay.

It is true that in practice we expect the creditor to demand payment in some way. For instance, in many businesses it is customary for the service provider to send a bill. If the bill is late in coming, the customer generally doesn't have to take the initiative to go ahead and send the money.

Apparently the custom of waiting for the creditor to ask for the money is ancient, as it is discussed in many early authorities. The rabbinical authorities explain this custom can be justified because if the creditor delays asking for the money, it may possibly be that he is consciously allowing the debtor a little more time to give back the money. The rabbis understood that the commercial mentality is not necessarily synonymous with a "dog eat dog" mentality, and that even in commercial dealings a person may want to give the other party a break. (2)

However, this rationale makes sense only if we are sure that the creditor is aware of the outstanding debt, but for some reason is dilatory in collecting it. If you know that this merchant is often late in cashing checks, you would be justified in hanging on for a while before notifying them.

If on the other hand you think it is likely that your check has been lost or forgotten, then the original commandment to repay applies. At the very least you should notify the person to clarify the situation.

The same principle applies to another question sent by a reader: If you buy your ticket on the train from the conductor, you pay extra for the service. But what if the conductor never comes? I don't think you then have to pay for a ticket at the station when you get off; after all, you opted for a different service. But you do have to invest reasonable effort in finding a conductor or grabbing one's attention, in order to pay for the service that you selected. There is no need to comb the entire train, but simply biding your time in your seat could easily be interpreted as trying to avoid attention and escape payment.

IMPORTANT NOTE: Last week I wrote about providing facilities for the very risky business of day trading. I suggested that this is an inappropriate business unless certain safeguards are present, such as providing accurate information about the chances of success and insisting on an extended dry run with simulated trades to impress on newcomers the dangers of the trade. A number of readers wrote that a great many facilities do indeed insist on these safeguards. I am happy to hear it and to qualify my statements by saying I don't mean to pass judgment on the "average" day trading facility. My main message was, and remains, that this is business is ethically risky and a number of safeguards are necessary in order to run it in a responsible fashion.

The Jewish Ethicist #3 The Upshot on Downloading MP3s

The Jewish Ethicist - The Whole Truth

The Jewish Ethicist: Should I Tell the Boss?
Should I Break Up, Get Engaged or Keep Dating?
Time Is Your Precious Commodity
A Constant World in Flux
Comments
MOST POPULAR IN Current Issues
Our privacy policy